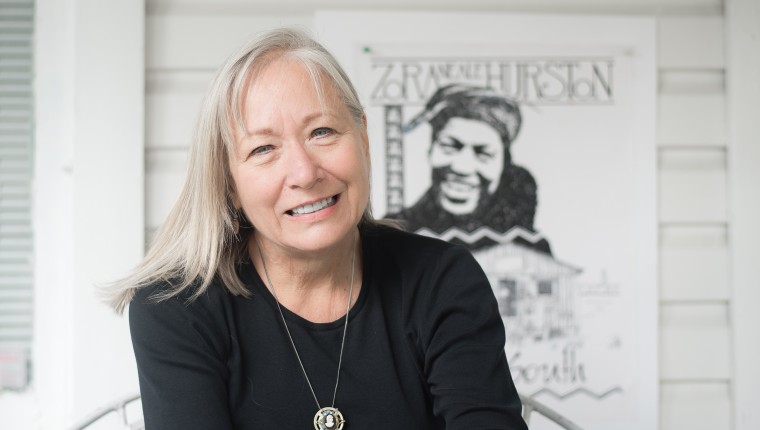 Kristy Andersen is an Emmy award-winning documentary filmmaker whose work is centric to Florida, where she has worked for more than 40 years. The documentary, ZORA NEALE HURSTON: JUMP AT THE SUN, is her legacy film, the seminal story of the pioneering Florida anthropologist, and author of “Their Eyes Were Watching God.” It was awarded grants from the NEA, NEH, Ford Foundation, Corporation for Public Broadcasting, the National Black Programming Consortium, humanities councils in eight states, and many others. The blockbuster film, praised by critics across America, was one of only five included in PBS’ American Masters 2008 series, winning the Primetime Emmy for Outstanding Nonfiction series. Andersen’s first documentary, BAY BOTTOM BLUES, explored the demise of Tampa Bay after losing most of its seagrasses and mangroves, and was nominated for an Emmy. It was followed by SEA TURTLES’ LAST DANCE about the endangered kemps’ ridley sea turtle, and was broadcast nationwide on PBS, winning a Southeastern Region EMMY for Writing. After years of producing and writing and working with film crews, Andersen has made the switch from film to digital. She bought a camera and is now filming and editing her own work, relying on her past experiences from filmmaking classes at the University of Florida, and as a news editor at various Tampa Bay television stations. Recent grants from the Florida Division of Cultural Affairs have been awarded to her on-going work. SNOWBIRD is about Jack Kerouac’s tumultuous eleven intermittent years living in the Sunshine State, from when On The Road was published in 1957 while he lived in Orlando, to his death in St. Petersburg in 1969. Another film, GROWING UP POSITIVE, follows the lives of seven HIV positive young adults who as infants were born with HIV. It has been awarded support from USF and USFSP, and the Florida Department of State. Andersen’s work has been screened at The Louvre in Paris, the National Gallery of Art in Washington, DC, the Ne