2021 marks the 45th anniversary of NASA’s Viking Project, the first U.S. mission to land a spacecraft safely on Mars and return images of the surface. Three separate missions are currently on their way to Mars, and crewed missions are being planned by both governments and private corporations.

Stories may be set…

…in the past (What if the U.S. and the Soviet Union had continued the Space Race from the Moon to Mars? What if the Viking rovers had discovered evidence of life back in the 1970s?)

…in the present (What challenges must astronauts, scientists and engineers overcome in order to send humans to Mars? Should human space exploration be spearheaded by governments or corporations?)

…or in the future (How will future Mars settlers differ from Earth residents? What kind of society will they build?)

Entries will be judged by a panel of experts. The Grand Prize winner will receive a $200 grand prize, an invitation to read as a presenting author at the 2021 Tampa Bay Times Festival of Reading and a grand prize plaque. The winning story will be published on the contest website.

Details and an online entry form can be found here. 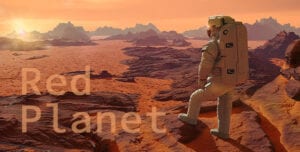