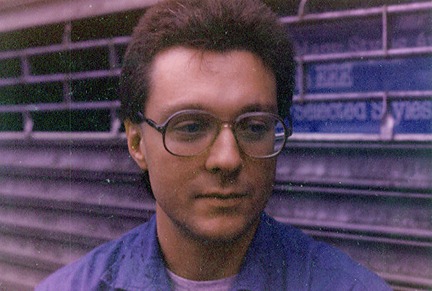 In 1979 I graduated with a BFA from The Cooper Union in New York City and was thrust into an unwelcoming world with a diploma of dubious value. I was well-versed in art history, metalworking, and conceptual art, but ill prepared to make a living. When I told prospective employers I went to Cooper Union their usual reaction was a vacant stare and the bewildered query, “Cooper what?”

After bouncing around rather aimlessly for a few years working first as a gym instructor and then later as a newspaper illustrator, I somewhat miraculously got an interview for a TV graphic artist job with the Graphics Director of ABC network News on West 57th Street in Manhattan. His name was Ben Blank. He was known as, The Father of News Graphics.

Ben made his mark back in 1957 at CBS. He put a ping pong ball on the end of a coat hanger and waved it in front of a drawing of the earth to illustrate how Sputnik was orbiting the planet. It was a special effects sensation and his reputation as a pioneer in TV graphics had begun. John Hockenberry, in his 2006 book, Looking Closer: Critical Writings on Graphic Design, called Blank the “television graphic artist’s equivalent of Homer, Marshall McLuhan, and Edward R. Murrow rolled into one.” Legendary CBS News anchor Walter Cronkite described Blank as “a pioneer of television graphics at a time when his artistry and genius were all we had to demonstrate a complicated story”

The only reason Ben deigned to see me was that he also attended Cooper Union. To my amazement he bemoaned the fact that there were no “Cooper men” in the department. He now had the opportunity to reverse this dearth.

My portfolio was a hodge-podge of drawings I had done for the newspaper, and photos of my sculpture, none of it had anything to do with the kind of graphics created for TV.

He flipped through the pages clenching a black wet cigar in his teeth. He grunted and coughed. I couldn’t take my eyes off a dangling gray ash the size of a small depth charge on the end of his stogie that finally dropped off and exploded into dust on my portfolio. He didn’t notice or didn’t care. Then he said, “I’ll tell ya what. You can draw. Call George Fox next week and tell him I said to put you on the schedule as a per diem artist. We’ll try you out.”

“It’s about time we had a Cooper man in here.”

I floated out of his office ten feet off the ground.

It was 1982. A time when the Big Three Networks, NBC, CBS and ABC, were the only game in town. They ruled the airwaves. People had to actually sit down in front of the tube and watch a show when it aired. It was pre-Tivo, pre-DVD, pre-CNN, pre-internet. But it was cutting-edge at the time.

I was poised on the brink of success, ready to assume the role as a per diem broadcast graphic artist at ABC when the unthinkable happened. George Fox wouldn’t take my calls. He stone-walled me.

I tried calling the department several times a day for a week and finally got him on the phone. He was surly with no stomach for small talk.

“Whattya keep calling for? There’s no room on the schedule for you. Stop calling.”

“But Ben said you would put me on the schedule a week ago.”

“Well he never told me.”

“Ask him. He said he wanted me to start working per diem.”

“Ben’s not here. He’s in the hospital and won’t be back till the end of the month and that’s that.”

‘But nothing, Goodbye.” And he hung up the phone.

The whole unfortunate episode began when Ben got into a disagreement with his brother-in-law, Henry Chigger. Ben had hired Henry ten years earlier even though he had no qualifications as an artist. Ben regretted it ever since. You see, Henry resented Ben’s authority and did everything he could to irk him. What’s more, he couldn’t be fired. It was a union shop and Henry was the Shop Steward to boot.

The two had a heated argument in Ben’s office and it came to blows. Henry’s finger ended up in Ben’s cheek while Ben threw a slow-motion punch at Henry. It was a rather pathetic fracas, but the stress was enough to cause Ben’s gall bladder to implode.

I waited several weeks for Ben to regain his health before I had a chance to work in the department, but I was finally put on the schedule.

Damn George Fox and Henry Chigger too. Funny how my destiny was wrapped up with two men who couldn’t care less about me. But it all worked out well in the end. Sort of.

The desk I was assigned to was right next to Henry Chigger’s desk. It was vacant because no one wanted to be near Henry. He had nothing to do all day except read the papers, do crossword puzzles, and harass people.

What never failed to piss everyone off was when he would sing with a mocking twang, “RRR-ita, RRR-ita, RRR-ita.” Rolling the “R’s” to create a spine-tingling sound akin to fingernails being scratched on a blackboard.

He used to chide me, “Slow down, Sonny-boy. Whattya trying to do, make everyone look bad? You get paid the same whether you make one graphic or ten. Keep it up and you’ll bust a nut. RRR-ita, RRR-ita, RRR-ita!”

On many occasions he would be downright mean, “You know you’ll never get hired. You’re low-man on the totem pole. You’re per diem. George can take you off the schedule like that.” He snapped his pudgy fingers and sneered. “The union hasn’t hired anyone in five years and there’s no chance of you being made permanent. When the time comes, you’re the first one on the list to be let-go.”

One day something came into the department that changed everything. It was called a “Paintbox”.

Kickbacks, Old Men, and a Frog in the Rain

The mandate was handed down from the head of Broadcast Operations to Ben Blank, do something with the Paintbox. Make it work. The powers that be wanted to justify their expenditure on this cutting edge piece of equipment being touted as the next big thing in broadcast graphics. All the hubbub was over the fact that it cost half-a-million dollars.

Surprisingly, Ben was against using the Paintbox. The reason was it interfered with a lucrative illegal kickback scheme he had with the suppliers of matt boards, pencils, paint, press type, and the tons of other art supplies purchased by the department. He got a cut of everything the graphics department used. If the Paintbox was going to create graphics electronically there would be no need for art supplies and his payola would go out the window. He wasn’t about to let that happen.

Ben was in a pickle. On one hand, if the paintbox was successful, his graft from the suppliers was in jeopardy, on the other hand wanted his reputation as the Father of TV Graphics to be upheld. He couldn’t stand the idea of giving up the kickbacks, but his ego made him want to be the hero of this new broadcast technology.

He made a Solomon-like choice. In a half-hearted gesture of giving the paintbox a chance, he decided to send all the senior artists to be trained. They had the most seniority and experience in the department. They were also old men, and as it turned out, it was difficult for them to learn new tricks. It was a brilliant move by Ben. If the Paintbox failed it would be because it was ill-suited as an artist’s tool and not for his lack of trying to prove it’s workability. Ben’s goal was to maintain the status quo and keep taking his graft on the art supplies.

The scheme very nearly worked. After weeks of training it was time for the director of World News, Charlie Heinz, to come in and see what the Paintbox could do. As Ben and Charlie stood in front of the Paintbox monitor in a darkened room, the senior artists took turns fumbling haplessly with the machine. I made sure to be present in the back of the room to see what was going on. It was excruciating to watch. None of them seemed to have any idea of how to operate the paintbox’s most basic functions. All they managed to show Charlie were crude doodles, circles, squares and screens of solid colors.

Charlie finally said, “Well, I’ll be damned, can it make anything we can use on the air?”

Charlie was under the same pressure to make use of the Paintbox as Ben was, but Charlie had no ulterior motives.

“Ah, Charlie, ah, we’ve only had the machine a, ah, a few weeks.” Ben stammered.

Neither Ben nor Charlie knew that I had been working on the Paintbox in the wee hours when no one was around except the bleary eyed denizens of the graveyard shift. Since I was low-man on the totem pole, I was put on the dreaded overnight shift that no one wanted, and as a result was able to go into the room where the machine was installed and fiddle away with impunity. During the day this was impossible, admittance to that room was strictly verboten to the likes of me. I literally wasn’t allowed to touch it during the day because I wasn’t a member of NABET, the National Association of Broadcast Engineers and Technicians. Only Nabes, as they were called, were allowed to touch any electronic equipment involved in broadcast production. Breaking that rule would get you in a lot of hot water with the union, and most likely fired for a per diem artist like me.

Paradoxically, the Paintbox was designed to be used by artists, not engineers. It had functions called stencils, airbrush, cut and paste – things artists understood. It seemed very easy to use and intuitive to me. You didn’t have to go near a keyboard to paint, draw and create anything you could with conventional art supplies. It was all done with a pencil-like cursor and a large tablet. It was a wonderful, magical machine.

As Ben continued to stutter and sweat, apoplectic about the dismal showing, I spoke up. “Ben, can I show you some stuff I’ve been doing on the machine.” It was highly improper for a per diem artist to put in his two cents when the director of World News Tonight and Ben were meeting with the senior artists. But Ben was so embarrassed and rattled, he agreed to take a look, perhaps to save face with Charlie.

During those long, lonely nights I had created the image of a colorful pipeline in forced perspective leading from a stylized factory, a ring of doctors huddled around an operating theater with an electronic pulse superimposed over it, and a human-faced frog sitting atop a mushroom in the rain. As I deftly navigated the menus showing what I had created while demonstrating how diverse and powerful the machine was. Ben, Charlie, and the senior artists were floored.

The next day I was hired as full-time staff, invited to join NABET, and was soon feeding graphics directly to the network control room to air on World News Tonight for the first time at ABC.