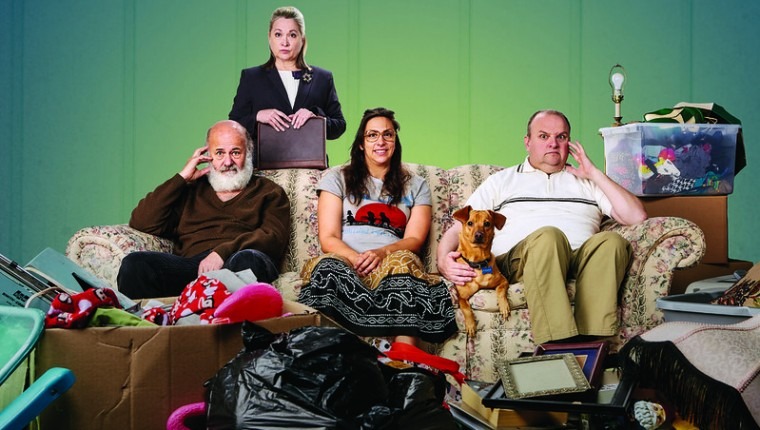 Her new play premiere was delayed due to Covid, so she wrote a novel instead.

Covid made its debut as a pandemic just days before the world premiere of Natalie Symons’ new play, The People Downstairs – American Stage’s first canceled full run going into lockdown.

Given Symons’ prolific past decade, it comes as no surprise that the St. Petersburg-based writer/actor shifted gears, finishing her first novel, Lies in Bone, which releases later this year. The coming-of-age story features a 20-year-old murder mystery and cover-up set in the 1980s, told from the POV of a young Springsteen fan.

Those who recall seeing Symons onstage might remember her from Urbanite’s Reborning, Stageworks’ Last of the Red Hot Lovers, American Stage’s The Foreigner, or one of her freeFall appearances – One Flew Over the Cuckoo’s Nest, An Empty Plate in the Café du Grande Boeuf, Becky Shaw or The Comedy of Errors.

She returns to her Buffalo NY hometown with The People Downstairs, a city where she says people laugh the loudest and only the most hot-headed and warm-hearted folks withstand the bitter cold. Like her 2015 Best of the Bay-winner The Buffalo Kings – a dysfunctional family-centered tragicomedy that brims with double-edged wit and pathos – we can expect to experience more of the same relatable moments in The People Downstairs. Its nuances caught the attention of BroadwayWorld, which honored the play with an Original Script of the Decade award.

Set in a cluttered apartment in the Black Rock neighborhood of Buffalo, The People Downstairs follows Miles (Allen Fitzpatrick), a boozy and boisterous funeral home custodian and his daughter Mabel (Sara Oliva), a middle-aged agoraphobic, whose raison d’etre involves prison inmate correspondences. When a court-appointed guardian (Teri Lazzara) threatens to take away their home and stolen poodle, Miles leaps into action by fixing up Mabel with Todd (Matthew McGee), a nerdy mortician who lives with his mother and pet hamster Stanley Kowalski (a cheeky nod to the infamous blind date in A Streetcar Named Desire).

According to American Stage’s press, The People Downstairs is “an endearing human comedy about love, loss, loneliness, and the healing power of laughter.”

And as luck would have it, American Stage filmed the slightly twisted family comedy while staging a preview performance on March 12, 2020, and will stream it March 29-April 4. The catch – you have to be a member of the theater to see it.

I had the pleasure of interviewing Symons before the pandemic became lockdown-official and caught up with her this week for some recent updates.

Julie Garisto: It must seem surreal that the play is streaming a year after its scheduled premiere.

Natalie Symons: It’s eerie to watch the recording of a play about isolation and the healing power of laughter and human connection on the eve before the world went dark, and it’s hard to believe it’s been over a year since the play was forced to close hours before opening night.

At least we got the previews in and saw all the pieces fit together in front of an audience. I’m happy to share the final preview recording with American Stage members.

JG: How do you think The People Downstairs will come across now?

NS: Oddly, I think the play will resonate perhaps more now that we’ve all experienced varying levels of isolation over these past 12 months.

JG: Has anything changed?

NS: Scott Cooper’s set is still standing and essentially the actors are still waiting for ‘places.’ The plan is to finally world-premiere the play live at American Stage when we can come together in a shared space. When it happens — it will be cathartic for me to say the least.

JG: What I love about your humor is that it doesn’t compromise believability. Your stories can come across as emotionally raw and sad while making the audience laugh out loud. How do you strike the balance?

NS: Some of the storytelling in theater is issue-driven and there is a lot of heavier subjects, which are very important, too, of course… A filmmaker that inspires me a lot is Alexander Payne. He directs these beautiful movies that straddle comedy and pathos. I like the idea that oftentimes we can be having a moment of sadness at the same exact moment that something outlandish or very humorous is happening.

JG: You mentioned to me that you rewatched Nebraska, one of Payne’s films. That film features an aging patriarch, which you also write about in The People Downstairs and The Buffalo Kings.

NS: Every moment in this movie is equally tragic and funny. When I watched it, I just felt myself feeling all of these feelings of, ‘Oh my God, my heart is breaking.’ And yet you can’t stop laughing because the story is told in a way that is so humorous.

NS: Yeah, absolutely. I see this with my parents. I see this with myself. The older we get, the more, obviously, we have experienced loss because it starts becoming more frequent. There’s so much loss. And yet in that loss, if we don’t laugh and we don’t find humor, my goodness, life could be pretty grim.

At the same time, a lot of my plays deal with regret and forgiveness and all of the things that we have to do to cope as we get older.

JG: How does one effectively cross that line from freaking people out with tragedy to bringing them up with the comedy? Is it in the timing?

NS: Yes, but I also think it is in the viewer, the person that’s experiencing it… I remember a moment in The Buffalo Kings, when Harold, the older patriarch, who has dementia, goes into the kitchen after he had just disappeared and shot a kid in the foot, and they bring them home. They’re sitting down to eat and there’s an explosion. It was a very comedic moment. And then Harold goes into the kitchen and starts eating cat food. I remember audiences laughing. And when I would watch this happen, they’d stop laughing…

In conversations afterward, I’d get feedback from people who said they felt bad for laughing because even though it’s cat food and it’s funny, it’s also horrifying. So, I find it interesting how humor catches audiences or readers off guard because they’re enjoying it.

JG: How was working with director Chris Crawford? Was he on the same page as you in setting the mood for The People Downstairs?

NS: Definitely. In rehearsals, Chris did a lot of developmental work with the actors on finding the right tone because you don’t want to play it too much like a farce. It has to have that underpinning of reality, and sometimes I’ve found that it can go the other way and be too deadpan, so we have to work with the actor and make sure we’re not playing to the joke.

JG: Reading about your new book set in a northern small town in the 1980s, certain elements bring to mind coming-of-age stories like Stranger Things and Super 8, minus the space creatures, of course.

My editor says Lies in Bone captures the reality of lower-income life in a neglected Rust Belt town. He calls it an intersection of literary fiction and mystery/thriller. Comparable titles would be Mystic River by Dennis Lehane or Sharp Objects by Gillian Flynn.

JG: So, we shouldn’t expect the same style of humor in Lies in Bone?

NS: It’s darker than my plays. But to me, it’s life-affirming, like my plays. I always strive to tell stories that celebrate the resilience of the human spirit.