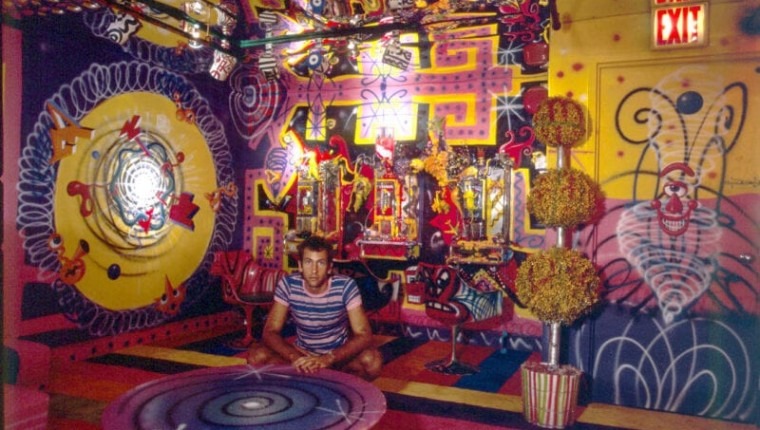 The Tampa Bay International Gay and Lesbian Film Festival and the Museum of Fine Arts in St. Pete are collaborating on a cool project once again.

The MFA’s hosted TGLIFF screenings in the past, but the upcoming Stories We Tell film series is different. For Stories We Tell, MFA Curator of Public Programs Margaret Murray chose films (with guidance from TGLIFF Director of Programming Derek Horne) focusing on the intersection of art and social justice.

“As we were putting together the series, it was important that we tell a story about American art and artists through a queer lens,” says Murray. “We [also] wanted to explore issues that we’re all grappling with, such as climate change, Black Lives Matter and other social justice and equality issues.”

The four films described below do all these things and more. Most importantly, they show us that art and film can inspire change – and they remind us that a creative life is a life well-lived.

The Patron Saint of Pop Culture tells the story of one of Tampa Bay’s most talented and visible LGBTQ+ street artists, Cam Parker. In our social media age, Parker’s becoming just as well-known for his selfies as he is for his murals of present-day pop culture icons in Tampa and St. Pete.

If you’re not familiar with Parker’s work, I recommend checking out his murals of Lady Gaga at 1701 N Franklin St. in Tampa Heights, Dr. BBQ on the side of Dr. BBQ restaurant in St. Pete’s Edge District, and several more pop culture icons inside Southern Nights in Ybor City.

Or you could just watch this short documentary film by Candace Williamson and Taylour Marks aka Millianson Productions.

Kenny Scharf lived in NYC’s East Village in the 1980s, hanging out with Keith Haring, Jean-Michel Basquiat and Andy Warhol, and painting pop culture icons like the Flintstones and Jetsons.

“The Kenny Scharf documentary allows us to explore environmentalism as well as how the art world has changed for LGBT artists in the decades since Kenny, Keith Haring and Jean-Michel Basquiat were truly changing the face of art,” Murray told Creative Pinellas. “And while Kenny doesn’t identify as gay, he was certainly a strong ally and advocate for the work of queer artists.”

“Looking back, I think Kenny Scharf is one of my favorite painters,” says TGLIFF Director of Programming Derek Horne. “It’s the kind of stuff I enjoy because his paintings are like films or animations — they tell stories and they’re fantastical and fun to look at.

“They’re the kind of paintings that speak to me. They’re very colorful, and his personality is so inspiring, as you’ll see in the documentary. This was a life very well-lived.”

The most interesting things Scharf’s created are his “Cosmic Caverns,” trippy Day-Glo and black light-fueled art installations he’s known for throwing dance parties in. That little tidbit alone is enough to make me watch this new documentary, co-directed by Malia Scharf, who follows her father’s life and work from the late 1970s through the present day.

“Everything he does in life has an artistic bent,” says Horne, “like when he’s recycling materials and decorating his house. He just lives and breathes art. His life itself is a work of art.”

Agnes Gund’s accomplishments include founding Studio in a School, which brought art education to NYC public schools during the NYC financial crises of 1977 and is still in action, presiding over the Museum of Modern Art’s golden years in the 1990s and creating the Art for Justice Fund with her friend Darren Walker at the Ford Foundation in 2017, to end racially biased mass incarceration through art and advocacy.

“Aggie’s story of one philanthropist using revenue from a blue-chip art sale to fund social justice programs, including the restoration of voting rights here in Florida, easily fits into the narrative we wanted to explore – that art can affect social change,” says Murray.

The documentary also illuminates film’s ability to inspire change. “There’s a key moment in Aggie when seeing one film —  ‘13th’ by Ava DuVernay — changed the trajectory of Agnes Gund’s life and the lives of so many people.”

Cleophas and His Own

The series concludes at the MFA’s Marly Room with Cleophas and His Own, a film based on a 13-chapter poem written by American painter Marsden Hartley after losing a young man he loved in the Atlantic hurricane of September 19, 1936.

Cleophas and His Own brings Hartley’s work to life, dancing between his narrative in black and white and his paintings in full color. The MFA chose the 2005 film for the series because they currently have Hartley’s “Give Us This Day” on loan. See both at the MFA. Thanks to TGLIFF, you can view most of the Stories We Tell films at home via Eventive for a small fee of $5 (free for MFA members).

If you don’t enjoy watching films on your laptop, I recommend downloading the Eventive app onto your streaming device — it’s available on Apple TV, Roku and Fire TV — so you can watch these films on your big screen (or at least a bigger screen than your computer). It makes for much better home viewing.

Here’s how it works – first you unlock the film on your computer using the link you receive after purchasing your ticket. Then you’ll be able to pull the movie up in the Eventive content library on your steaming device during the designated rental interval. Once you unlock the film and click Play, you have 24 hours to finish watching it. You must unlock and click Play by 7 pm Sunday to enjoy these films and associated Q&As through Eventive.

To find out if your streaming device is compatible with Eventive and explore additional viewing options, visit help.eventive.org/en/articles/3922588-audience-faq.

In-person at the MFA on July 25 The fourth and final film in the Stories We Tell series, Cleophas and His Own, screens at the MFA’s Marly Room on Sunday afternoon.

“It’s a beautiful ballroom, seating about 220 people, that has great acoustics and is a great, intimate place to watch a film,” Murray explains. “As our primary event space, we have hosted rock bands, cooking demonstrations, lectures and wedding receptions there. We remodeled it during the pandemic, and I’m excited to show off this beautiful space!”