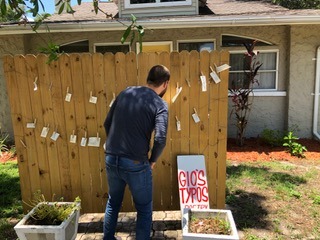 “I have always imagined Paradise as a kind of library.”

I thought of that quote by Argentinian writer Jorge Luis Borges when all the public libraries were forced to closed down last spring and we were plunged into a kind of purgatory. A Paradise lost.

But not every place offering free books shut down when COVID-19 hit. Throughout Pinellas County, hundreds of libraries have stayed open for business throughout the pandemic — they are just a lot smaller than the ones with circulation desks and reading rooms. Tiny lending book boxes set up in parks and in front of schools, museums, places of business and private homes, they are little bits of heaven where people invite their neighbors to take a book and leave a book.

Have people continued to stock and use these wee free libraries during the pandemic?

“At first people did seem a little wary to use the boxes but I think there is less fear now,” says Mitzi Gordon, who regularly restocks her own little library, a refurbished Tampa Tribune box in front of her home in the Live Oaks neighborhood of St. Petersburg at 5621 4th Avenue N. “I keep the handle and surfaces sanitized, and it gets regular traffic,” reports Gordon, a former executive director of Creative Pinellas.

Gordon found the old Tribune box in a vacant lot in Tampa last fall. Her parents helped her load it up so she could bring it back to St. Pete, where she and her partner gave it new life.  “We had to cut off the old padlock, repaint the box, pound out some dents, and replace the front plexiglass panel,” she says.

Gordon, who is one of the founders of St. Pete Women’s Collective and Venus, the collective’s headquarters and art space in downtown St. Petersburg, is perhaps best known for creating the Bluebird Book Bus, a vehicle she turned into a roving book mobile. Now out of commission — the bus is parked at her house — she sold books out of the traveling bookstore, but also gave many of them away.

The bus is slated to find a permanent home at Crab Devil’s Peninsularium, an art collective currently being built in Ybor Heights at 3800 N. Nebraska Ave. in Tampa.

“The Bluebird Book Bus did offer free book exchange at events, and also sometimes took cash donations in exchange for books – so it could definitely be considered a giant free library on wheels!” Gordon says. “My vision for its future location in the Peninsularium includes a section of free locally-made zines, as well as a browsing library of Florida-centric books.”

The original idea for little free libraries began in Hudson, Wisconsin with Todd Bol who set up the first library-on-a-stick in 2009 to honor his mother. He made it out of his old garage door to look like a little schoolhouse.

The idea caught on. Bol and his partner Rick Brooks began to build and install free little libraries throughout the Midwest and soon unique little boxes filled with books to share were popping up all over the world. Incorporating as a nonprofit organization in 2012, Little Free Libraries, according to its website, now boasts over 100,000 book-sharing boxes worldwide.

Individuals and organizations putting up library boxes can register their lending libraries at the site by buying a Little Free Library sign for $39.95 which is engraved with a unique charter number. Those registering can also opt to be included on the site’s map.

The site map at littlefreelibrary.org shows the location of scores of lending libraries in this area. In April 2014, the Safety Harbor Public Library decided to join the global Little Free Library movement. Joining with the city to set up 14 sites, the library offers a brochure with their locations.

The one in Honeymoon Island State Park was sponsored by The Friends of the Island Parks, built by the employees of Honeymoon Island and designed to resemble the original huts that were built to accommodate newlyweds back in the early 1900s. Another in downtown Dunedin on Main Street, was donated by the Dunedin Friends of the Library and painted by Dunedin artist Steve Spathelf who chose to depict the train that once ran through the town (nearby is the Boxcar Cafe & Gift Shop, created from one of its cars).

The book box at Hammock Park was set up by Elizabeth Faubert (whose email handle is ‘booksnob’). On the map site, she posted this note:

“Dunedin, Florida is a very artist-friendly community, many artists live and work here. I myself am an artist and I feel very supported by my community. When I decided I wanted to build a Little Free Library, I wanted to involve other artists also. So after I built the box I invited three friends of mine to participate in the decorating. Each of us took a side and expressed ourselves. We chose a dog-centric theme because we knew we wanted the box to be placed in Hammock Park where many folks walk.”

The stories behind these little neighborhood lending libraries are often as interesting as the boxes themselves.

In May, Kristine and Michael Dowhan, struggling to cope with COVID-19, set up an old china hutch in front of their Snell Isle home and filled it with books, inviting neighbors to stop by for a free book. The hutch was so popular that a neighbor left a blank book inside with a note which read in part:

When I noticed this little free library in our neighborhood, I couldn’t help but be inspired. There is so much beautiful literature out there, yet the only thing that is lacking is some stories of our own. It’s a strange time to be living in, this I know…I think it is important to find new ways of connecting…”

Signing his note R.S., he invited people stopping by to write down their stories. Kristine, touched by the gesture, was the first to share hers. Here is an excerpt:

“Like many our COViD journey has been difficult. My stepmother was on a ventilator for 13 days, hospitalized for 18. My father, oxygen for 3 days, hospitalized for 5. My husband has one lung, so we have been hiding since March 10th. It’s terrifying to know that if he gets COVID, he probably won’t make it… Like everyone else we have put plans and dreams on hold. I feel so sad for our world. Throughout all this, books have helped me go somewhere new, without the masks and disinfectant. Our little library has helped me feel connected to the world… I hope we won’t be strangers much longer.”

After the success of the hutch-turned-library, the Dowhans bought a 1940s-era oak phone booth for $700 from a New Jersey Craigslist seller and turned that into a lending library which they set up to replace the hutch.

Now they are turning old newspaper boxes into Little Free Libraries. One of them is installed next to the telephone-booth-turned-library to serve as a little children’s books library while the rest — 60 so far — are being set up throughout St. Petersburg.  They’ve chronicled their book sharing journey here, which includes a page thanking their sponsors: local librarians, the Tampa Bay Times, 321 Books used books, Little Free Library and First Book, a nonprofit making books accessible to kids in need.

The couple scrapes the boxes down, washes them, sands them, paints them and then delivers them to anyone who wants to host a Little Free Library in the St. Petersburg area. Each box steward can decorate the little library as they choose. There is no charge other than registration with the Little Free Library Network, which the Dowhans will assist with if needed.

The Dowhans also have set up a Facebook group for local community librarians to stay connected called St. Pete Shush (Librarians of the St. Petersburg Free Lending Libraries) (a group of librarians is called a shush) and a St Pete Shush Facebook page where anyone can keep up with Little Free Libraries in St. Petersburg.

In early August Kristine launched a St. Pete Shush Go Fund Me campaign to keep the books flowing in. At the end of August, they were able to install three boxes at North Shore Elementary School and three boxes on Snell Isle Blvd. The North Shore boxes were filled with books aimed at younger children. The Snell Isle boxes were filled with books, digital media and puzzles.

The WORD! Book Boxes project is also aimed at putting books into the hands of children. A joint initiative of the W.O.R.D. Initiative (Women Organizing Real Discussions) and Keep St. Pete Lit and sponsored by AARP-Tampa Bay and J Crayton Pruitt Foundation, the aim of the project is to improve literacy rates, instill pride of self and promote a scholarly culture within the children living in south St. Petersburg neighborhoods.

Initially launched with donations from Mitzi Gordon’s Bluebird Books Bus, new books are purchased through Cultured Books, a woman-owned, African-American pop-up children’s bookstore along the Deuces Corridor in South St. Petersburg whose stated mission is “to foster self love and broaden world views.

Cultured Books also offers another sort of book swap – kids can “buy” a book by presenting the bookstore with a book report. The bookstore will supply the kids with a free book and after reading their chosen book, those who create a report on it using music (including rap), poetry or art (including a drawing, painting or collage) or present a traditional written review will receive another book.

Once they turn in their book report, they can choose a new book. The cost of books is covered by The Book Report Project, a Cultured Books initiative to remove the financial barrier to books.

Not all the little free libraries in our area are registered on the Little Free Library network. “I come across new ones all the time,” says the book-obsessed Mitzi Gordon who points out that not everyone can afford the official LFL registration fee. Just the other day, for example, she passed by one on Burlington Avenue N. at 43rd Street in St. Petersburg. In addition to the books inside, it features a bird/squirrel feeder on top and dog treats inside.

To track all these independent, pop-up tiny libraries, Gordon is launching a local Mapping Project to supplement the Little Free Libraries map site. People who are interested in adding their book box location to her map project, or who want to inquire about sponsorship, can email her at bluebirdbooksbus@gmail.com.

The three socially-minded artists have repurposed two giant shipping containers — one emblazoned with the words Make and Play, the other with the words Read and Grow — to create a traveling art space they call SPACEcraft.  Funded by the Pinellas County Board of County Commissioners from the BP oil spill settlement funds, SPACEcraft was designed to have those containers travel to six county locations over two years. The group just had just set up at the first locale at 100 State Street in the east parking lot of City Hall in Oldsmar when the pandemic hit.

The two containers are still at the Oldsmar site. They are now opened to the public on Tuesdays and Thursdays from 6 p.m. until sunset. Entrance is limited to allow for social distancing and masks are required. Only one container is used at a time. In the container marked READ/GROW there are books and cozy spots for reading and magnetic strips on its walls where visitors can create their own poems.

Visitors can take away original poems anytime, thanks to Gio’s Typos, “a poet and typewriter,” who has set up a clothesline with poetry clipped to it outside the containers. It is a variation of Gio’s Typos’ Haiku Fence, a popular feature at St. Petersburg’s Saturday Morning Market before COVID-19 hit, now installed in the Euclid neighborhood of the city at 1190 8th St. N along with a sign that reads: “Take one. They’re 4 you.”