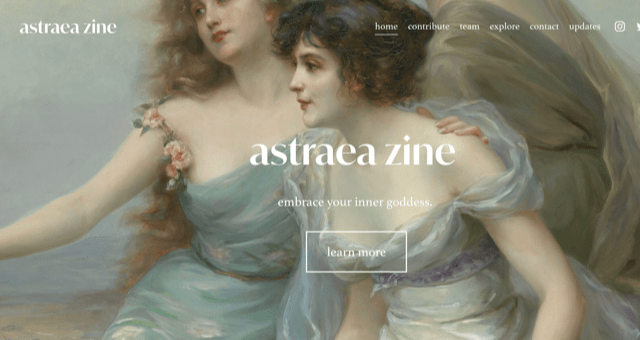 At 15 Emily Conner is running an online zine called Astraea. Astraeazine.com collects the creative work  — poetry, short stories, photography and visual art, including collages — of teens like her from all over the world.

“Astraea Zine project is a free & accessible platform for girls to share their art and writing with the world,” reads their mission statement.

“We aim to amplify the voices of girls around the world who do not have the resources or ability to express themselves. Our focus is   on photography, art, and writing by young women that shares their experiences with the world. Whether it’s a short story, a painting, or a picture, we want to help girls be heard.”

It is “a place where girls can embrace their inner goddess.”

Emily launched Astraea earlier this year as her service project for the Gold Award, the highest achievement for members of the Girl Scouts of the USA. Growing up in Savannah, Georgia (she moved to Palm Harbor when she was 8), Emily first learned about the Girl Scouts when she was five. After watching “Phineas and Ferb,” an animated musical-comedy television series on the Disney Channel which featured Girl Scout-like characters — the Fireside Girls, she told her mother that she wanted to join such a group. Her mother, Holly, decided to become a troop leader and create a Girl Scout troop so her daughter could join. Emily’s sister, now eight, is also a Girl Scout.

Emily is no stranger to service projects. For the Girl Scout’s Bronze Award she created 100 handmade dog collars for the service animals at Suncoast Service Dogs, based in Homosassa. To earn the Silver Award, she worked with two other girls to make 100 foster care bags, filled with soaps, school supplies and toothbrushes and donate them to Florida’s Guardian Ad Litem program for abused, abandoned and neglected children.

The Astraea project, however, is more of a long-term commitment for Emily.

“I plan to be Head Editor of Astraea until I graduate, and then with the team I built, I hope someone will take over,” Emily says when I reach her by telephone at her home in Palm Harbor. Transferring from Palm Harbor High School where she completed her freshman year, she will be attending St. Pete Collegiate High School as a sophomore this fall.

Astraea is named for the Greek goddess of justice, innocence, purity and precision. Emily came upon the name while doing a school project on mythology. “She’s a star goddess,” says Emily who is fascinated by astronomy and mythology and the idea of embracing your inner goddess.

Emily designed the astraeazine’s website using Square Space, a web-building site that offers templates she could customize. One of her inspirations was antifragilezine.com, a nonprofit media platform created by and for young female artists. “It doesn’t have the same look, but I like the way it’s run and that it emphasizes diversity,” she says.

Like that website, Emily added an Explore tab, a blog-like page where submissions can be posted. Already appearing under that tab are a poem and some “dark academia-themed collage kits.” Teens who create artwork using the collage images, are urged to submit the work at the site’s Contribute tab so the art can be included in the first issue.

Being a Girl Scout is not a requirement for submitting material or for joining the Astraea team. So far Emily has gathered a team of five editors, writers and illustrators to help her comb through the submissions and put out the first edition.

She recruited the team through various social media sites including Instagram, Twitter, Facebook, Pinterest and Tik Tok, putting out “a lot of hashtags about Greek mythology and astronomy.” “We are looking for people to help with photography, illustration, graphic design, editing and activism,” reads her shout out. “We’ll ask for specific mediums and some examples of your work. . .  Applications are open to anyone ages 13-18 who identifies as female or non-binary!” 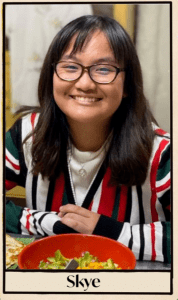 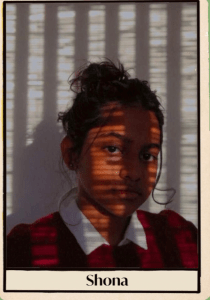 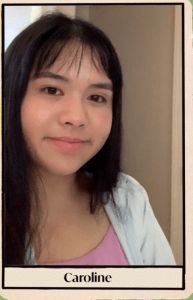 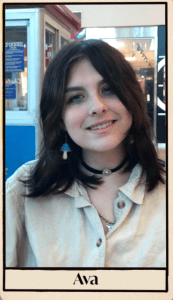 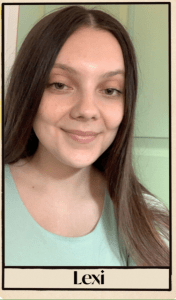 The members of the team hail from all over the world, including the U.S. (Florida, Indiana, California and Georgia), the Philippines and Sri Lanka. Emily as Head Editor is joined by Staff Editor Ava, Staff Writers Skye and Alexander, and Staff Illustrators Shonalya and Caroline,

For the first edition the team is not setting any limitations except age — anyone 10 to 21 are invited to submit all types of art and literature. “Whether it’s a painting, a short story, or a photo collage – we want it!” says Emily. For later editions, she hopes to create theme-based issues. There is also a print edition planned.

One poem already submitted is perfect for a zine named after a star goddess, says Emily. It’s about time and space and the stars.

Another, already posted on the site under the Explore tab, was written by team member Skye Cabrera (see Sidebar). Called “a love letter to perfection,” it is “about love and their experiences. . . about how love is taught to young girls,” says Emily.

“I want to create a place where girls can talk about pretty much anything.”

a love letter to perfection

as i observe the sea of people around me
i feel like a fisher getting a poor catch
another bad one, i ponder to myself
oh i wonder where the perfect one is

i dream of living it all
but logic says it is an unattainable dream
flaws bound humans to imperfection
and imperfection, i cannot learn to love

people may call me naïve or up in the air
but so what? isn’t that what love is
love is not just blind, oh no
it is naïve and ignorant

but one day, i’ll fall and i won’t hold back
i won’t stop myself from being grounded
though for now, i’ll drift in the clouds
and write this love letter to perfection

Volunteer positions to help with photography, graphic design,
writing, editing and activism are open to anyone age 13-18
who identifies as female or non-binary. Find out more here.