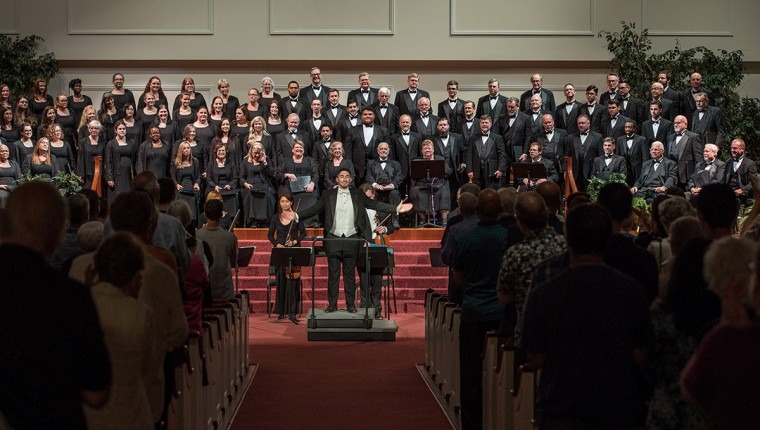 The area’s most vocal arts group just committed to a “return to the stage’’ after 18 months of virtual performances and projects that kept singers and audiences at an impersonal distance.

The Master Chorale of Tampa Bay will be back in concert halls this season, presenting big-ticket programs alongside musicians of The Florida Orchestra.
“The most devastating part of COVID was for a year-and-a-half we didn’t have our in-person choral community,’’ says Brett Karlin, artistic director for the chorale. “But on the other side of the coin, it’s energized singers to rejoin that community and enter the rehearsal room with more humility and appreciation for what we do. Now, the dedication to what we do will increase exponentially.’’

The transition from COVID-restricted virtual concerts to live shows hasn’t been easy, but by following federal health guidelines, the organization is ready for the curtain to rise, says Kara Dwyer, the chorale’s managing director.

“The CDC announced in March that it is now safe for fully-vaccinated people to sing in indoor choruses,” she says, adding that the group’s COVID Task Force partnered with Tampa General Hospital’s Infectious Disease Prevention Team to follow public health protocols.

Barring any COVID-related setbacks, the new season features Beethoven’s Ninth Symphony; Jake Runestad’s A Silence Haunts Me; the Requiems of Mozart and Faure; a world premiere commissioned by Haitian-American composer Sydney Guillaume; and a holiday program that will encourage audience members to raise your own voice in song.

A season highlight will be pairing the Beethoven with the Runestad, which is based on Beethoven’s Heiligenstadt Testament, a letter the composer wrote to his brothers in 1802 that reflects the despair over his growing deafness.

“A Silence Haunts Me is a dramatic choral monologue based on that letter,’’ Karlin says. “It quotes from Beethoven symphonies, and toward the end the musicians play – but without making any sound – so it reflects Beethoven’s loss of hearing. It’s unbelievable.’’

The Master Chorale commissioned Runestad’s
“We Can Mend the Sky” for a world premiere at USF in 2014
. . .
The season isn’t without a disappointment. Last year, the group teamed up with the orchestra for a planned performance of Bach’s rarely heard St. John Passion, which was cancelled because of the pandemic. However, it hasn’t been rescheduled. This would have been a symbolic program, being the first major work performed by the chorus at its inaugural 1979 concert under the direction of founder Robert Summer.
The Master Chorale celebrated its 40th birthday in 2019

Back then, the chorus included about 20 singers along with the University of South Florida’s University Singers and a small orchestra. By 1982, the group expanded to 85 singers and tackled Bach’s crowning work, the Mass in B Minor, the focal point of the week-long Choral Masterworks Festival in Tampa.

In 1986, it became the principal chorus of The Florida Orchestra – the state’s largest performing arts organization – a partnership that allowed for an expanded repertoire.

After rehearsals of the Durufle Requiem in 1988, the iconic choral conductor Robert Shaw called The Master Chorale of Tampa Bay “an absolutely superb chorus’’ with the “finest preparation I’ve ever heard in my life.’’

Early in the pandemic, the Master Chorale shared a hopeful virtual performance.

January 25-30 for Beethoven’s Symphony No. 9 and Runestad’s A Silence Haunts Me

April 1-3 for Faure’s Requiem and the Guillaume commission

Concerts are at the Straz Center for the Performing Arts in Tampa, Ruth Eckerd Hall in Clearwater and the Mahaffey Theater in St. Petersburg.

You can find details and ticket information
at MasterChorale.com