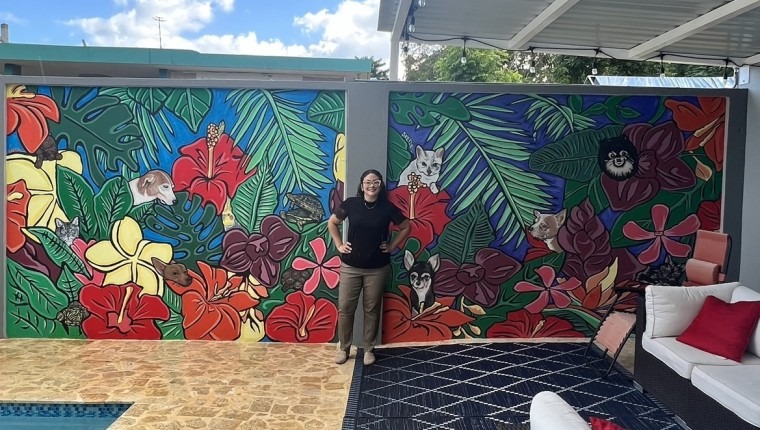 I completed my first ever mural! I knew having a mural in my portfolio could mean big things for my art career. Living in St. Pete, one of the biggest cities in the U.S known for its murals, there was no way I couldn’t attempt to do one. My biggest challenge was deciding where this mural would be and how to do it. That is until it was announced that I was a grantee. I immediately had the idea, and the funding, to fly home to Puerto Rico and purchase all the supplies necessary to paint it. I would finally have a mural under my belt and it would be super special because it would be in my hometown of Hatillo, Puerto Rico. All I had left to do was convince my mother to let me paint it in her backyard and that I could get it done in under 4 days.

My mother was probably the worst and best client I ever had. She didn’t trust my artistic advice whatsoever and yet she was ready to help assist me in anything I needed in the painting process. When we agreed on the final sketch I was off to Puerto Rico for the weekend. What was even better about the trip was that an emerging mural festival called El Grito Del Arte in a town away was happening at the same time. I was determined to attend. The countdown to completing the mural started the second I landed at 3:40 am.

Immediately I made the mistake of assuming I’d have time to sleep before sunrise and use my projector to begin my sketch. I overslept, I couldn’t project my drawing in the daylight, and it was mistake after mistake past that.  Thankfully my first mural was in my family’s backyard so I could learn the process one step at a time without the fear of not knowing entirely what I was doing. Hours behind schedule, I didn’t make it to the mural festival. 140 square feet in a total of 38 hours over the course of 4 days was finally complete with a couple of hours to spare before my flight that night. I decided at last minute to go look at the murals in the city of Lares even though the festival was officially over. With my business cards, stickers, and a copy of my coloring book in hand I figured maybe by chance I’d meet a local gallery owner or a prospective art collector. You just never know and I believe in being ready for opportunity. Sure enough, as I was being a tourist, taking selfies in the city square, a man approached me telling me all about the mural festival from the day before. As we were talking I explained how I flew in to complete a mural myself and that’s when he introduced himself. He was the organizer of the entire event and the person who had booked all of the artists! Perhaps had I went the day of the festival I would’ve never gotten a chance to meet this man. We exchanged information, he took a look at the mural I had only finished two hours prior, and he said I could paint a wall at next year’s event.

With that being said, a lot can happen in 4 days. I trial and errored my way through my first mural but it was certainly worth the trip. There was so much I learned in such a short span of time that no YouTube research could’ve prepared me for. I had to do it myself to learn what was best for me. I’m now ready for whatever adventure future murals hold for me. You can read more about the mural tips and tricks I learned and watch my mural in progress videos on my Instagram page Sketzii