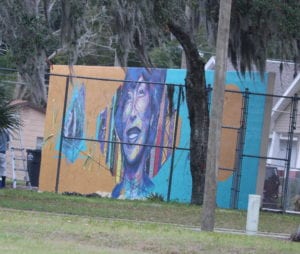 The Annual Zora! Festival of the Arts and Humanities celebrates the legendary anthropologist, folklorist, playwright, traveler and most-notable woman writer of the Harlem Renaissance — Zora Neale Hurston. Held annually in Hurston’s hometown of Eatonville, Florida, the 2020 Zora! festival fell on the 60th anniversary of Hurston’s death.

While she died penniless at the age of 69 (on January 28, 1960) and was buried in an unmarked grave — her genius forgotten about in the last decade of her life, her books out of print — today Hurston holds a near-mythic stature.

Through the research of writer Alice Walker and others in the 1970s and ‘80s, Hurston’s name rose like a phoenix to reclaim the spectacular achievements of her eccentric genius.  And each year since 1990, the Zora! Festival has helped maintain her status as a vital and creative contributor to American historical culture. 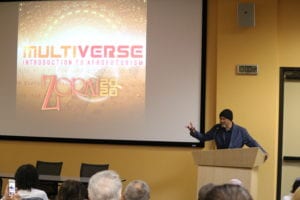 The 2020 Zora! week-long celebration held the theme Multiverse: Intro to Afrofuturism, kicking off the Festival’s five-year-cycle examining Hurston as the “Mother” of Afrofuturism. Afrofuturism describes cultural production — including science fiction, speculative fiction, film, art, fantasy and technology — that reveals, expounds upon, or interrogates how people of the African diaspora have found, and are finding, their “place” in the universe.

If one anchors the goal of Afrofuturism, at least in part, within that concept of “finding one’s place in the universe” there is no more apt progenitor to call “mother” than Hurston. Her intense curiosity, desire to examine roads less traveled, and insistence on pursuing her intellectual and emotional yearnings — alone and unhampered by the constraints of others — led her to follow a ‘lone-wolf’ path through life. Hers would be a journey marked by great love, society embrace and career fortune — mixed with equal doses of heartbreak, loneliness and destitution. 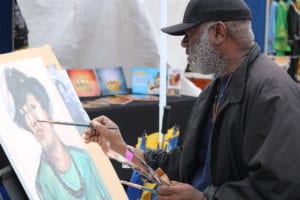 Born in Notasulga, Alabama, on January 7, 1891, by the age of three Hurston had moved with her family to Eatonville, Florida — where she spent her childhood and would write extensively about and return to during much of her life. She would bring fame to the town using it for subject matter in books including Mules and Men (1935), Their Eyes Were Watching God (1937) and the play Mule Bone, which she co-authored with Langston Hughes.

A successful writer who not only published books, plays and short stories, Hurston also wrote for journals including the Journal of American Folklore and the Saturday Evening Post. Hurston brought Eatonville nationwide publicity when, as a writer for the Roosevelt/New Deal WPA program, she added the town to the WPA’s Florida travel guide. 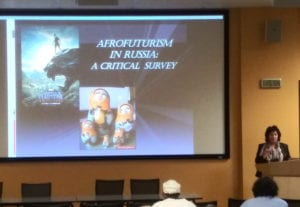 Undoubtedly a genius, Hurston studied at Howard University before transferring to become the first black student at Columbia University, where she studied ethnographic research and anthropology with Franz Boas. She went on to become the first African American female graduate of Barnard College.

Hurston was gathered among — and then shunned from — the exciting and culturally productive writers, poets and philosophers of the ‘20s and ‘30s Harlem Renaissance for her insistence on exploring the lives of rural blacks and writing in Southern dialect that class-conscious Northern blacks disdained and dismissed. 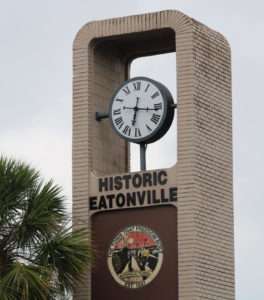 The reawakened interest in Hurston that occurred nearly two decades after her death spurred a flurry of biographies, reprints, plays based on her work, filmed documentaries (including Creative Pinellas Profession Artist Fellow Kristy Andersen’s award-winning documentary Zora Neale Hurston: Jump at the Sun) and television projects of her novels — all of which fell at exactly the right time for her to “save Eatonville.”

Incorporated in 1887 as the first all-black municipality in the U.S, Eatonville had remained majority black throughout the years. But by the 1950s, racist harassment from whites in surrounding cities had grown into attacks on the Eatonville community resulting in the murder of a black woman. Later, forced integration would turn its local college-prep high school into a technical school for the county and Eatonville youth would get bussed out of the town, away from the encouraging eyes of Eatonville’s wary elders. The town’s economy also struggled and Eatonville’s community slowly began to lose its cohesiveness.

In the mid-‘80s, when the county’s plans to put a highway through the main street and plop multiple retention ponds throughout the community clarified that the town was in danger, residents banded together to save Eatonville from further attack.  The Preserve Eatonville Community, Inc. (PEC) was formed in 1988 to protect the town from encroaching disturbance from the county. 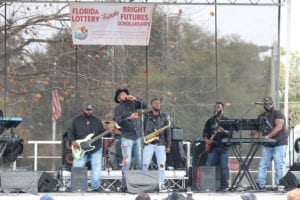 With Hurston back in the cultural canon, one of PEC’s first strategies was to hold a conference celebrating its famed daughter. The first Zora! Festival was held in 1990, drawing over 10,000 attendees and various celebrities. PEC’s gamble on the festival was a success — and with the annual attendance numbers, attention and aid of ongoing Zora! Festivals, by 1998, The Eatonville Historic District was designated and added to the National Register of Historic Places.

Fast forward to the 2020 Festival. Because Afrofuturism encompasses cultural production of the past, present and future, Hurston’s spirituality, metaphysical musings and anthropological studies fit well into this ongoing field of study. Hurston was the first to acknowledge herself as a “cosmic” being in a 1928 essay, “How It Feels to Be Colored Me:”

The cosmic Zora emerges. I belong to no race nor time. I am the eternal feminine
with its string of beads. I have no separate feeling about being an American citizen and colored.
I am merely a fragment of the Great Soul that surges within the boundaries.

Viewing Hurston’s impact and cultural significance through the lens of Afrofuturism has also encouraged continued exploration of her anthropological studies of spirituality as found in her seminal work of 1938, Tell My Horse: Voodoo and Life in Haiti and Jamaica, and reinvigorated her relevance for a new generation of fans. 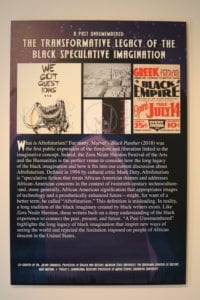 International scholars and academics currently writing about Hurston and topics related to Afrofuturism in dissertations and scholarly publications took part in a two-day Afrofuturism conference at this year’s Festival.

Beginning on January 25, the ten-day celebration also included a celebration of the reopening of the Zora Neale Hurston Museum of Fine Arts, STEAM workshops and educational presentations, a film screening, the book fair, an inaugural “Africa – America Women’s Economic Forum” and the two-day Outdoor Festival of the Arts featuring “The Afrofuturism Pavilion/Writers Space,” exhibitors from the Africa – America Women’s Trade Expo, a vendor’s market and musical concerts on both days.

The World Conference of Mayors continued its collaboration with PEC and the Historic Black Towns and Settlements Alliance, Inc. (HBTSA) by holding its annual gathering in Orlando at the same time. The organization presented Tuskegee Repertory Theatre’s production of the musical Booker T’s Towns, celebrating Eatonville and other early, incorporated-all-black towns. 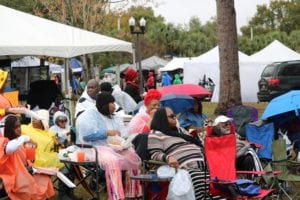 Zora! 2020 Festival attendees out in the rain

“I am humbled, I am impressed, and I say that because this year represents the convergence of many different teams pulling together to produce this event. But it’s passed being just an event,” shared festival director N.Y. Nathiri, who has helmed PEC and the Zora! Festival since its inception.

“It is very clear to me the economic impact that African American cultural heritage tourism has. The data says this, but when you see what we’re seeing here with the Afrofuturism conference, I think that’s what so impressive.”

Hurston herself has recently become front-page news again, with the 2018 publication of Barracoon: The Story of the Last “Black Cargo,” edited by retired USF Professor Deborah G. Plant and based on Hurston’s 1931 interviews with Oluale Kossula — renamed Cudjo Lewis — the last living survivor of the Middle Passage. 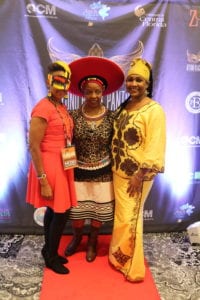 For information on the 2021 Zora! Festival:
The Sound of Afrofuturism, visit zorafestival.org

Read Essence magazine’s “A Beginner’s Guide to Afrofuturism:
7 Titles to Watch and Read”

Explore the origins of Afrofuturism and W.E.B. DuBois

The UK’s Guardian newspaper talks with experts at a 2015 conference on Afrofuturism: Imagining the Future of Black Identity