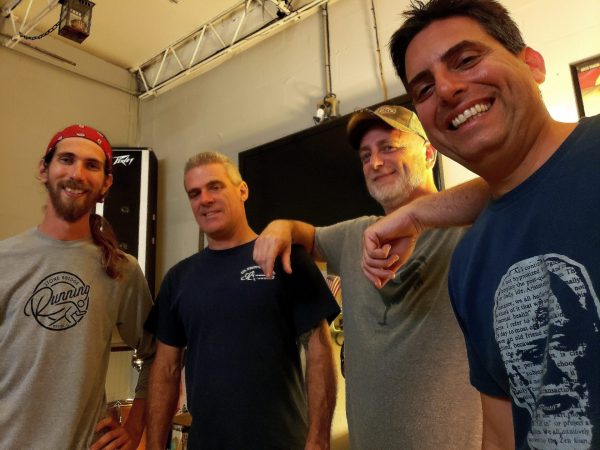 The St. Pete-based instrumental band show us that it’s never too late to play in a band – and find total satisfaction playing live, too.

Joe Bardi, my former coworker and erstwhile managing editor of Creative Loafing, has experienced numerous changes in the past decade: He and wife Heidi became parents to two sons, he left journalism to work at a tech company in downtown St. Pete, and he’s added professional rocker to his skill set.

Bardi and his mates in Zerobabies share a love of experimentation, progressive chord structures and an assortment of genres — from classic Zep-style to surfer rock to prog to funk. The guys have been playing live for a few years and has attracted some plum gigs recently.

Later today, weather permitting, you can catch them at the 4/19 Got A Minute festival at Three Daughters’ Brewing’s newly refurbished outdoor venue, The Side Lot, located on the brewery’s property.

Next month they’ll play a show co-presented by Aestheticized at Corporate Ladder Brewery’s first-year anniversary party on Sat May 25 from 11 a.m. to 11 p.m. 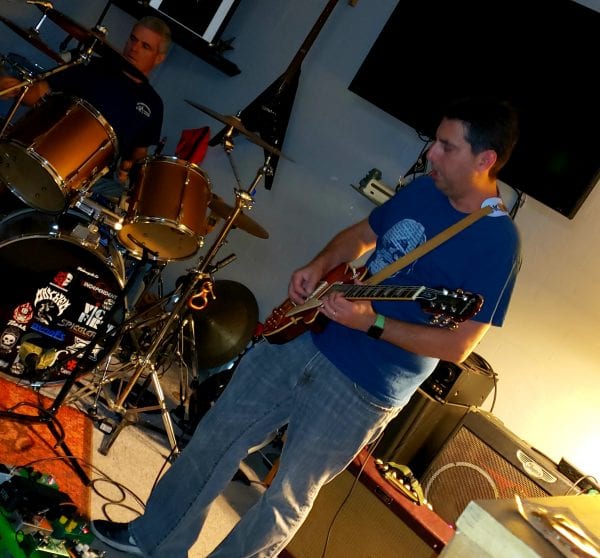 McLaughlin and Bardi at a recent rehearsal.

Creative Pinellas caught up with Bardi for a quick Q&A to get the skinny on his band with some input from Jayson band-wife Kaplan:

Day jobs: Brennan and Pave both work in general contracting/construction. Kaplan is “a frustrated graphic designer” and Bardi is communications director for a tech company. Everyone but Kaplan, who lives and works in Tampa, is St. Pete-based.

Joe, tell us about a scenario that illustrates how you guys come together to write a song? Here’s a good example: our song “Time Traveler,” which is one of our more aggressive tunes. The night before our first gig (we played Bananas for Record Store Day in 2016) we knew we needed one more thing. That song started as a guitar-and-drum exercise with my playing what became the main riff and Brennan coming up with a beat. Once we had that, Mike and Jay quickly figured out strategies for playing over top (Jayson went with a melodic solo over the first half, a wild delay solo over the second; Mike added low-end rhythm and some screeches of his own in the solo portions.) At that point we had the bones, and we played it at RSD and it went well, but then we kept working on it and I’d say it grew and changed for over a year. It’s more set in stone now, but every once in a while “Time Traveler” still breaks out and does something awesome.

Have you ever created through improvisation or do you record parts and put them together?

We do both. Sometimes someone brings something in — I brought in “Skeleton” pretty much complete, Mike did the same with “FC Machine,” Jay with “St. Pete Stomp” — but a song like “Agent Zero” was the result of Jayson and Brennan jamming one night when Mike and I had yet to show up. Other songs definitely come from full-band collaborations, and we record all our practices so that if something cool happens we can try and reverse engineer it. “JoJo’s Alibi Shoppe,” “Rickey Henderson,” and “Space Funk” are all good examples.

So for me, this is easy: Phish and Zeppelin for my bands. Non-music likes: movies, games, my kids. The usual.

Were you friends or did you put an add on Craigslist or recruit through word of mouth?

I had know Jayson for years as “the guy I see at parties all the time.” We would chat and always be like “we should play” and it would never happen. Then one day it did, and we started just goofing off once a week. We also did music for the 48-Hour Film Fest, with our first movie theme becoming one of the first few Zerobabies tunes, “Theme From A Movie.” Jay and I met Brennan and Mike around the time of Jay’s birthday in 2015. They were friends of Jayson’s then-girlfriend, and we all just kind of hit it off at his birthday party (which was an open jam in a living room). After that, we just kept getting together week after week because we all dug playing together so much.

Jayson: Mike understands how music works. I can write what my ears hear, but Mike explains to me why it works. Brennan is a fucking trooper. His instrument requires so much energy than ours and he’s always got a little more juice to keep going. And Joe, Joe is my musical life partner. I’m not saying I couldn’t make music without Joe, I’m just saying I don’t ever want to. 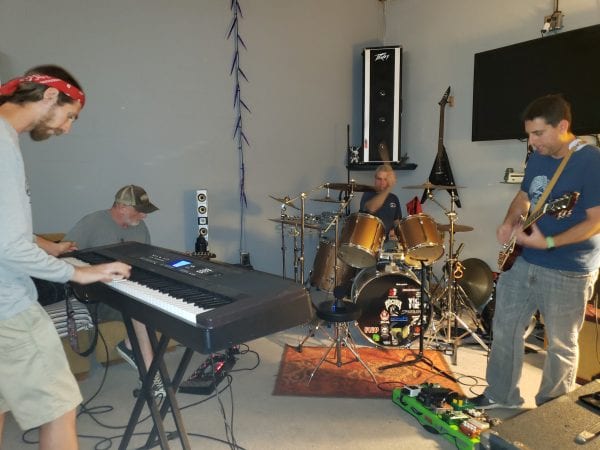 Have you changed or gotten better since forming the band?

Speaking for myself (but I’d guess everyone would agree), I’m a much better player now than when we started. It’s not so much being able to play something now that I couldn’t before, as much as it’s just my general competence has improved. My comfort level was always high, but it’s different when when you’re doing it in front of people. I remember my pick hand trembling at that first Record Store Day, and I had to kind of center myself and calm down to play. That’s all second nature now. I’d also say going from “bedroom guitar” to “bar guitar” is a transition.

Is there something you play now that you didn’t play before?

I’ve changed out every single piece of equipment I use since the band got rolling. Amps, guitars, effects, everything.

What type of guitar do you play?

I used to play a blue Strat, but now it’s a red Epiphone Les Paul.

What’s something impressive about each of your bandmates?

Jayson is our music nerd savant, and the depth of his knowledge is mind-boggling. The guy knows the entire history of recorded music! Mike may be the most laid-back person I’ve ever met. His ability to go with the flow is inspiring, even it it’s almost entirely absent from my nature — which I guess makes it even more impressive to me. As for Brennan, it’s his attention to detail, his big heart, and the way he uses that big heart to guide his decision making process.

EP can be streamed at