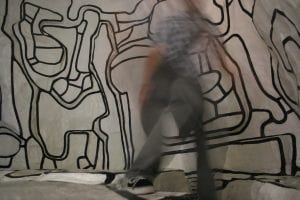 Throughout my now 50+ year career I have been inspired by – and collaborated with – many artists and some musicians.

After I graduated from Harvard and MIT I was invited by I M Pei to join him at his architectural firm. On one project, since I am half French and my native language was French, I M asked if I would go to Paris to help Jean Dubuffet with a sculpture project he was designing for La Defense.

I worked side by side with Dubuffet at his studio drawing the design of the structure  of his sculpture. I actually slept at the studio every night on top of one of the large styrofoam slabs that later used to create the artworks in steel and fiberglass. Dubuffet would take me in the mornings for cafe breakfast and we would enjoy wide ranging discussions then we would go back to the studio to work together.

Of many ways Dubuffet influenced me was that in his art was his creativity and ‘games’ he would play with figure and ground, in ways that would play with your imagination.

Yann Weymouth designed The Dalí Museum,
The James Museum and the Hazel Hough wing of
The Museum of Fine Arts St. Petersburg. You can find out more here.