Already this year, I’ve been asked to speak about Women’s History Month by two different people for two different organizations. It’s weird to me. I realized I was nonbinary at some point last year and haven’t made a point of telling a ton of people. I could care less about my pronouns (I will accept any thrown at me), but I do not want to be called “girl,” “lady,” or a “woman.” It makes approaching Women’s History Month feel different this year.

It’s hard to explain my relationship with my gender. I see myself as all genders and no genders, depending on the day. Was I socialized to be female? Yes. Do I identify with some parts of womanhood? Also, yes. I consider myself a “womxn.” I’m attached to womanhood, but only tangentially. I reject traditional womanhood because it is so often based a man’s idea of what a woman should be. It places most, if not all women, in an uncomfortably tight box. I don’t accept the parts of womanhood that have been created by men. I am not here to satisfy their needs or wants or be what they think I should be. 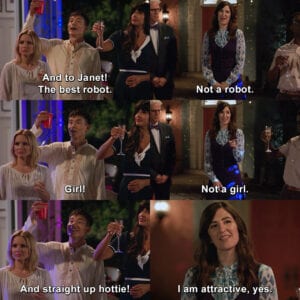 Janet from The Good Place is on my level.

I never realized how much of womanhood was defined by men until I married one. I was twenty years old and still deeply in the closet, believing that in order to live a fulfilling life, I needed to settle down with a man. After marrying, people immediately began asking me when I was going to have children. (I’ve never really wanted to give birth to children.) I was expected to be on my husband’s schedule. (We worked opposite shifts and I liked it that way.) People wanted to know what I was cooking him so he could be comfortable. (I do not cook.) When I went on vacations alone, people thought it was because I was being difficult. (I’ve always preferred traveling alone.)

It was like my entire identity was being erased and redrawn so that every part of me was somehow connected to being a wife. It was only then that I realized the immense stereotypes and expectations we place on women when they marry a man. After coming out, I swore I would never let my identity be defined by someone else again.

At first, I wasn’t totally comfortable with the term “nonbinary.” I am not androgenous, nor do I dress androgynously. I felt like I was taking something that belonged to someone else. But then, I remembered how I felt when I was first coming out. I was hesitant to use the word lesbian, but that’s who I was. Eventually, I adjusted to the word lesbian and now I have adjusted to my own form of nonbinary-ness. 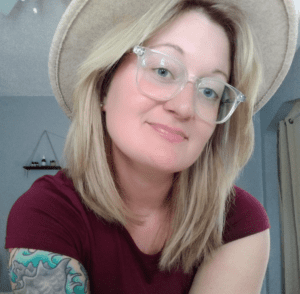 My big learning curve: I don’t owe anyone androgyny as a NB person.

While I am nonbinary, I’m still part of the wlw (women loving women) culture. I’m still a lesbian because lesbianism rejects a lot of those traditional gender norms that make identifying as a woman feel icky to me. In a wlw relationship, men are not centered, and neither are gender norms/roles. I can be soft and strong at the same time. I can have a partner who has a high-powered career and still wants children. We don’t have to worry about who “wears the pants.” In this way, unlearning gender norms is best for everyone – men, women, and nonbinary people. This way, we can be the fullest, truest versions of ourselves.

As much as I’ve grown and learned, I am still unlearning gender norms. Some are so deep rooted; they pop up unexpectedly. Now, I sometimes question my place in women-identified spaces. With Women’s History Month coming up, it’s been an interesting time to re-evaluate my place in the feminist movement and where/how I can best use my voice to help uplift others.