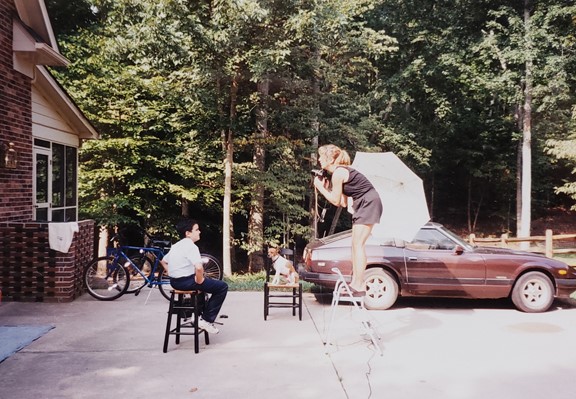 Makeshift studio in Charlotte, NC, where the Innocence Project began. Buster Love sits in a chair because this young model was afraid of dogs.

When I began this body of work in the summer of 1996, I didn’t imagine I would still be consumed by this idea of exploring innocence so many years later. If not for my sketchbook, I would not know the exact day this journey began.

In the beginning, viewers asked if the faces in my artwork were of my children. Recently, I get more questions about my grandchildren. While I feel the same, their reflections tell me otherwise.

Time is such a big problem for me that I had to put a big, old-fashioned clock in the studio so I could keep track of time. While I’m working, I get lost in thought and three hours can pass between glances at the clock. I used to think I could run out of ideas, but now I’m more concerned about time.

I once got out of a parking ticket when I used the excuse, “I’m an artist. I have no concept of time.”

I don’t always use models for my work, but, some of the children in my paintings now have children of their own. They have graduated from college and become helicopter pilots and emergency room doctors and newspaper writers. Meanwhile, after all this time, my perspective is still in the same space, my studio.

I don’t have offspring of my own, but I am happy the children I create go to wonderful homes.