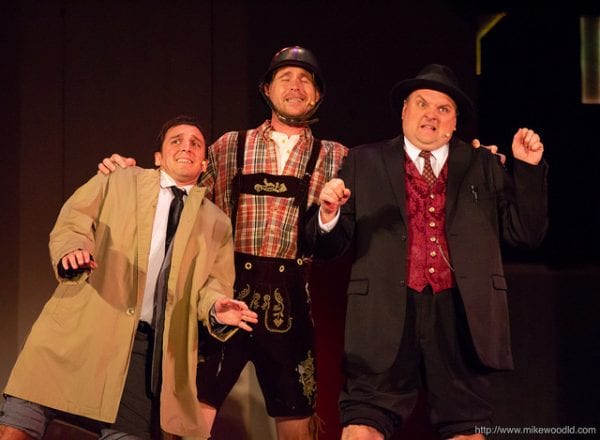 James La Rosa, Jim Sorensen and Matthew McGee get their oompah on in Mel Brooks’ The Producers, a satirical slapstick classic. Photos by Mike Wood.

“Where Did We Go Right?” | The Producers at American Stage in the Park

Variety once called The Producers “a Whoopee Cushion of a musical.” Indeed, this year’s American Stage in the Park production of Mel Brooks’ classic blows some hearty raspberries, and we have the added bonus of St. Pete’s bayfront balmy breezes, rustling palm trees and cooing gulls. It’s a bit of Broadway with a Sunshine State backdrop (Florida Man not included).

The show’s visual pop and full sound (thanks to scenic designer Jerid Fox and sound designer Steven Kraack and other crew members) grab the attention of everyone in the park, from the seats to the outer edges of the lawn, with first-rate vocal performances, spot-on comedic timing and razzle-dazzle dance numbers.

The plot almost mirrors the 1967 film but, of course, as with most musicals, it has a couple of character tweaks and a more upbeat vibe. The leads are the same: Max Bialystock (Matthew McGee), a sleazy theater producer who fleeces and seduces old ladies to fund his Broadway flops, meets a neurotic and shy accountant named Leopold Bloom (James La Rosa — and. yes, Brooks named him after the James Joyce’s Ulysses central character). The usually-honest accountant inadvertently gives Max the idea to produce a play that is guaranteed to fail, sell more than 1,000 percent in investments and then make off with the loot. 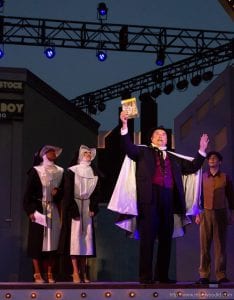 McGee in the play’s opening number.

First, they find the worst imaginable play to accomplish their scam: the duo digs up a script that pays homage to, of all things, the Third Reich. Its pigeon-keeping Nazi playwright, Franz Liebkind (a feisty Jim Sorensen), submitted a long-buried script titled Springtime for Hitler. Then Max goes after the worst director he knows — a strutting peacock of stereotypical swish — Roger De Bris (a scene-stealing Scott Daniel) emerges in a ballgown and headdress that makes him look like the Chrysler Building. Roger’s entourage — including Emmanuel Carrero as Kute Kevin; Charles Logan, a flamboyant choreographer who exits the stage with a pliée and Alex Ringler, who’s simply perfect as snooty assistant Carmen Ghia–get some of the show’s biggest laughs.

If all the above Nazi humor and swishy gayness weren’t envelope-pushing enough, we get another full-blown stereotype, a blonde Swedish love interest with a mile-long name, Ulla Inga Hansen Benson Yansen Tallen Hallen Svaden Swanson Bloom — well-played by Gretchen Bieber.

Over-the-top politically incorrect comedy to be sure, The Producers comes across as both a bold and crowd-pleasing choice — a rare twofer, and director Rye Mullis deftly corrals his cast and crew, providing the right snap, crackle, pop to make it work just right.

For this reviewer, McGee is a great choice for the lead. His eye rolls and deadpan reactions recall perennial Brooks-film star Harvey Korman more than Mostel — not a bad thing at all.

There’s a spontaneous exuberance to Brooks’ humor that translates exquisitely to the musical form, and American Stage’s crew, with their clever marquees of Broadway parodies such as Katz, South Passaic and Maim,  showcases the production superbly. They also knew how to deal with minor weather impingements during our viewing last week. McGee and cast didn’t flinch except for a couple of ad-libbed one-liners. Some of the audience members kvetched when it rained for a few minutes, and their smart-aleck complaints sounded like a scripted part of the show.

After enjoying the production, I asked Stephanie Gularte, American Stage’s Producing Artistic Director, why she chose Mullis to direct.

“Rye reached out to me a couple of years ago to express his interest in directing for American Stage in the Park, so he’s been on my radar for a while,” she explained. “Since then, a number of trusted colleagues have recommended him to me and eventually, I got the chance to speak with him and discuss his directing style and experience. For the park, it is really important that we have a director with a strong grasp of spectacle and who can confidently stage a large scale production in a very short amount of time. Rye struck me as the right person to take this project on, he was passionate about the opportunity and enthusiastic about working collaboratively with our creative team.”

And why a show as crass as The Producers during a time when cultural insensitivity has caused more and more societal problems?

Gularte’s answer was thoughtful and nuanced. She prefaced that American Stage in the Park is a different animal than AS’s mainstage programming. The park productions are a tremendous financial investment for the company, they are performed in a unique venue and they have the highest profile of all of their shows. So when she’s selecting a title, she’s considering each of these factors, which ultimately leads her to choose well-known titles with something of a built-in audience that allow them to “be big and broad” in their staging as best befits the Demens Landing performance space and that, hopefully, will get audiences talking throughout the community.

“Mel Brooks’s The Producers wasn’t an obvious choice for me at first,” she admitted. “But I was looking to produce a comedy with a bite.  Something that would give us permission to laugh but not let us off the hook, so-to-speak. Satire is meant to entertain with humor while communicating social criticism.  For Mel Brooks, this style allowed him to expose and discredit societies’ vices and corruption.”

But it wasn’t an easy choice.

“I’ll be honest, when I picked this production (around December 2017), while the themes were topical, I could not have predicted what would occur in our country over the subsequent 16 months.  Would I have selected this production after the white-nationalist protests in Charlottesville or after the Harvey Weinstein revelations that led to the #metoo movement?  I don’t know that I would have.  And I have wrestled with the question of whether we should be presenting this production at a time when, as a nation, we are once again wrestling with these very troubling issues in a very acute way. Ultimately, we’ve chosen to move forward with The Producers with a very talented and dedicated group of artists in the hope that our work will indeed give people permission to laugh at our human foibles while at the same time offering a few uneasy moments that remind us of who we don’t want to be.”

Her thoughts mirror those of the show’s mastermind:

“You get up on a soapbox and you argue with a Nazi, you’re going to lose. But if you can ridicule him and make people laugh, then you win. It’s as simple as that…by using the medium of comedy, we can try to rob Hitler of his posthumous power and myths. In doing so, we should remember that Hitler did have some talents. He was able to fool an entire population into letting him be their leader.” –Mel Brooks

The Producers starts at 8 p.m. (park opens 6 p.m.), Wednesday through Sunday at Demens Landing Park, First Avenue Southeast and Bayshore Drive, St. Petersburg. $18 and up. 727-823-7529. americanstage.org. Coolers allowed if you want to bring a picnic; alcoholic beverages are not. Food, beer, wine and sodas will be sold at Demens Landing Park. If you don’t get a reserved seated ticket, make sure to bring your own folding chair or blanket to get the best possible view of the stage.