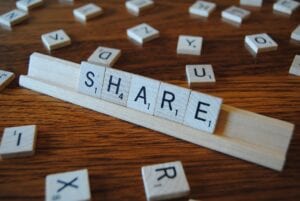 This week’s blog is for those of you who have been writing or otherwise creating privately, but you have not yet shared your work. Your creation is sitting in a drawer, the ink pressed neatly into the closed pages of a journal, or waiting in a folder on your computer. Safe from critical eyes.

A challenge for your weekend: share it with someone.

If you are thinking something like “Are you crazy? People will trash it!” or “You said this was supposed to be fun! I’m never reading your blog again!”—then I’m talking to you.

Because if we’re creating, aren’t we meant to share it, to get a little bit vulnerable connecting to someone via what we create? If that’s arguable, pick something with the potential to not be “just for you,” something that, if you let it, just might make the leap beyond you.

If you’re new to this and the thought terrifies you, don’t run straight to a critique group. Find someone you trust.

Be a little careful there, as not everyone knows how to respond in helpful ways. I didn’t always know to anticipate this. Years ago, I shared an essay with my boyfriend, hoping to publish it. It was a vulnerable moment for me, but I didn’t mention that.

That was the extent of his feedback. I was crushed and put it away (Clearly if someone’s reaction was that flat, it couldn’t be any good, right? Wrong.) A few years later, I picked it up again, still liked it, and decided to submit it anyway.1 Newsweek published it. Ha. Stupid boyfriend. Ok in retrospect, it may also have helped if I’d been clear about the feedback I wanted, or if I’d shared that I was feeling vulnerable about it. But regardless, I should have ignored him and trusted myself more.

This doesn’t mean to disregard any feedback you get. Only that it may take time and direction from you to get helpful feedback. You’ll grow your own discernment to know what feedback to use and what to ignore. But to build those skills, you have to take that first scary step of sharing the work with someone.

If you’re further along, if you use constructive feedback regularly and revise until you can barely see the piece anymore, yet you’re still on hold in sending out your work, why not submit somewhere this weekend?

“But what if it’s (I’m) not finished?” you may argue. “Worse, what if I make some glaring mistake everyone sees but me because I don’t know enough yet?”

Nobody knows enough yet. And is any creative piece of work ever “finished?” At some point you will look back later on earlier work and see that you were wrong about something or would do it differently now. Because if that never happens, if your work is exactly the same as it was fifteen years ago, have you grown?

I can’t count the number of times I’ve put my work out there only to see errors or glaring omissions later. You get used to it. (Mostly. Ok no you don’t and it’s always annoying. But you learn to live with it.)

So if those are your worries, congratulations, you’re an unfinished human! And unfinished humans are too complex, sublime, and terrible not to each be grossly ignorant about any number of things. Don’t let that stop you.

But what if nobody likes it?? What if everybody hates it!?

Ok now that’s just whining. Not to crush your dreams, but most people will be indifferent to your work. Those who have been submitting for even a little while may roll their eyes at this (“Thanks for the reminder mean lady. Meet my pile of rejection letters.”) If it helps, consider that numerically speaking, most people are indifferent to bestsellers too.

So counterintuitive as it sounds, if you’re doing the work to learn and improve, you can’t take others’ indifference personally—even if your art feels intensely personal to you. It’s just part of the deal in a time-crunch culture in which it isn’t easy for anyone to find their particular audience, and even that audience is pretty busy.2

Who decides what is “good” anyway?

The conversation about gatekeepers and monetary vs. intrinsic value of creative work is too long for one blog. But I once read an interview with a cynical literary agent who claimed that the size of the advance a book gets is inversely proportional to the quality of the writing; or the more successful/popular something is, the worse the writing is. You may laugh (or cry) if you see a grain of truth in that, but I’ll throw in a grain of salt too. I can easily think of highly successful writers who are experts at craft. And as far as I’m concerned, life’s just too hard to trash others’ creative efforts as lesser, “banal”, “popular”, “sentimental” or whatever the approved critical vernacular may be (funny how cliché the jargon used to decry cliché can be).3

While I tend to gravitate toward more “serious” topics and literature, I have also logged good time on some seriously formulaic cheese and sentimental stories pumping metaphorical sugar into my bloodstream. I am currently watching a series that is so full of plot holes and inconsistencies that it’s probably fair to say it is insulting to intelligence itself. But still, I like it. I appreciate the people who created it, as I suspect I will always appreciate those who make things that lighten the load for others. Sometimes our psyches need to put down the boulder sized tomes we’re carrying around inside them.

So for this exercise (sharing your work), who decides what’s good? You do.

Might there be comfort in the fact that not everyone will like what you create? Some people lean toward plot-driven fiction, some character-driven. Some like writing thick with imagery, others say, “Get to the point!” So it’s not necessarily a bad thing if your work falls flat somewhere. In fact, what a relief it is that someone won’t like your work, as it is testament to the fact that we are not identical cogs creating boring sameness. This is not to dismiss how challenging it can be to publish if that’s what you want. I know it can be a tiring uphill climb.

But there are many venues for different types of work, which is why writers are advised to read the journal before submitting to it. If the writing style is nothing like yours, move along to the next possibility.

So if you’re thinking you have to wait until you can appeal to a wide audience (twisting your work into an inauthentic pretzel while you’re at it), you’re wasting precious time and energy meant to fuel your dreams. Yes, take care with your words. But write/create you, revise, then find out where it fits. I’m not saying it’s easy, but don’t let that stop you. If you have a light and entertaining story, screenplay, or whatever, get to it! If you have something more thinky you’ve been tinkering with, give it one last look this weekend, and share it with a breathing being (who is not your dog or cat). Maybe one person, maybe with a wider audience, whatever pushes you past what’s comfortable.

Cliché as it may be, life is too short to worry about how perfectly your creation must land on its feet. Just let it land.