USFSP Brings the Arts on Campus

and Invites Our Community to Free Public Performances 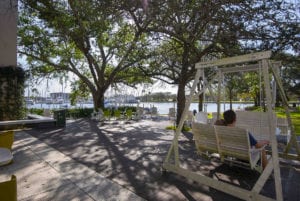 Ever wanted your daily environment to erupt into a theatre production? That dream is around the corner at USF St. Pete.

Come out for six free theatrical experiences, each under one hour — March 9-11 during Short & Sweet Theatre Week at USF St. Pete.

Because the St. Pete campus doesn’t have a theatre department — or a theatre — Ann Wykell, Coordinator of Places Spaces and Arts at USFSP, has been creatively programming to side-step having no set stage. She reached out to theatre professionals in St. Pete and Tampa, teamed up with a food bank, and is using The Edge (the scenic Bayfront side of Heller Hall), the Deck outside Poynter Library and The Grind Coffee Cafe. All are on the downtown waterfront campus.

While USFSP Theatre Week is free, donations will be accepted and greatly appreciated to help the USFSP Support-A-Bull Market, an on-campus food bank, purchase a refrigerator. This will help provide fresh food and produce for food-insecure members of the campus community. (Find out more about this challenge for students coping with the costs of higher education here.)

Especially interesting is Chew On This, a series of smaller pieces directed by Lisa Tricomi — the whole thing takes place in a real coffee shop at The Grind Coffee Cafe.

When you first walk into the cafe, she says, you can’t tell the difference between regular customers and actors!

“You aren’t going to be able to tell because it’s not going to be presented in a regular theatre way,” Tricomi explains. “It’s more of an immersive theatre experience. Tuesday, March 10 at 6:30 p.m. and Wednesday, March 11 at 5:30.

To fit the space, she has even included a short play called Barista Love, written by Jim Rayfield.

Rayfield said Barista Love was half-inspired by latte art, which he finds fascinating. It’s a love story in which a barista is taken with a young man who comes in and says his heart is hard and cold. The playwright himself used to joke with baristas, when they offered to warm up his pastry, that he preferred it cold and hard, like his heart.

“Her goal is to bring warmth to his heart,” Rayfield says. “And in the course of that, she encounters the kind of people who come and go in a coffeeshop. The people who are constantly changing their order.

“I did sort of listen to some people ordering in coffeeshops. They’re so wonderful, they have these elaborate recipes all down. Almond milk, extra shot, they just go on and on with their specifications. Her goal is to attract him and engage him and get him to smile, get him to talk to her. She uses her coffee to do that.” 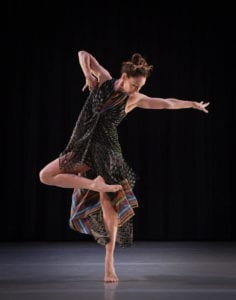 A class from USF Tampa is coming to St. Pete to perform an environmental piece on the Edge, where you’ll also find Shakespeare from American Stage, an improv performance and workshop with Hawk and Wayne and short plays by Matt Cowley, St. Pete’s “master of the absurd.”

Now back to The Grind with Tricomi’s Chew On This. “I really like working with real people and real stories,” she said. “We got with Janet Keeler who is a teacher at USFSP in journalism — and she’s also a food journalist.

“We asked if she had any students who’d be interested in going out and interviewing people on the subject of food. It could be anything, just that it was about their emotional relationship to food. Three students volunteered to do that. They went out and found other students on campus, they each interviewed two people, and from those I’ve selected three that turned into theatrical pieces and those will be performed.”