A Tribute to Marian Anderson 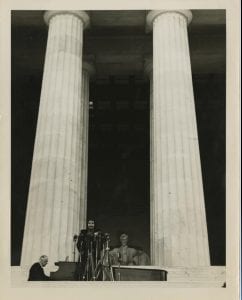 When the Daughters of the American Revolution prohibited Anderson from singing at Constitution Hall in 1939, U.S. Secretary of the Interior Harold Ickes organized and emcee’d the African American contralto’s legendary concert at the Lincoln Memorial on Easter Sunday.

Four years later, the D.A.R invited Marian Anderson to perform in Constitution Hall. The concert was held on January 6, 1943, on Epiphany – without their usual segregated seating.

We’re honored to share this selection from Ray Arsenault’s beautiful biography, The Sound of Freedom: Marian Anderson, the Lincoln Memorial, and the Concert that Awakened America. . .

In his introduction to the Constitution Hall performance, Ickes said that for people “of goodwill and tolerance these are indeed difficult and heart-trying times. . .  We are in a period in which it appears that the enlightenment of the human spirit that has been developed through generations of painful toil toward a civilized way of life has been subjugated completely to brutal selfishness. A period where the forces of brutality stir up currents and eddies of intolerance. 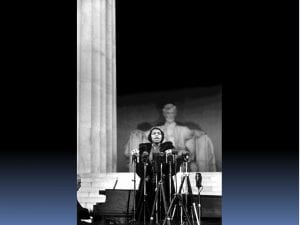 “But, turning to the subject of the hour, he assured the gathering that all was not lost: ‘While grave doubts are natural and moments of discouragement are not uncommon, a calm appraisal shows abundant manifestations of the inherent desire of man to live peacefully and humanely. This meeting. . .  is but one expression of this humane spirit.

“At times when we may have grave doubts, it is heartwarming to recall the sincere expression of tolerance which typified the concert at the Lincoln Memorial four years ago. All who were present on that occasion could not help but be impressed with the dignity of the human spirit. At that time instead of giving mere lip service to our democratic ideals we gave active allegiance to the greatest of all those ideals — tolerance.

“Intolerance in any form we must hate and fight — for it is the evil cancer which seeks to destroy our spiritual and moral being.’” 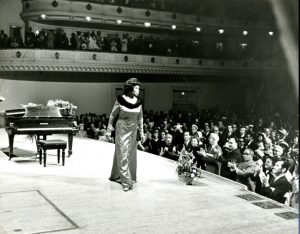 Marian Anderson rose and told the audience, “That Easter Sunday concert was more than a concert for me. It was a dedication.

“When I stood on the steps of the Lincoln Memorial with the statue of President Lincoln at my back and seventy-five thousand of my fellow countrymen before me, it seemed that everyone present was a living witness to the ideals of freedom for which President Lincoln died. When I sang that day, I was singing to the entire nation. I have carried the inspiration of that Easter Sunday with me ever since.”

Then Anderson sang “Let Us Break Bread Together” followed by two other spirituals, winding up with “The Star-Spangled Banner.”
. . .

You can read the full account of this momentous performance
in The Sound of Freedom: Marian Anderson, the Lincoln Memorial,
and the Concert That Awakened America, by Ray Arsenault.
A PBS special based on Arsenault’s book is currently in production.
Book details here.

Ray Arsenault is the John Hope Franklin Professor
of Southern History at the University of South Florida St. Petersburg.
He’ll be speaking on Saturday morning at 10 a.m. at the
Times Festival of Reading about his latest book, Arthur Ashe: A Life.

You can listen to a podcast where Ray Arsenault
talks about Marian Anderson’s groundbreaking concert
here, produced by the National Endowment for the Arts.