. . .
“We apologize to Alice for all the words, but promise plenty of pictures.”
— Charles Brown in his introduction to the Florida Bibliophile Society’s virtual book tour 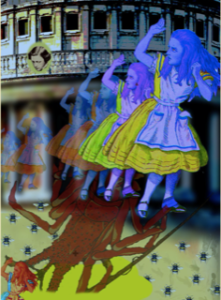 Alice (of Wonderland fame) on an imaginary tour of the Dalí Museum reimagines Dalí’s The Hallucinogenic Toreador in this artwork created by Florida Bibliophile Society president Charles Brown. Brown has imagined Alice at the museum for FBS virtual tour of local book-related sites.

Book lovers are no strangers to trips down the rabbit hole, but a virtual tour of book sites in this area — offered free by the Florida Bibliophile Society (FBS) — would make even Lewis Carroll take notice.

Alice (of Wonderland fame) herself has signed up for the tour.

And if that isn’t surreal enough, the FBS online trip — dubbed Alice in the Land of Sunshine, or By Way of Introduction to a Wonderland That Might Have Been — is based on a three-day tour that never took place.

The tour originally had been planned by then-president Jerry Morris and his fellow bibliophiles for members of the Fellowship of American Bibliophilic Societies (FABS) who were scheduled to come to St. Petersburg last April for the annual Antiquarian Book Fair held in St. Petersburg’s Coliseum.

Alas, not enough members signed up so the FBS shelved the trip but, as it turned out, when COVID struck, the Antiquarian Book Fair itself had to be cancelled for the first time in its nearly 40 year history.

So what to do with an amazing bibliophile tour that might have been? This fall, Morris and his team created a virtual version of their abandoned tour, recreating book-related stops in Sarasota, St. Petersburg and Tampa.

They gathered information about the sites they had planned to visit and divided the online tour into four installments, richly illustrating each with plenty of photographs. The first installment was posted in the society’s September newsletter, the second in the October newsletter. Two more are scheduled for the November and December newsletters. Unlike most other bibliophile societies whose newsletters are for members only, FBS makes its newsletters available to all.

And Alice? The appearance of Alice is thanks to Charles Brown, the current FBS president, who has penned four essays before each fact-filled installment, imagining how Alice would have reacted to the FABS tour. 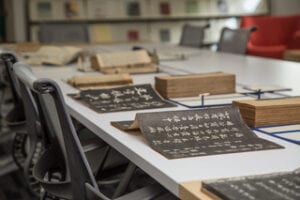 Day 1 of the Florida Bibliophile Society’s virtual tour, which focuses on book-related sites in Sarasota, includes a stop at the Elling Eide Center for Research, a private library that houses the largest collection of Asian material in the Southeast.

He describes, for example, Alice going to the Dalí Museum in St. Petersburg on Day Two of the tour.  Approaching the museum, the precocious girl sees something “monstrous with blue diamond-shaped scales like a dragon’s” sprawled over the “big white, squarish building.” The museum is “quite near the water,” Alice notes. Had “this blue monster crawled out of the bay to attack the building, or was it escaping from the building and headed back to the water? She couldn’t quite decide if she was confronting a paradox or an enigma.”

Once in the galleries, Alice recreates in her mind’s eye her own version of Dalí’s phantasmagoric painting The Hallucinogenic Toreador, replacing Dalí’s multiple Venus de Milos with multiple Alices and substituting Dalí’s flies with friendlier bees. Capturing perfectly the voice and spirit of the indomitable Alice, Brown even provides an illustration of the artwork his imaginary Alice imagines.

Brown’s knowledge of Alice is on display in these delightful essays so it isn’t surprising to learn that he is an avid collector of Alice in Wonderland books. He says he may have as many as 80 copies of the Lewis Carroll classic.

“I’ve never really counted them,” laughs Brown when I reached him by telephone in Gainesville. Brown is a technical editor at the University of Florida Transportation Institute’s Technology Transfer Center, a title that surely would have confounded Alice. Brown was named president of FBS in September, taking over from Morris who is now vice president of the group.

Brown’s first essay begins with the heading “Where It Usually Begins.” Alice is sitting under a chestnut tree on a “warmish, peaceful, drowsy day in Oxford,” surrounded by her schoolbooks. When Alice (who is not overly fond of Words, Brown reminds us) finds a map in her geography book — “Of her many school subjects, Alice preferred geography because she had observed that geography books could be guaranteed to contain pictures” —  she discovers a place called “Florida,” just six inches away from England. 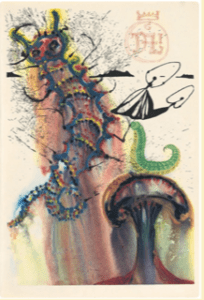 Day Two of the Florida Bibliophile Society’s virtual tour tells the history of the Dalí Museum and takes a look at some books illustrated by the Catalan painter, including a limited edition of Alice in Wonderland published in 1969. Advice from a Caterpillar, shown here, is one of twelve mixed media illustrations included in the rare volume.

“She realized that this is not very far, in fact logically, if something is only six inches away, one must already be there and as her favorite maths professor had taught her: you cannot fight logic,” writes Brown. And as “logic” has it, it just takes the buzzing sound of bees to transport Alice to a place called the Hotel Indigo where a group is about to take a book-related tour.

Day 1 focuses on Sarasota. The itinerary includes the Ringling Museum of Art (and its Art Library based on John Ringling’s personal collection)  A. Parker’s Books on Main Street, the Selby Public Library and the Elling Eide Center, a private library of Chinese literature and art (the largest collection of Asian studies materials in the Southeast).

Day 2 of the tour focuses on sites in St. Petersburg, including that memorable tour of the Dalí Museum with Alice and her active imagination. In the fact-filled section that follows, the FBS provides a history of the museum and lists the books Dalí wrote and illustrated, including… Alice’s Adventures in Wonderland.

Parts III and IV,  scheduled to appear in the FBS’s November and December newsletters, will cover the final leg in Tampa of the tour “That Might Have Been,”

The Florida Bibliophile Society, described on its website as “A Congenial Organization of Book Lovers, Collectors, Readers, Buyers, Sellers and Assorted Eccentrics,” was launched in 1983. The society currently has around 50 members. Book dealer and collector Lee Harrer, one of the founding members of the society, also helped Michael Slicker, proprietor of Lighthouse Books, run the Florida Antiquarian Book Fair, so the two have always been closely linked.

“The society was founded before the Internet,” Brown points out, “when personal contact between dealers was essential. The Antiquarian Book Fair brought all these people together.” 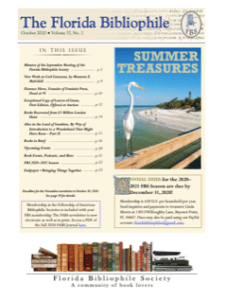 The Florida Bibliophile Society posts its monthly newsletters online for public viewing. Check out the first two installments of its book-related tour of Tampa Bay in its September and October issues here. Check back for the November and December installments.

The pandemic has forced the FBS apart for the moment. Members currently meet online through Zoom, but that, says Brown, has had its upsides.

“In October, we were able to have a speaker from Canada,” says Brown, referring to Nigel Beale who spoke on How to Talk to Bibliophiles. Beale has interviewed more than 400 novelists, publishers, booksellers, poets and critics on his popular Biblio File podcast. “We also had a guest president at that virtual event — Jackie Vossler from the Caxton Club (the bibliophilic society founded in Chicago in 1895).”

The FBS is an eclectic group. Members are printers, designers, writers, published authors of fiction and non-fiction, scholars and non-scholars who care about books. Morris, who has a personal library of more than 4,000 titles (including 1,400 that are books about books) is especially interested in Samuel Johnson and his biographer James Boswell. In addition to his interest in Lewis Carroll, Brown collects books on Soviet avant-garde art, typography and World War I (he also is obsessed with anything in German).

“It’s nice to meet with people who also collect,” says Brown, who points out that not everyone has a spouse who understands an addiction to books. Morris says his wife Linda, now the treasurer of FBS, used to call the group “owners of moldy oldies.” People join the group to discuss what to do with their collection when they die, to learn about the book arts or just to talk about books.

“It is a very spirited group of people. It can get technical at times, but there’s always someone there to answer questions,” says Brown. “Join a session and see what you think.”

WHEN: The Florida Bibliophile Society meets at 1:30 p.m. on the third Sunday of each month from September to May.

WHERE: Due to COVID, the FBS currently meets virtually through Zoom.

In the past when in-person gatherings were possible, the meetings alternated monthly between Pinellas and Hillsborough counties, usually at the Seminole Community Library in Seminole or the MacDonald-Kelce Library on the University of Tampa campus.

WHY JOIN: The group offers guest speakers, book auctions, holiday parties and an annual banquet. Members receive the annual FBS Newsletter and membership in The Fellowship of American Bibliophilic Societies (FABS) whose semi-annual publication, The FABS Newsletter, includes listings of bibliophilic activities in the U.S.

Annual Dues: $50 per household for Tampa Bay residents (you are free to donate more). Society members who do not reside in the Tampa Bay area: $40 a year. Dues for the 2020-2021 FBS season are due December 31.

In 2016, Lasner donated the collection of over 9,000 books and works of art, valued at over $10 million, to the University of Delaware Library – the largest gift in the history of the library.