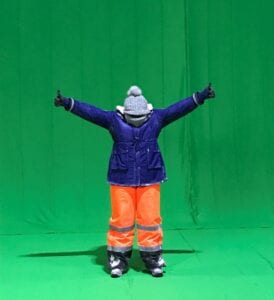 Theatre has not been the same since Covid-19 knocked (not so kindly) on our doorsteps last March. It’s been almost a year since the world locked down in an attempt to limit the spread of Co. With occupying small, enclosed spaces for long periods of time being a big “no-no” in regards to Covid-19 regulations and safety measures, many theatres and troupes have had to find ways to adapt using what limited technology there is.

Thus creating “Zoom Theatre” – not quite theater, not quite film. There are not many plays that can translate very well to a livestream, and this makes it hard to determine what exactly to produce to keep the art of theatre alive.

This event was written specifically for the Zoom/streaming format, under very strict Covid-19 safety guidelines. All the actors and crew  have rehearsed remotely – and will be performing the show remotely (with the exception of some pre-recorded clips for visual effects, which were all filmed socially distanced and masked). This is no small feat. 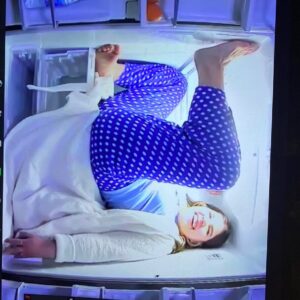 Magnetic North incorporates storylines from three different timelines that weave in and out of each other like a dance. Set in the Greenlandic Arctic in 1909, 1976 and 2021, the show explores isolation, dreams, loss, shattered realities and the impact of human actions on the environment.

While not a show about the pandemic, it certainly is timely, and comments on topics many people are dealing with because of it.

The story begins in 2021, and invites you to  “gather with us on Zoom to celebrate the life and times of Josie Aguirre – activist, journalist and lover of the Arctic wilderness. We’ll be sharing extracts from the 1909 diaries of Matthew A. Henson, a polar explorer and one of Josie’s heroes, meeting her friends and sharing stories from her 1976 trip to Greenland.”

Helen Tennison, the director of Magnetic North, also directed USF Theatre’s last full-scale in-person production Orlando, a devised adaption of the novel by Virginia Woolf, last February. Before that, The Crucible by Arthur Miller in the spring of 2018.

When asked why she wanted to write a completely digital performance she explains, “Every crisis is an opportunity! Being forced into a new creative practice opens the door to creative ideas that would never otherwise have occurred.

“Zoom performance is its own form, not theatre or film. It’s been exciting to begin the process of discovering what that form        might be.” 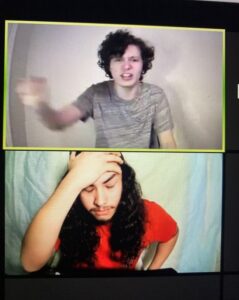 The process of discovering “Zoom performance” has been an adjustment to say the least. Because of the tricky regulations, all rehearsals and performances have occurred in individual, separate locations. “It’s been a completely different dynamic to working in person, yet I feel just as connected with the cast online as I do when I was at a live theatre rehearsal,” says actor Bennet Pruess.

The entire production team and ensemble have been remotely preparing and rehearsing for months, with the Brits staying up till 2-3 am UK time to attend the US rehearsal schedule. Instead of exploring the theatre space, actors are now required to explore their individual performance spaces and set-ups – their rooms at home. Each actor becomes their own cinematographer, designer, editor, technician and stage manager, to an extent.

“The students at USF have impressed me with their creative invention and ability to adapt to the new working conditions – they have been imaginative, flexible, generous and dedicated,” says Tennison.

Once the limits of the space and camera were discovered, then began the process of finding the right messages to translate across the medium. As it’s a visual medium, many sequences are movement–based and devised by the actors based on a theme or emotion.

Having been a part of the BRIT productions the last three years, this production has definitely been one of the more challenging. However, it has been one of the most inspiring, watching the actors  connect with each other across miles of land and sea.
. . . 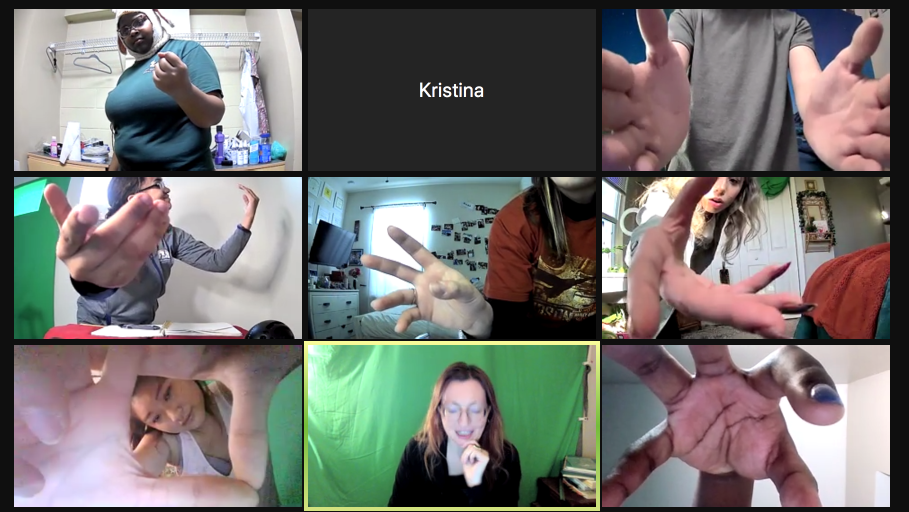 . . .
This process is not something we would have dreamed about before the pandemic. The nature of this show also means that it’s not limited to those in the Tampa Bay area – the audience will be a global audience, tuning in when  they can, despite the miles and time difference.

“One of my biggest takeaways is that Helen, Matt and Eva are an extremely innovative and adaptable team. They brought theatre to Zoom rather than force Zoom to go to theatre,” says Sydney Reddish, who plays Laurie Sorenson, part of the 1976 cast. “It’s been a very enlightening experience that has allowed all of those involved to experiment and play in a new world and way of creating.”

This project was created through TheatreUSF’s British International Theatre (BRIT) Program. The BRIT program has been bringing a wide range of outstanding guest artists from the UK to work side by side with TheatreUSF students for more than 25 years.
. . .

. . .
The annual BRIT production usually takes place in the spring semester, and has an additional class component that is usually reserved for workshops, improvs and character work exercises that expand on the work done in rehearsal. This class gives students opportunities to learn other theories and practices that are  more prevalent in the international theatre scene, such as devised theatre. 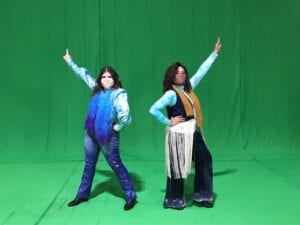 Devised theatre – also called collective creation – is a method of theatre-making in which the script or performance originates from collaborative, often improvisatory work by a performing ensemble. That is to say, the work is created as a whole by the cast and crew members. Switch any one person out,   and the show would be completely different.

If you’ve been feeling isolated, lonely, or questioning how theatre and art can still survive in a world-gone-digital, you can explore Magnetic North this weekend or next.

While the world feels tumultuous and distant, we can still connect together virtually and create experiences that make us feel a little more whole.

Kristina Kourkoulos serves as the
Assistant Director on this production
. . . 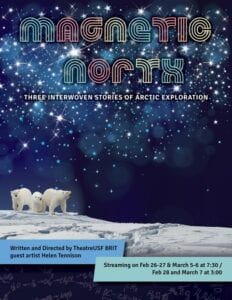 This virtual event is free but reservations are required.
You can RSVP here.

Notes
There is no late seating,
please join the Zoom prior to the start-time.
Please bring a candle (and a way to light it) to close the event.

The performance is best experienced individually,
while wearing headphones.
. . .
Find out more about the University of South Florida
School of Theatre and Dance here