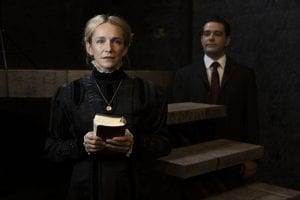 Emily Dupre and Eric Davis in freeFall’s Turn of the Screw. Photo by Thee Photo Ninja.

The Florida sun may still be oppressively bright this autumn, but freeFall Theatre invites us into a darker, chillier corner of our imagination by way of the vintage ghost story, Turn of the Screw. Jeffrey Hatcher’s minimalistic take on a Henry James horror story provides theatergoers with an engaging, psychologically-twisted experience that’s sure to get you in the Halloween spirit.

Hatcher’s 1996 adaptation reimagines James’s novella for two actors and one set, and freeFall’s cast features Emilee Dupré (Cabaret at freeFall, Broadway’s Chaplin) and freeFall Artistic Director Eric Davis (The Tempest: Esta Isla Es Mía at freeFall), who give natural, dynamic performances with a touch of the campy hyperbole of the genre. That said, they’re not so corny that we’re distracted from the suspense. 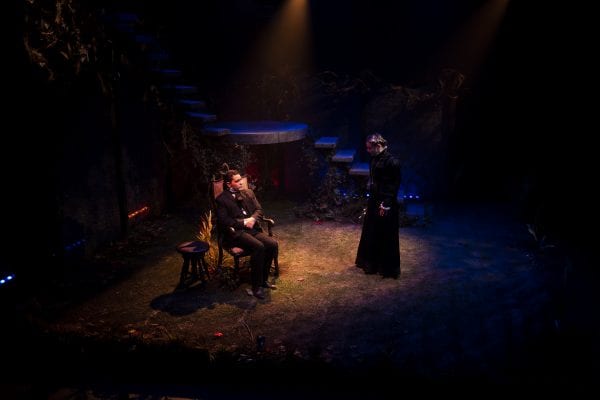 Dupré plays The Governess, and Davis portrays all of the other roles in the Gothic thriller. According to the New York Times, James wrote it hoping for a hit and he includes several of the gothic tropes that were popular in his day. We meet Davis in the first scene as a wealthy, eccentric Londoner who hires a naïve young woman (Dupré) to care for the orphaned niece and nephew in his charge that he has no interest in raising. Flora and Miles live at Bly, their guardian’s remote country estate. The employer instructs his new governess not to contact him about for any advice no matter how dire the situation — a campy, obvious bit of foreshadowing.

Davis returns in the following scene as the housekeeper, Mrs. Grose (amusingly and convincingly so). She warns the governess to lock her door at night, and mentions the tragedy that led to Flora losing her ability to speak, a departure from other versions of the story, including the critically praised 1961 film The Innocents starring Deborah Kerr. Flora, traumatized into aphasia, can remain invisible to the audience, along with the reported apparitions of the late valet, Peter Quint, and the late governess, Miss Jessel. The story becomes tauntingly ambiguous. We question what we see and hear and wonder what’s actually happening in front of us until the play’s crushing climax. 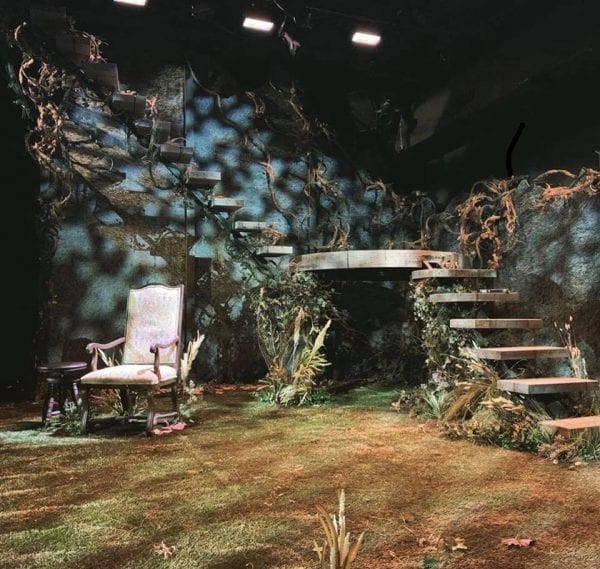 Directed by Theatre Tampa Bay Best Director nominee (Buyer & Cellar), Timothy Saunders, The Turn of the Screw lures us in through  pitch-perfect performances by Davis and Dupré. Davis goes from playing an eccentric millionaire to a jovial nanny and disturbed young man with fascinating precision and ease. Dupré transcends the superficial stereotype of ingenue to portray a woman who’s dynamic, individualistic and somewhat disturbed.

What’s more, Hatcher’s script adds an intriguing reference to dyslexia that makes the story less dated in its psychology. While 19th century literature often relies on an obsolete binary of madness vs. sanity, this updated take on an old-fashioned ghost story gives us more detailed shades of mental illness. To this end Dupré shows us how traumatic events can alter perceptions… or vice versa. Either could be true, and she’s convincing in either case.

Tom Hansen’s set design is both eerily beautiful and fascinatingly ambiguous, too. We see a home with vines and plants taking over the staircase and dead grass replacing  the floor, imparting an unsettling question of time and place. There’s also actual pond — not only because freeFall has historically wowed us with ingenious ways to include water on their sets — but water also symbolizes transcendence and mystery, intangible conditions that become as disturbing as the specters themselves in Turn of the Screw.
Turn of the Screw runs through October 27.
A talkback with the director and cast takes place after
the Friday night performance on October 25. Director and
Resident Dramaturg Timothy Saunders will give a talk on
October 13 & 20 immediately following the performances. Talks are
free and open to all. For ticket information, visit freeFallTheatre.com
or call the box office at 727-498-5205.