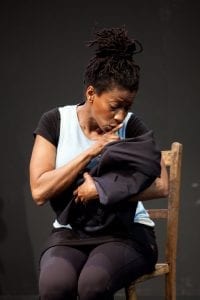 Theater Grottesco is kicking off St. Pete Performs at The Studio@620 with Consider This on Thursday, October 10.

Founded in 1983 by John Flax and Didier Maucort, the world-renowned company is based in Santa Fe, New Mexico and uses a combination of classical, modern and unconventional theater techniques to create surprising juxtapositions for audiences. Flax states that every show is “a celebration of our shared humanity.” 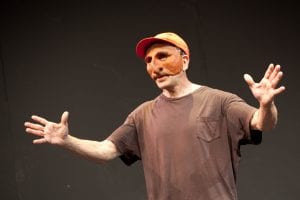 Audiences are invited to attend a free workshop to experience Theater Grottesco’s techniques firsthand at 10 am on October 10.

The workshop, titled Gesture as Cultural Memory, explores movement and instinct, inviting attendees to share in one another’s stories.

Creative Pinellas spoke with John Flax about the workshop.

What can attendees expect?

The workshop shows the power of using movement in storytelling. It introduces a second language that can either confirm or contrast what is being spoken — and how together, the story’s emotional impact can be deepened.

How are you defining and using ‘cultural memory,’ both in the context of this show and in the workshop setting?

When we see a child walking with their parent, we often notice similar patterns of movement and places where tension is stored in the body. That’s fascinating and can be traced through generations.

We’re not interested in proving anything scientifically, but what if the origin of these patterns and movements came from emotional moments that actually happened in the genetic lineage and we can isolate the moment that might have created a gesture that became a pattern or a way of holding oneself?

A single gesture can speak volumes when connected to an emotional experience. It will tell the emotional truth even when a person might try to hide that truth or is unaware of it.

Grottesco has worked with different forms of dance but we often create our own dance by beginning with gesture related to story, linking the gestures into phrases of movement that can become dance. 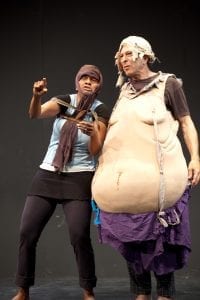 Theater Grottesco – Danielle Reddick and John Flax, working in the style of Buffoon.

Enjoy the irreverence of one of America’s most creative theatrical ensembles while they share the philosophy and the many theatrical styles that make up their fantastically imaginative original plays.

Theater Grottesco is an anomaly in American theater. The Grottesco artists create their own plays collectively. The choice of Realism, generic comedy or musicals, is replaced with a broad range of historical theatrical styles or combinations of styles – distinctly ‘unrealistic’ – and often pushing the artists into unknown territory.

Instead of intellectual arguments and emotion conveyed through a script, the company uses imagery, movement, stillness and silence to move audiences.

The artists prefer to ask questions rather than provide answers. And instead of three to six weeks of rehearsals, the company spends years developing a piece.

In many ways, Theater Grottesco is closer to dance, music and the fine arts than it is to conventional theater.

The performance ends with a live interaction where we the actors take stories from the audience and transform them into gesture and story.

The show will have time for Q&A.

All photos by Bob Brady 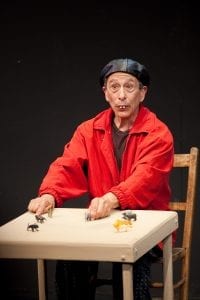