The World According to John Sims 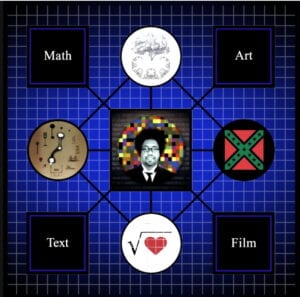 John Sims is the definition of a cultural polymath. Based in Sarasota, for the last two decades he has worked in a range of fields in cities throughout the country and abroad, mixing art forms, connecting communities and curating events.

He has continued to employ a variety of disciplines and production techniques – visual and digital art, quilting, film, journalism, music, wine, theater – to call out the human conditions, injustices and inequities that stick in his craw.

Recently, Sims shared, ‘I live an art-activism process that collaborates conceptual design, tech and text, in a way that sees both long and short term – producing a system of projects that are in conversation less with fleeting trends and media-driven excitement but in dialogue with the future history of human culture.”

Doing more than one thing with curiosity and vigor might be part of Sims’ own system. “I’m from Detroit, and went to a college prep school, but I also took classes at the vo-tech school,” he explains. “I was on both sides, college prep and tech side… and was also very involved in labor movement politics and left-wing politics. I think those things informed me.” 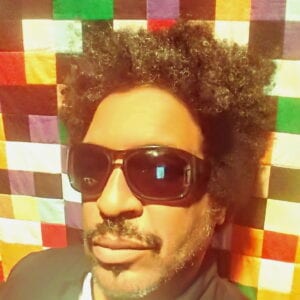 Dichotomies and paradoxes have continued to impact his work. “Part of my inspiration is connecting what seems to be opposites, the mixing of oppositional forces – I’m very intrigued by that.”

A graduate of Ohio’s Antioch College (see their alumni profile of him here), Sims worked at the college later to help create programs and events like the Cross Cultural Field Program (CCFP) and African American Cultural Week (AACW), bringing artists and musicians like Henry Threadgill and R.L. Burnside to the area.

A doctoral student in mathematics at Wesleyan University, Sims landed a position at Ringling College in 1997, developing a ‘visual mathematics’ curricula for its design students. He re-entered the world of art-and-activism fresh out of grad school as a conceptual ‘math artist.’ His philosophical ponderings meshed with his mathematical mind to begin creating a web of work – what he refers to as “systems” – in a variety of disciplines, all allowing him to interrogate his sociopolitical interests.

It began with math-art quilts – a year-long multimedia project, Rhythm of Structure. Then SquareRoots: A Quilted Manifesto, a series of 13 quilts created with Amish quilters. 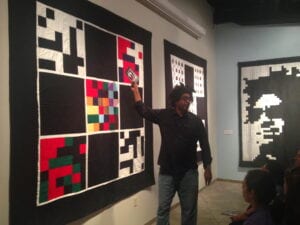 But as he drove around the Sunshine state, his northern, working-class sensibility was shocked by a subtle – and not-so-subtle – introduction to southern racism. Most troubling, for Sims, was the stubborn investment in the Confederate flag just beneath the surface warmth of many native Floridians. It spurred him to begin a creative exploration/opposition to the flag and its nod to the dehumanization of America’s system of enslaving and selling humans from the continent of Africa.

“The idea of taking the Confederate flag and making it black, red and green, taking those things, these oppositional symbols relative to each other and then creating this mixing element,” he states. “You think they’re opposite and shouldn’t connect… and boom.”

He has continued to evolve the project through the related, multi-artist musical project The AfroDixie Remixes (2002 – 2015) and subsequent controversial Burn and Bury Confederate Flag Memorial events. 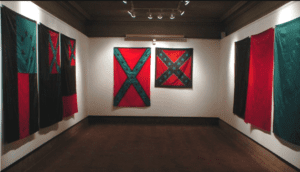 “As an outsider coming down [to Florida], I was much more sensitive to the Confederate flag, and I see it as visual abuse,” Sims has said. “You can get used to any kind of abuse and you can normalize it, after a while. So for me it was like walking into a place and seeing abusive behavior, but everyone else is just part of it. Not even accepting it, but it’s not a big deal, because there are other things to worry about.”

Sims acknowledged that it is still hard for Confederate-flag-loving southerners to understand that many Blacks see it as a nod to the dehumanization that came along with the institution of slavery. 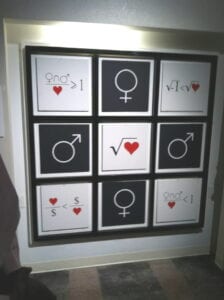 “I come in and I’m like, why. And they’re like, ‘What do you mean, you get out of here, this is none of your business, this is family business!’ But then, when somebody gets hurt, or killed… then everyone is like, whoa, wait a minute. In South Carolina it took this white kid, Dylan Roof, to go in and kill nine Black folks in church before the Confederate flag became a national discussion.”

Even the least polemical of Sims’ work focuses on injustice. Take, for instance, his SquareRoot of Love project, which started in 2010 as an art installation in New York – according to Sims, for the purpose of “engaging the product space of love through the interconnecting art of poetry, performance, food and wine.”

An annual event in Sarasota, and/or Paris and New York, SquareRoot of Love has explored themes including love, politics and power. It’s offered a tribute to “the global broken heart that we as humans endure collectively, and to the 17 victims and all the survivors of the Parkland High School massacre (SquareRoot of Love: Broken Heart).” It even resulted in its own wine. And a video ‘love letter’ (not) to Senator Rubio. 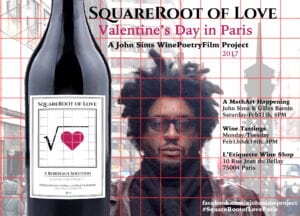 Let’s cut to 2020 – just when we thought he was out of creative ways to explore current events Sims unveiled his newest pop-culture-as-social-commentary project. His video game KoronaKilla – a mildly educational, motion graphics/aim-and-destroy game with a retro feel – was released just as COVID-19 was paralyzing the nation.

And when, only a few months later, the murder of George Floyd and the sweeping tides of protest that followed took over the media, without missing a beat, Sims penned his own media comment in a viral op-ed in the Orlando Sentinel. He also reworked KoronaKilla cover art into his recent online SQR Magazine commentary on the violence against Black folks at the hands of the police. 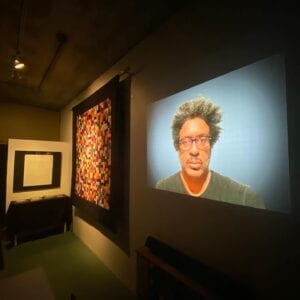 “I wish to contribute to the active dynamics of living and being that is situated in creative ritual, reflection, transformation – whether that might be a mathematics curriculum, op-eds, game design or confronting the white power legacy of Confederate iconography,” Sims has explained. “Systemic problems require systemic responses.”

Sims’ work will be exhibited as part of Skyway 20/21: A Contemporary Collaboration, which explores the work of artists practicing in Tampa Bay. In its second season, the exhibit is curated by the Museum of Fine Arts, St. Petersburg, The John and Mable Ringling Museum of Art in Sarasota, the Tampa Museum of Art and the University of South Florida Contemporary Art Museum in Tampa. The exhibit will be spread across all of these museums, at a date that’s yet to be announced.

To learn more about
the world of John Sims,
visit JohnSimsProjects.com