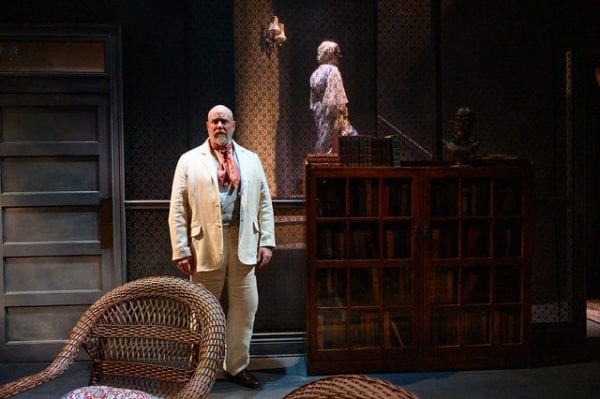 Eugene O’Neill’s final play comes back to life with a first-class production.

While taking in a story interpreted through flashback, we see characters and plot through a lens etched by different points in time.  As such, Eugene O’Neill’s Long Day’s Journey Into Night presents us with the art of story as a piece of intricate stained glass.
In his final play, O’Neill relates his family traumas to us honestly, unflinchingly but without melodrama. Secrets come out of the closet, challenging us to look inside our own dark spare bedrooms.
Revived almost 80 years after, we’re still in awe of this family portrait. With the passing of time, our evolving, broadening perspectives add additional fine lines and shading to its illustration.
American Stage offers both a fresh and classic view of Long Day’s after numerous award-winning runs around the world. Director Brendon Fox’s cast and crew capture the prismatic perspective of O’Neill’s classic play in all its kaleidoscopic glory.

A Day in O’Neill’s Life

Set in 1912 at a family summer home in Connecticut — much like the O’Neill family’s Monte Cristo Cottage in New London — Long Day’s Journey Into Night takes us back to events and conversations unfolding over the course of one fateful summer day, condensed into three and a half hours, which, incidentally, do not feel that long during American Stage’s production.
The play begins after breakfast at 8:30 a.m. with mother Mary, who has just returned from a respite at a sanitorium. Husband James (nicknamed Tyrone, the family’s last name) dances with her in celebration of her ostensible recovery. The mood is upbeat at first. The couple laughs, but we see Tyrone begin to regard his wife with cautious enthusiasm. He suspects that something is amiss, noting her time spent in the spare bedroom.
News of an illness and Mary’s relapse sabotage the happy reunion. The family’s disintegration of decorum and self-control unravels with exquisite tension and authentic drama as the play progresses.
Brother Jamie engages younger Edmund in some tender moments and mind-fuckery as siblings are wont to do.  Tyrone reminisces about his days as a former stage actor between shaming his wife for her morphine addiction. Mary blames her husband for her drug problem as he pours whiskey watered down by the sneaky sons and housekeeper. Tyrone dominates every conversation and belittles his sons. Mary, meanwhile, remains in denial, scolding her husband for past transgressions. 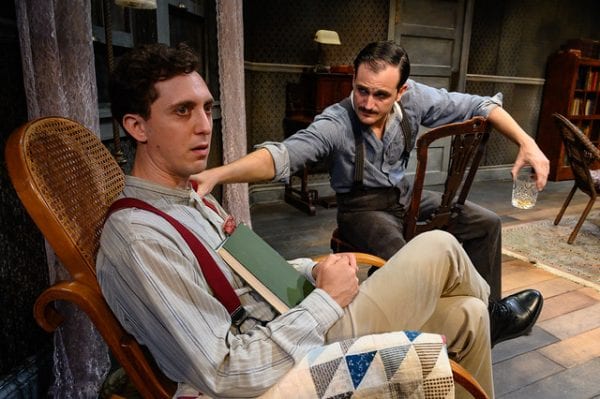 Josh Odsess-Rubin as Edmund and Billy Finn as Jamie. Photo by Beth Reynolds

Superbly cast, each portrayal in American Stage’s production engages us with authentic emotion and believable idiosyncrasies. Janis Stevens, who gave us two of the theater’s most compelling portrayals in Marjorie Prime and 4,000 Miles (one of my personal favorites), graces Mary with pathos, whimsical fancies and the glimmer of untapped potential. In one moment, she’s whip smart, taking to task her miserly husband. In another, she’s tragically lost in the fog of her memories.
James Keegan plays his patriarch James Tyrone with charming charisma and appropriate bluster. Though he angers us at times with his petty judgments and crass narcissism, we come around to him by virtue of the playwright’s affection for his real-life father and Keegan’s undeniable affection for the dapper Tyrone. He’s convincingly, at once, an unpretentious son of an Irish immigrant and a sentimental thespian.
Billy Finn provides just the right balance for the alcoholic elder son Jamie, who takes after his father more than he’d care to admit. Finn quotes Shakespeare and recites poetry as Jamie with natural ease.
And, finally, Josh Odsess-Rubin portrays the sickly avatar of O’Neill, Edmund, with sincere vulnerability. The globetrotting writer who contracted malaria and attempted suicide brings a world-weary wisdom to the household, observing his family’s clashes of ego and rehashes of resentment with a mix of concern and diplomatic detachment.
And, lest we forget, Rose Hahn’s amusing turn as sassy Irish housekeeper Cathleen. She breaks the tension with a pitch-perfect brogue and expert timing.
Costumes and set are on point, thanks to James Kronzer and Trish Kelley, respectively. They combine the Tyrones’ nobility of yesteryear and dismal, threadbare reality of the present.  The crew’s biggest star, however, is Phillip Franck and his poetic lighting effects. He re-creates the illuminations of the light bulbs that stingy Tyrone tries to turn off and provides a striking silhouette of Mary on the stairs and Tyrone next to her on stage, separated by a cleverly translucent wall.
And now that we’ve covered the production plaudits. let’s discuss the status quo of O’Neill’s family through the chiseled perspective of different time periods.

Through the Past, Starkly 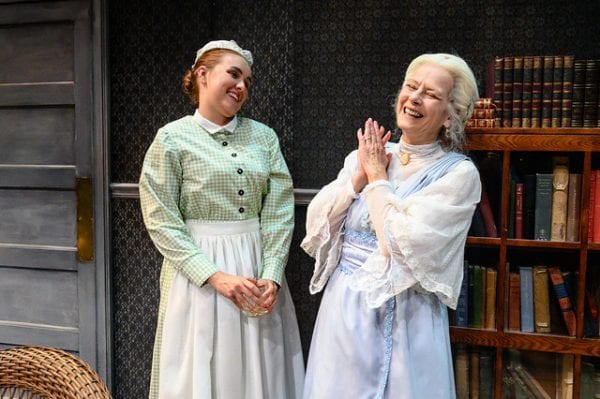 Rose Hahn as Cathleen and Janis Stevens as Mary. Photo by Beth Reynolds

Born in 1888, O’Neill had already achieved prestige as a playwright several years before excavating his memories for Long Day’s Journey Into Night, which he worked on from 1941 to 1942.

The first playwright to win the Nobel Prize for literature, O’Neill set Long Day’s two years before Congress passed the Harrison Narcotic Act to regulate opiates and make cocaine illegal. He mined such difficult territory regarding alcoholism and addiction that he requested that the story of his Irish-American family stay under wraps until another after his death,
Some other biographical notes: Second son Edmund represents O’Neill, who was actually born last in his family. O’Neill faithfully writes Jamie, O’Neill’s alcoholic older brother who’s determined to drink himself to death (which he does successfully some years later).
Speaking from a broader perspective, America changed drastically during the years between 1912 and the time O’Neill wrote the play. Women got the right to vote, doctors started using penicillin to treat what used to be terminal diseases, Prohibition saw its last call, the Great Depression devastated the nation and the U.S declared war twice.
When Eugene O’Neill typed his award-winning script, opiate addiction rarely made headlines. Hitler dominated Americans’ fears, and Alcoholics Anonymous had just begun to bring awareness to the world’s socially indulged addiction. With a new understanding of an ancient disease, O’Neill pondered how he waged his own battles with the bottle before he sobered up in the mid 1920s.
(Fascinating side note: Gilbert V. Sullivan, the psychoanalyst who inspired O’Neill to stop drinking, had gotten to know the famed playwright and his wife when they participated in his study on sex in marriage. For more on that tidbit, read this.)

In 1912, society was, of course, more patriarchal and even more ignorant of the human brain on substances.  Since we now understand more about how self-esteem, chemical imbalances and other problems commingle with addiction, we can infer how much agency Mary actually has in dealing with her problem and how much of it is forced on her by circumstance.
But attitudes vary even today. If each of us were to illustrate her ratio of self-control, we’d all come up with a different pie graph, most likely.
We also might take into account hypocrisies and stigmas around drug addiction and alcoholism. Both syndromes, we know now, take an almost equal toll on our health and loved ones.
And in analyzing the episodes of dysfunction and substance abuse in Long Day’s Journey Into Night, we once again see through a lens etched by both the past and present, encountering varying points of culpability. Is Mary truly at fault because she doesn’t pull it together and keep her sons and husband from drinking themselves to death? Does her sons’ and husband’s drinking and neglect do her in?  Does she deserve to be treated as an embarrassment to her family while everyone else in the house has carte blanche to destroy their livers with whiskey? Or is she just a woman born at the wrong time, prevented from carving out her own destiny?
We could also pose some pointed questions about the head of the household. Is Tyrone to blame for being a verbally abusive husband and father who sabotages his loved ones? Did he cause irreparable damage by burning out as an actor and making ill-conceived real estate investments?
What’s amazing about O’Neill’s play, is that we can all converse all day about the potential variables without being completely off the mark.
O’Neill gifts us with his awareness of changing attitudes. He assigns no blame as he recalls accusations and moments of humor and forgiveness.  His open-ended approach to his family reflects an ambiguous authenticity true to human nature and allows us to go deep and wide in our explorations of the influences on them — and, in turn, us.
Pertinent details:
Long Day’s Journey Into Night continues Wednesdays-Sundays through June 30 at American Stage. Arrive 30 minutes early to get the inside scoop on the play. On Sundays, June 16 and 23, “talkbacks” immediately follow performances. Ticketholders are invited to discuss the play while the experience is fresh. Free for ticket holders.