The Show Must Go On (and Did) 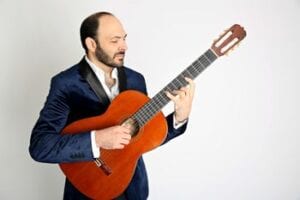 No way Nate Najar was going to cancel. Even though he had good reason to.

The jazz guitarist had been selected as one of three artists to reopen the Palladium Theater for live performances in October. His show was slated for Saturday the 27th in 800-seat Hough Hall in front of a socially distanced audience of less than 200. “The Palladium was establishing itself as a safe environment for shows,” Najar says. “Good ventilation, good seating plan. But the shows were a test run. Can you imagine if I had to cancel my show? That would’ve sent a bad message about the reopening.”

On the Wednesday before the gig, Najar was sitting at his kitchen counter answering emails when a call came in around 6 p.m. His wife, Daniela Soledade, who’s a singer, was on the phone with bad news. She had just picked up her daughters — ages 3 and 5 — from the home of her ex-husband, who told her he was positive for coronavirus. “I said, ‘I don’t know what to do. Should I cancel my concert?’” Najar recalls. “She said, ‘Maybe you should leave the house.’”

The couple — two married, working musicians — agreed that it was not an option for Najar to bow out of the Palladium concert. And it was far too risky to expose him to Daniela and the girls. So while the three of them waited in the car in the parking garage, Najar packed an overnight bag and a suit, grabbed his gut-string acoustic guitar and walked four blocks to the Vinoy Resort. He checked in around 7 p.m.

Thus began a strange and trying saga that could only have happened during this unprecedented pandemic. Najar estimates that he’s out about $5,000 — and counting — between lost gigs and costs associated with staying away from home.

“I expected to come home after the concert,” he says of the Palladium gig, which sold out and went over very well. That’s not the way it worked out. All told, the St. Petersburg native stayed seven nights at the Vinoy. “It felt like I was on tour with a few nights between gigs,” he says. “I could get up in the morning and walk to Kahwa to get an espresso, all the while knowing that my home was just a few blocks away. It was normal and surreal at the same time.”

After his hotel week was up, Najar and Daniela consulted with their manager and decided that from a health and business standpoint it would be better for the guitarist to extend his stay away from home. He had to wait for test results for his wife and stepdaughters. But Najar was “hemorrhaging money,” as he put it, so chose to move into his windowless recording studio in a warehouse in Largo. 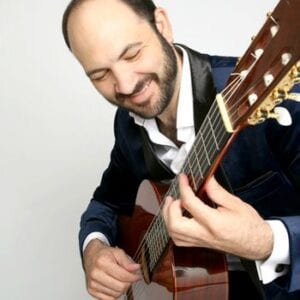 “I slept on the sofa from my old apartment,” he says. “It sleeps very well. I kind of enjoyed it in a way, although you couldn’t tell whether it was day or night. I worked on a production project, practiced my guitar, recorded a wacky, David Byrne-esque version of the [Jobim classic] ‘Waters of March’ that l will never let anyone hear. I was actively procrastinating from any real work I had to do.”

The industrial section of Largo lacked his usual amenities. “There’s lots of junk food places around there, but me and my family eat extremely healthy,” he says. “Still, I was ordering Uber eats — mostly stuff like pizza and Chinese. The Kahwa that was near the studio closed at the beginning of the pandemic, and never reopened. I was in an espresso desert.”

In all, Najar stayed five nights in the studio, finally returning home when his stepdaughters went back to stay with their father. Daniela, however, had tested positive. Twelve days away from home was enough, though, and Najar returned on Monday, October 26.

When I last spoke with Najar the following Monday, his stepdaughters had recovered from the coronavirus, but Daniela was ill with it, albeit a fairly mild case. He had tested negative a week prior, and that day was planning to get another one. Prior to his nearly two-week tribulation, the guitarist had started booking smaller gigs at Mandarin Hide, Intermezzo, the Horse & Jockey, the Independent in Tampa, and a couple of weddings.

He had to cancel every one of them.

All told, Najar says he held up quite well during his pandemic-induced exile, but he did miss something very important, although he realized it after the fact. “I was going squirrely and really wanted to go home, but it didn’t really sink in until after I was back a few days that I’d had no actual physical human contact,” he explains. “I’d see people and have conversations in the coffee shop, but it’s no substitute for hugging Daniela and the kids.”

As of our last conversation, Najar remained in Covid limbo, waiting to see if he would contract the virus. And how’s this for one man’s world being turned upside down? “What I really need is to test positive,” he says. “Testing negative but still being around my wife makes it really hard to plan and book jobs.”