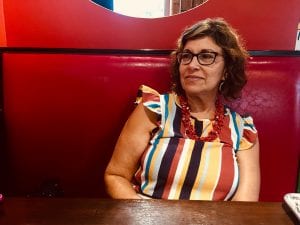 Gianna Russo and I spend a lot of time talking about hurricanes. It wasn’t intended to be this way, I’m sure, when Creative Pinellas matched us as mentor and mentee. Gianna is a respected poet and small press editor who is rooted in Florida, from its history to its cultural crannies and quirks. She’s also a post-secondary writing teacher, after teaching at the high school level.

In our conversations, Gianna has the ability to build me up even when I don’t realize I need a boost. She asks me questions not only about how I’m writing, but also about what I’m writing. She wants to know my character’s names. She wants to know about my plans to work comedy and moments of levity into my otherwise action-packed plot. And, when I’m struggling to get any work done on my manuscript after long days at work and my after-work freelance gig, she understands. “These weeks happen,” she says. “You’ll get it done.”

And that’s what I’ve found most in these first two months of our mentoring experience. Since Gianna is a writer who juggles many professional duties along with personal ones–and has done so throughout a diverse creative career—she deeply understands many of the struggles I’ve expressed around finding time to write, building a routine, working through blocks and producing my best work.

But we also talk about hurricanes a lot, over wine or tacos or both (writers need fuel!). Because Gianna grew up in Florida and I am a newcomer, she is happy to tell me about the ways this state has changed alongside the ways it struggles to retain its identity during this climate crisis. Along the way, she shares her own experiences as a writer, both the joyous ones and the frustrating ones. Despite everything she’s doing for her own writing projects, she still finds energy to give to me in the form of encouragement, coaching and camaraderie. And that energy, in turn, goes toward my own writing.