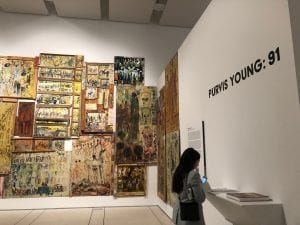 Also at the
Tampa Museum of Art 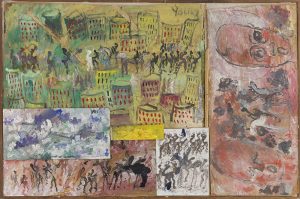 The exhibition Purvis Young: 91 presents for the first time the depth of the Purvis Young holdings in the Tampa Museum of Art’s permanent collection.

It’s a monumental display of 91 works by Purvis Young (1943-2010), covering the gallery from floor to ceiling. Paintings on wood, on doors, on found objects, are beautifully arranged in an overwhelming collage.

Young, a self-taught artist, created thousands of assemblages with imagery of protesters, pregnant women, and warriors on wood remnants, cabinets, and doors. The artworks reflect Young’s experiences and observations living in Overtown, Miami.

In 2004, the Rubell Family Foundation gave 91 works by Young to the Museum, one of the largest donations of the artist’s work in the Southeast. This is the first time all the works have been on display together. 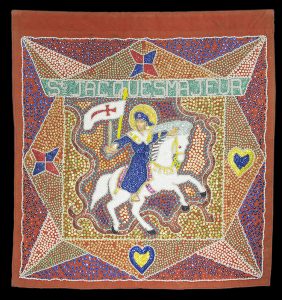 All three of these exhibits are part of Ordinary/Extraordinary: Assemblage in Three Acts.

The use of found objects such as discarded wood and textiles, links the exhibitions.

More importantly, historical and socio-economic narratives informed by the Afro-Caribbean Diaspora, the Black experience in America as well as European artistic influences, unite the artists featured in the series.

Although each is a stand-alone show, viewed together, the series explores provocative portrayals of race, identity, spirituality, survival and hope in a range of compositions. 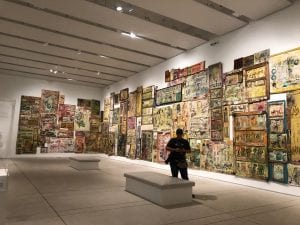 The Evidence
of Things not Seen:

On Display through November 10
Tampa Museum of Art
Details here

Currently on view at the Tampa Museum of Art is a trio of art exhibitions that consist of 91 delicious paintings on wood by Purvis Young, a large collection of brilliantly-hued Haitian Voodoo flags and two stunning pieces by Jean-Michel Basquiat (1960-1988).

The contents of all three installations reference and are a direct lineage to the African, Haitian and the Black American diaspora. Jean-Michel was such a shape-note-shifter (not schooled at the academy), that every surface within his sight and grasp, was an appropriate medium for his fertile and prolific imagination. These include discarded wood, linoleum, wire, found objects — and in his early years, under the pseudonym SAMO, structures and concrete balustrades.

Imagine walking the frenetic mean streets and alleyways of lower Manhattan circa 1979. You’d encounter many a Basquiat graffitied on the sides of buildings, large advertisements, wood scaffolding or even the ubiquitous fire hydrant. Those varied and “outsider” mediums are the delicious antecedents and necessary context to appreciate Basquiat’s later work. And it is that “Outsider context” that was still redolent and present in his creative output until his death in 1988.

A bit ironic as one of his large numbers sold at auction for 100 million dollars. Still, there is something edgy, poetically recalcitrant, intelligent, insistent and ultimately soul-satisfying about Jean-Michel’s work.

Basquiat’s work lands  precisely at that intersection where the paintings, at the very moment you are viewing them, catches its breath. I can’t claim to understand or even fully comprehend all the atavistic narratives of Basquiat’s paintings and three-dimensional work. However in the presence of his art, I am certain that I hear my own song… my breath, my daddy’s mile, my mother’s field peas, my Jim Crow, my Motown, my James Baldwin, my Uncle Roy’s laughter… sweet!

Jean-Michel is killing us very softly, deftly, with his song.

Basquiat’s work is the jarring of the floor in a Katherine Dunham dance, the wail of Miles Davis trumpet, the ache and sigh… the hurt humanity in Nina Simone’s voice. None of the “notes” in a Basquiat painting resolve themselves, just a barely audible finished silence… hovering, dancing in the air. So you keep listening. I keep listening, looking to experience that sweet spot of “knowing.” That jazz moment, where your knees seem to giggle and buckle with delight and your mind is harshly emptied, anticipating to be filled.

So what I know, what I have just encountered in a second visit to the Tampa Museum of Art to see Basquiat’s work… is having that jazz moment.

So I entreat you, prepare yourself to listen, to giggle, to be rapturously engaged.
The encounter requires, requests,
that you and your eyes and your ears greedily show up.

The two masterworks at the Tampa Museum of Art, Yellow Door and Untitled (Word on Wood), both from 1985. 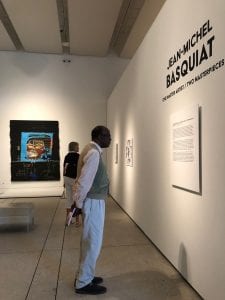 Hung side by side, the skull head of (Word on Wood) is oriented toward the Yellow Door assemblage to the left.

Through the Yellow Door we go… perhaps… to where?
back to the year of Basquiat’s birth, 1960
1960 prominent in the upper left corner of the Yellow Door
Vincent painted black crows circling, on the day he appropriated his life… somewhere between the yellow and the blue

and it was pretty bleak… black

Basquiat ended his existence @ magic 27
Hendricks, Joplin, Morrison, Winehouse, no. no. no.
I keep listening… 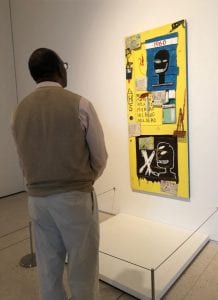 five or six times… painted near the bottom left side of the Yellow Door assemblage
You can’t but jar the floor one time for a miracle… or is it six?
photocopied text affixed to the Yellow Door
furtive glances toward the Blue Sky in (Word on Wood)
hints of Grace Jones, prominent cheekbones, reference the inverted American flag across the skull
African colors for the teeth, (like the colors in the flag, red, green, black in the margins)
a green dwarfish crown on the crown
the ace comb bottom left (also inverted) on four of the 26 matted black wooden slats
with a gaze that rather looks through you, with yellow and white eyes…

can’t open the Yellow Door. . . hinges are affixed on the inside, upper right-hand corner
so you crash through to open it (the door) like Basquiat…

along the banks of the Hillsborough River… I am gone, like a sax solo by Coltrane