Celebrating its 31st year, the ground-breaking Tampa Bay International Gay and Lesbian Film Festival is making a dramatic shift in its presentation this year due to ongoing Covid-19 considerations. For the first time in its history, the festival will be presented completely online. All films will be screened on the festival website using the technology platform Eventive.

Rob Akins, the Board President of the Friends of the Festival, states, “During these challenging times we are excited that technology allows TIGLFF to bring our audience the 31st festival virtually. The program will provide some much needed distraction from the challenges of the day.” 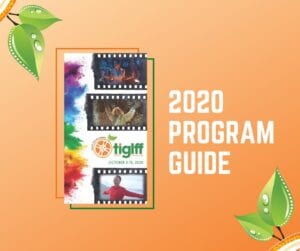 TIGLFF opens October 2nd and runs through October 18th. Any audience members yearning to return to the historic 1920’s Tampa Theatre, where the main offerings are usually presented, may be disheartened to learn films will not be featured there this year.

But the festival organizers have made up for this loss with a richly expanded and enhanced program. Now 16 days long, many festival selections will be accessible for multiple days to give viewers the chance to watch at their leisure, or to revisit their favorites. The roster of films celebrates what the organizers call “a rich spectrum of race and ethnicities from Black, Asian, Latinx, Jewish, Muslim and indigenous cultures.”

The focus on inclusivity reflects the desire of the festival’s new program director, Derek Horne. He also wanted to keep the tone of the festival upbeat and uplifting, especially in the midst of the pandemic. “I was pleased to find that the pandemic did not have an adverse effect on the quality of films we have to present this year,” he has stated. “In fact, judging from the high caliber of films, I would almost say that queer cinema is having a renaissance and crossing over into the mainstream. And while Hollywood has been shut down, independent films have been getting more of the spotlight.”

Fionn Whitehead, the handsome lead actor from DUNKIRK, stars in the opening night feature, PORT AUTHORITY, a gritty, contemporary drama set in Manhattan, with subtle riffs on Romeo and Juliet. Directed by Danielle Lessovitz in her debut, PORT AUTHORITY explores a surreal cityscape where a troubled young white man running away from his life in the Midwest finds a haven in the colorful trans community. Trans actor Leyna Brown co-stars as the exotic kiki ballroom performer who captures his heart. Martin Scorsese served as executive producer. (Available Oct 2-3).


Fans of STAGE MOTHER, which debuted in August in Tampa, will be delighted to find it has been brought back as the centerpiece screening of the current festival. Directed by Thom Fitzgerald, this audacious tale of a conservative church choir director from Texas who finds she’s inherited her late, estranged son’s drag club in San Francisco, pushes the edges on many levels. Jacki Weaver, who’s been nominated twice for an Academy Award, tackles the title role. Adrian Grenier and Lucy Liu co-star. (Available Oct. 9-10). Other highlights include. . .

SURVIVING THE SILENCE: The Untold Story of Two Women in Love Who Helped Change Military Policy, a 2019 documentary exploring the emotional coming-out story of Colonel Patsy Thompson and her wife Barbara Brass, who had to keep their relationship secret for years. (Available Oct. 14-17).

STEELERS: The World’s First Gay Rugby Club. Directed by one of their own, Eammon Ashton-Atkinson, this candid documentary reveals the challenges of a rough-and-tumble rugger team and their “spunky lesbian coach” as they prepare for the world tournament, the Bingham Cup. (Available Oct. 10-17).

A SKELETON IN THE CLOSET (Todos Tenemos un Muerto en el Placard o un Hijo en el Closet): A new film fresh from Argentina, this comic coming-of-age story packs a powerful punch with its depiction of a family wrestling with many layers of prejudice and pride. (Available Oct. 3-17).  Many of this year’s most intriguing offerings are in the festival’s popular Shorts program, available in three different packages, or as part of the access-pass for all films. Themes include hilarious takes on a zany bat mitzvah, glam rock, reincarnation, magic, fantasy, HIV/AIDS, teen romance and struggles with gender identity.

And for the closing night, TIGLFF has selected TWO OF US (Deux), a provocative lesbian drama/romance from France. TWO OF US exudes a rich mélange of styles – part love story, thriller and comedy. Starring Barbara Sukowa, well-known to fans of Fassbinder’s films, and Martine Chevalier, this twisty tale of life-altering experiences has been called “a tight, briskly intelligent chamber drama” by The Hollywood Reporter. Filippo Meneghetti directed. (Available Oct 17-18).

Tickets and information can be found at
tiglff.com and tiglff.eventive.org

More trailers are available on the TIGLFF YouTube channel