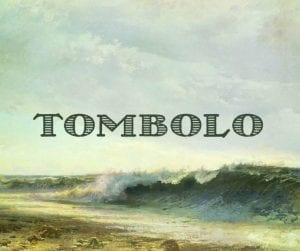 Sharing space with a restaurant, coffee and tea bar and gift shop near the University of Tampa, this independent bookstore, with its imported black-and-white Italian marble floor, is perhaps the most beautiful in the area.

Author talks are its speciality, including appearances by Michael Connelly (standing room only) and Salman Rushdie (off-site at Tampa Theatre).

Author Talks: Cassandra King Conroy (Tell Me a Story) on January 12 at 2 pm.

Isabella Allende (A Long Petal at the Sea) at Tampa Theatre on January 27 at 7:30 pm. 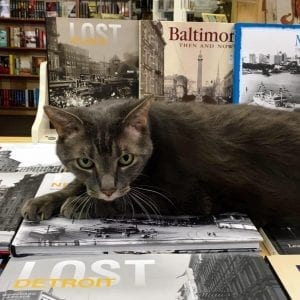 The granddaddy of Florida bookstores, Haslam’s first opened in 1933. Now in its third and fourth generation of family management, the store offers new and used books across a sprawling 30,000 square feet.

Look out for the bookstore cats — Teacup, Beowulf, Clancy and Emily. 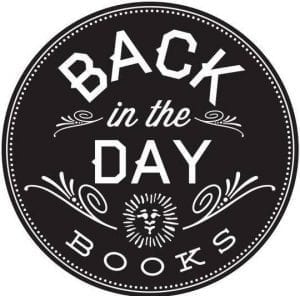 Back in the Day Books
355 Main Street
Dunedin
FB/BackintheDayBooks

Owner Boe Rushing, a former President of the Florida Antiquarian Bookseller’s Association (FABA) and a lawyer, offers books “from the classics to the obscure.”

Approximately half are new books and the other half are collectibles.

Located in downtown Sarasota, the store offers PoetryLife events and an amazing number of book clubs, including one in Spanish.

Vicki Huddleston (Our Woman in Havana: A Diplomat’s Chronicle of America’s Long Struggle with Fidel Castro’s Revolution) on January 24 at 2 pm. 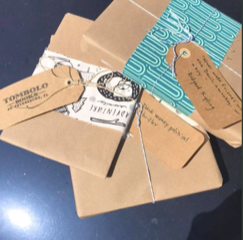 Interested in going on a blind date with a book?

Check out Tombolo, a curated bookstore at 2153 1st Avenue South, in the heart of St. Petersburg’s Grand Central area — opening its new permanent location on Saturday, December 14. Biblio blind dates will be a regular feature there.

Unlike eager suitors on match.com, however, these bookish wooers can’t be judged by their covers. No swiping right or left. Titles and authors’ bylines are hidden under plain brown wrapping paper. The only hint at what’s inside is provided by a tag attached to each book.

“Gothic Fable with Steinbeckian themes” another might tantalizingly promise.

“Blind date” tables are a staple at independent bookstores, says Tombolo’s co-owner Alsace Walentine who worked for 16 years at one of the country’s most beloved — Malaprop’s Bookstore/Cafe in Asheville NC. “When someone at an independent bookstore has a good idea, we all copy it. We’re not competitive. We are all very supportive of each other.” 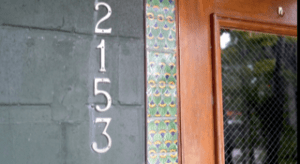 I am seated with Walentine at Black Crow Grand Central coffeeshop in mid-November before the location of Tombolo’s brick-and-mortar store has been made public. Wearing a green Tombolo T-shirt, Walentine is easy to spot. “My lifeline,” she admits, pointing to the coffee cup she is clutching. Miniature books with actual fluttering pages dangle from her ears. The earrings were made by “a one-woman bookbinder from Nashville,” she says when I admire them. (They are from Crowing Hens Bindery and, yes, the earrings will be for sale at Tombolo’s).

“Our bookstore will be just behind that wall,” whispers Walentine, peering over her black-rimmed glasses like Harriet the Spy.  “It’s the perfect location, next to a coffee shop and Squeeze Juice Works.”

Tombolo’s brick-and-mortar launch comes on the heels of the closure of long-time Tampa bookstore Inkwood Books. A mainstay in the area for over 25 years, Inkwood closed its doors in March (after it was sold and moved to Tampa Heights). That closure seems to be an outlier, however.  As Walentine points out in her video on the Tombolo Books Brick and Mortar crowdsourcing page at indiegogo, independent bookstores have been making an impressive comeback in recent years — in 2009 there were 1600 indies in the U.S. — this year there are 2500. (See sidebar for the list of independent bookstores in our area.) 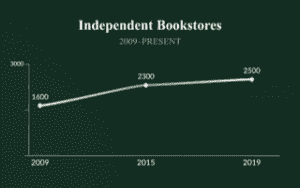 Our area certainly is adding to that trend. Next year another unique bookstore is scheduled to open downtown: Book + Bottle. The brain child of St. Petersburg native Terra Dunham who calls her enterprise “a wine bar with books,” Book + Bottle will be at 7 16th Street N (formerly Holmes Shoe Repair), just off Central Avenue.

“Every art city needs a curated bookstore” reads the slogan on Tombolo’s website. How does Walentine define a curated bookstore? “It’s a bookstore where the books are hand-picked and the personnel know their customers’ tastes,” explains Walentine, who welcomes the arrival of Book + Bottle as proof that the area is book hungry.

She has plenty of her own ideas to connect with her customers. Those “hand-picked books,” for example, will not only be picked by her and her staff. She plans to invite authors, artists, musicians, activists and others from the community to create their own curated table of titles. 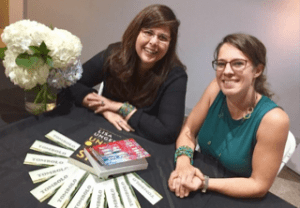 Authors Ann Patchett, Lauren Groff, Lisa Unger, Rob Sanders and Jeff VanderMeer already are offering curated book bag totes as part of Tombolo’s crowdfunding campaign at indiegogo. And an author’s talk is already scheduled — in January St. Petersburg author Sterling Watson will be at the store to launch his eighth novel, The Committee, set at the University of Florida in the 1950s. He will be the first of many, Walentine promises.

Tombolo, which Walentine co-owns with her wife Candice Anderson, is not really a “new” bookstore. It already has been around town for the past two years — in pop-up form. Since 2017, Walentine has been staging mini versions of Tombolo in places and for events all over Tampa Bay — at a yoga school, at books festivals and at author talks.

Walentine first started coming to Florida in 2015 when her wife was transferred from Asheville to Tampa Bay by her employee, a Dutch vegetable seed company. The couple decided they would give it a year to see if Anderson’s job worked out. Walentine started to come down south once a month. At first she was wary about making the move permanent. How could she leave a cool place like Asheville? How could she leave Malaprop’s where she had worked her way up from barista to manager and author events director?

But Walentine was impressed with what she saw here. Three times the size of Asheville, the area is booming with museums, art venues and interesting shops. The people she met, she says, “were amazing.” There was one thing missing though — a bookstore like Malaprop’s. How could she move to a city without a curated bookstore? 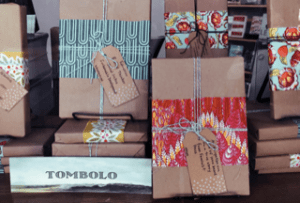 “Then I had my aha moment,” she admits. “I realized I could be the one to provide that bookstore. I thought, ‘I can do this. I have all the skills necessary to do this.’ And the area needs it.”

At Malaprop’s, she had been bringing in authors from all around the country for talks nearly daily. (Her biggest draw, Barbara Kingsolver, sold 1,200 books in one day). She could do that in Florida, she told herself — at her own bookstore.

She had found her purpose.

Shortly before moving to Florida, Walentine had a chance meeting at Malaprop’s — something that you wouldn’t believe if you read it in a novel — that felt like kismet. “I started chatting with a woman. I knew she wasn’t from Asheville — as I said, at a curated bookstore, we know our customers — so I asked her where she was from,” Walentine remembers. “St. Petersburg, Florida,” the woman replied. “What a coincidence,” Walentine told her. “I’m about to move there.” She explained to the woman about her plans to open a bookstore.

The woman, it turned out, knew a lot about running a bookshop in St. Petersburg. Her name was Patty Callaghan. She owned Brigit Books, a lesbian and feminist bookstore at 406 11th Ave. N. Callaghan, who sold the store in 2000, is now on the board of The LGBTQ Resource Center at Gulfport Public Library, which she helped found. 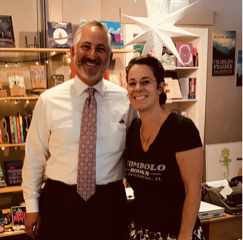 “I just talked her up to everyone I knew,” says Callaghan.

The book business has changed dramatically since Callaghan, who had been a librarian, began Brigit’s in the 1980s with $20,000. Nowadays it takes 10 times that amount to launch an independent bookstore. Back then there was no Amazon. When Kindles arrived, people said books would become obsolete, remembers Callaghan. But, of course, they didn’t.  When Barnes & Nobles came to town, she lost 25 percent of her revenue. “But when customers saw that their women’s section had books on hair and make-up, they came back and we survived.”

“Alsace is going to do just fine,” says Callaghan who finally gave up the business for family reasons.  “She’s very event-oriented, which is what she did at Malaprop’s. She’s  very smart. She’s already done all the right things. She enrolled in the Entrepreneurial Academy at the Chamber of Commerce. She wrote a business plan — I never did that. She’s gotten to know the area.”

“I didn’t plan to go the pop-up route,” says Walentine, “but now I would recommend it to anyone who is thinking about starting up an independent bookstore.” It’s a great way, she says, to try things out and learn about a community’s tastes and quirks.

She started small In early 2017, providing books for a book club at The Body Electric Yoga Company (the book club is still going strong). Later that year she set up shop at the Times Festival of Reading. Dubbing her display a “pop-up shop,” she imagined it would be a one and done deal and that soon after she would find a permanent venue for Tombolo. 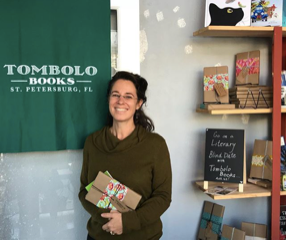 For the next two years, however, Tombolo pop-ups, well, popped up all over Tampa Bay, beginning with a temporary holiday shop in a 180-square-foot space at Central Arcades (so popular, it lasted five months).

Meanwhile, Walentine brought books to the Et Cultura and Localtopia festivals and sold books at the Straz when David Sedaris came to speak. She participated in Techstars Start Up Week Tampa Bay, the Association of Writers & Writing Programs Conference, the AWP’s Literary Death Match and Bouchercon, the national mystery convention at the Vinoy. She sold books for the Foundation for a Healthy St. Petersburg, Katee Tully’s Poetry Bar art installation and the Carter G. Woodson African American Museum.

In 2018 Walentine organized Tombolo’s first official author event at the ArtsXchange gallery in the Warehouse Arts District: a launch party for Pride: The Story of Harvey Milk and the Rainbow Flag, a children’s book by Rob Sanders and illustrator Steven Salerno. Part of the SunLit Festival produced by Keep St Pete Lit, the event drew more than 100 people. Later that year she repeated her success at the ArtsXchange, sponsoring a talk by Jason Lutes, the artist behind the graphic novel Berlin. This year she joined the SunLit Festival again, popping up at The Studio@620 with author Rob Sanders who was presenting another children’s book, Stonewall: A Building. An Uprising. A Revolution.

Walentine and her two siblings grew up in a creative atmosphere. Their mother is a painter as was her mother’s mother. Her father, a woodworker, was editor of Rodale Press’s magazine American Woodworker. Even as a child, Walentine gravitated toward books. “I’m an introvert,” she says. “Doing what I do is a way for me to communicate without having to be an extrovert. Books are an easy way to connect with others.” 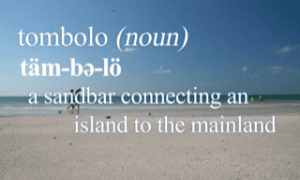 Which brings us to the bookstore’s unusual moniker.

“We brainstormed hundreds of names,” Walentine explains. Literary names like Literati in Ann Arbor and Flyleaf Books in Chapel Hill, location-specific names like Bookshop Santa Cruz and The Elliott Bay Book Company in Seattle, personal names like McNally Jackson in New York City and Nicola’s Books in Ann Arbor, local themes and inspirations (Florida, St. Petersburg, Pinellas County, the Gulf), local literary history (Jack Kerouac) and personal history and symbolism. “But when we came up with Tombolo, I knew it was the right one.”

Walentine was ready to leave the mountains of Asheville behind. She wanted to reflect the geography of her new home. Water. Islands. “Tombolo is the Italian word for sandbar, the landform that connects an island to the mainland. It is a connecting word,” she says.