When I was writing my short film Hatboxes, I found myself fixated on Robert Doisneau’s photo Le Baiser de l’Hôtel de Ville. 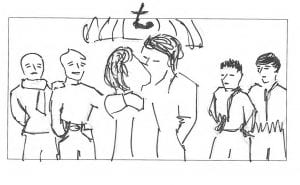 The script required a complicated night shoot for the homage I had in mind. In the scene, a secular Jewish lesbian has just left dinner with an Orthodox woman for whom she’s developing romantic feelings. She drives past a lesbian bar and observes a couple mashing on each other as they come out of the bar.

Problem was, we found during editing that the pace of the story screeched to a halt in that moment. The producer did the film a huge favor when she reminded me, “You’ve got to kill your darlings.” She was right; the film was better without that scene, and Hatboxes went on to screen at 15 festivals and conferences around the world.

Even though we did not use the footage, during the shoot itself that scene helped the actor connect with the character’s neither-fish-nor-fowl isolation, which reverberates through the final version.

Susana Darwin is a screenwriter and filmmaker.
Find out more at burmesetigertrapproductions.com