We are Family
Sunday’s Virtual Festival of the Arts 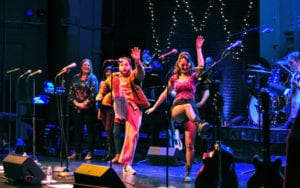 Covid-19 has affected us all — not only physically, but mentally, emotionally and financially as well. Pinellas County’s creative community are some of the most vulnerable due to canceled gigs, shows and assignments.

But this Sunday, May 10 we can all return to art and help local artists by participating as part of a Livestream audience for We Are Family, a virtual Festival of the Arts.

Alex Harris and Kristen Berset-Harris will kick off the festival with a live Facebook pre-show beginning at 3 p.m.

Net proceeds from this event will be contributed to the Pinellas Arts Community Relief Fund, a component fund of Pinellas Community Foundation. Tickets are $12.50. You’ll also have the opportunity to tip the performers.

Paul Wilborn, executive director of The Palladium Theater is excited about the event and the opportunity to perform. He and his wife, Eugenie Bondurant, have been busy preparing a musical show. 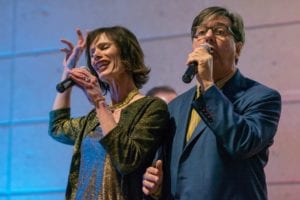 “We’re working with the best musician I know — I play the piano and he plays the guitar. We’re two couples and we’ve been doing Friday music nights to stay sane. We don’t even have a name for the group yet,” he says. “The virus shoved us down for about a month but then we recorded three songs Friday night.

“My wife’s an actor,” Wilborn says, “She was supposed to be in Atlanta for a big show she’s in. All the people who work here at the Palladium are shut down on every level. This really touches us.”

Wilborn prefers the money raised to go to other artists. “I know for some of us it has been a very creative time. I’m also a writer and have finished a book project.”

Another performer, Helen French, curates for Beacon Contemporary Dance in the Palladium’s Artist-in-Residence program. French is a dancer and says she’s been wanting to partner with the band La Lucha.

“We were scheduled to work together and when it got canceled, we were all super bummed,” she explains. “As a solo dance artist, I am essentially freelance. Where I love to make my work is in collaboration. I called up La Lucha and told them I have this crazy idea.

“I have a large backyard, basically a double lot. We opened my back gate. The band came and we stayed six feet apart. My husband got on the roof and filmed us, and improvised. They started playing music and I started dancing — four artists who’ve never worked together in my backyard. We did two versions. All we did was set up camera shots. We just wanted to get together and make art.”

The Florida Bjorkestra is a tribute band that focuses on different artists. It started as a tribute to Bjork, hence the name. “It’s a giant ensemble with anywhere between 20 and 30 people,” leader Jeremy Douglass says. “We’ve done tributes to David Bowie, Kate Bush. Tori Amos — we basically play my favorite music. We have a string section, horn section, mostly made up of independent artists.”

Douglass is ready for Sunday’s festival. “It coincides with the past several weeks I’ve been working with all 27 of us, recording a song together. It coincides that the festival is coming up. I am happy to participate any way I can.

“I am always driven to be part of some creative project all the time. The limitations [of the pandemic] have forced a lot of us to think creatively, I have a drive to be creative but I’m already in a situation that forces me to think differently.”

So, let’s all think differently this Mother’s Day, May 10, and support our artists as we keep our distance physically, but not necessarily emotionally.

More on this event can be found here