In Your World, You Are the Spy of Yourself

A Surreal Exploration of Time and Power 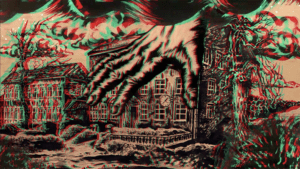 Sun Xun: Time Spy, currently on view at the John and Mable Ringling Museum of Art in Sarasota, consists of a 3-D film and an array of artifacts. The centerpiece of the exhibition is the animation, Time Spy (2016), on view in a blackbox theater.

The exhibition couples the animation with the hand-carved woodcuts used to create it, presented as artifacts from long ago.

Sun Xun graduated from the Printmaking Department at the China Academy of Art in 2005. Soon after, he formed an animation studio in Beijing called Pi. With the assistance of a team of artists and animators at Pi, Sun is able to create intricate works of art.

Time Spy is no exception. The woodcut cells have a unique texture and tactility. The characteristics of the carving process, such as the marks made where the groove of the chisel fades from wide to hair-thin, or the carved-out, light brown and wood-tone areas, are unlike any mark made with brush or pencil. 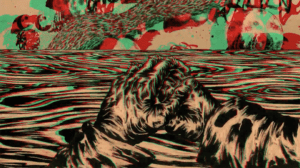 The black-inked wood and linoleum panels depict businessmen, animals and mythical creatures interspersed with images of astronomy and industry. They seem like anachronisms presented alongside a 3-D animated film.

The film, Time Spy, is a nine-minute long, surrealistic animation that beckons interpretation. There aren’t clearly defined characters or storylines. Meanings are conveyed with allegorical cues, tenuous connections and tone. 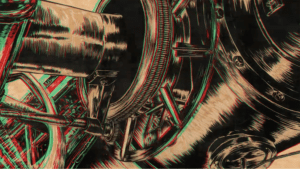 Its narrative loosely centers around an omniscient figure controlling the universe. A man in a top hat is shown wringing his hands. Gears grind at distorted angles, making the inter-workings of machines seem large and dangerous. An eye fills the entire screen, and blinks open to reveal planet where its pupil should be. 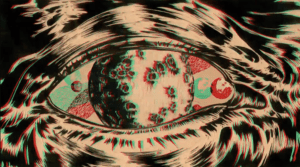 Sun’s imagery is informed by his upbringing in Fuxin in Liaoning province, near China’s northeast border. Born in 1980, he grew up in the aftermath of the Cultural Revolution, and experienced authoritarianism as a child.

A 2008 essay by Mathieu Borysevicz described the social environment of Sun’s childhood. “Propaganda still blared from loudspeakers every morning, bringing the factory complex where he grew up to attention, just as it had done for the past few decades.”[1]

Sun believes history is constantly rewritten by those who are in power, but Time Spy doesn’t represent themes of authoritarianism and propaganda in overt ways. Instead, the film conveys such themes as surrealistic archetypes. 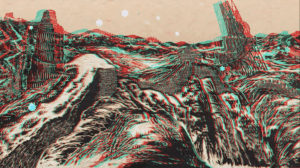 Paget focuses on history and civilization when describing the meaning of Time Spy. “The film is about technology and progress, but then, with the last still, you see these great monuments to human achievement – the Great Wall of China, the Tower of Babel and the Monument to the Third International. They were icons of the great promise of human civilization, but we see them as ruins left for future civilizations to find.” 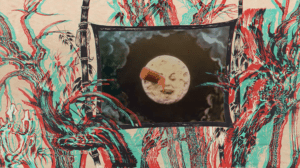 With recurring images throughout, the erratic temporal structure of Time Spy makes it seem like no progress has been made. Sun’s understanding of history being rewritten by those in power may also be represented by such temporal erraticism.

“You cannot touch yesterday. You cannot touch tomorrow. Just a moment: right now. You always live in this time… Who is the spy? In your world, you are the spy of yourself.”[2] 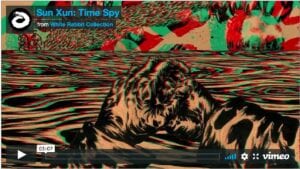 A conversation with Sun Xun about the film

. . .
Sun Xun’s 3-D woodcut animation can serve as a reminder to always question the motivations of people in positions of power. Such an understanding is based, in part, on Sun’s experience with authoritarianism as a child. It also shows up in his work as archetypes of power. 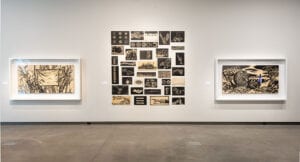 Sun Xun: Time Spy at The Ringling Museum of Art

Signifiers for the medium of film further emphasize such an understanding by exposing its role in shaping our society’s relation to time and history. Time is represented as ever-present with Sun Xun: Time Spy, because seemingly anachronistic woodcuts exist alongside the latest technology in film.

Like Time Spy, the exhibition makes us wonder if everything has come to a standstill.

Find out more about
Sun Xun’s work thanks to CNN