Do you know that old saying, “The truth is stranger than fiction?”

I think of it often when I’m doing research for my novel. I don’t always open news websites or magazines looking for elements to work into my fiction, but I find that the same themes reappear often, and sometimes in ways that inform my work.

Here are a few examples from the past month or so. 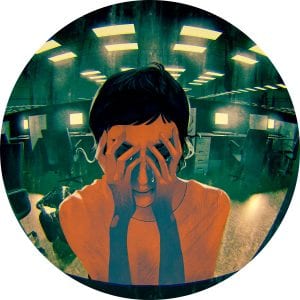 Illustration by Corey Brickley for The Verge

“Bodies in Seats” by Casey Newton for The Verge

This is Newton’s second feature about how contractors who serve as Facebook content moderators struggle with graphic content and stressful working conditions. After the initial piece in February entitled “The Trauma Floor,” that takes place mostly in Arizona, Newton’s second piece focuses on events at a moderation contract site in Tampa.

While Facebook doesn’t appear by name in my story, one of my characters spends some time in a government facility where she’s made to moderate online content. Newton’s pieces have offered elements and emotions to work into those parts of my story. 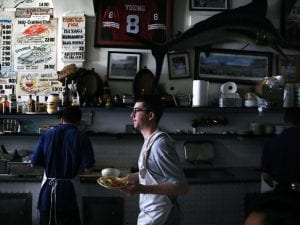 You might recall the Northeast blackout of 2003. In our distant memory, it may seem like just a blip. But that event was an indicator of a larger problem with America’s infrastructure. Oberhaus notes this event as he dissects the recent massive blackout in Argentina and parts of Chile and Uraguay. The article describes the conditions that have made the U.S. and various parts of the globe more susceptible to power outages, including the higher number and increased intensity of storms. For a story that hinges on natural disasters, this was a must-read for me. 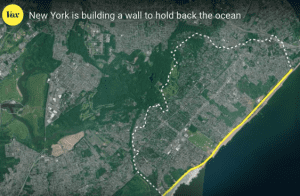 “Will New York’s New Sea Wall Protect The City From Climate Change?” by Alissa Walker for Curbed and Vox

Here’s another climate change story that stuck with me: a video highlighting one option for protecting a neighborhood in Staten Island by building a five-mile sea wall. I’m always interested in tales of resiliency in American communities facing the first impacts of climate change, whether it be building barriers like this one or changing zoning rules.

This collaboration between Curbed and parent company Vox made me recall Going Under: The Story of Tangier Island, a podcast about a small island in the Chesapeake Bay that’s essentially vanishing. I listened to that podcast on my drive to Penland in January. It certainly helped set the stage for that period of focused writing, as these articles and many others have continued to do.