Artists Who Inspire Me 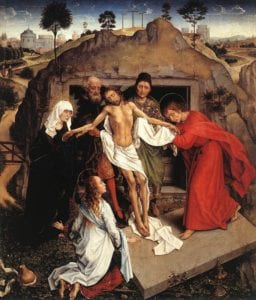 Lamentation of Christ by Rogier van der Weyden at the Uffizi

Ever heard stories of someone being dumbstruck during an encounter with a work of art?

It happened to me in The Uffizi Gallery in 1983 while I was a student in art school. I turned a corner and my eyes fell on Rogier van der Weyden’s painting The Lamentation of Christ. It wasn’t the religious content that affected me so deeply — it was the way the artist used a combination of color, composition, imagination and paint manipulation to create an image that was believable yet otherworldly at the same time.

That event began my lifelong love affair with Netherlandish art.

Since that time, a multitude of artists have influenced me deeply and continue to inform my own work. While most are men, I adore the work of Frida Kahlo, Dorothea Tanning, Artemisia Gentileschi, Angelica Kauffman, Leonora Carrington, Dana Schutz, Cecily Brown and so many other female artists. Yet, here are just a few of the figurative artists if keep returning to. . . 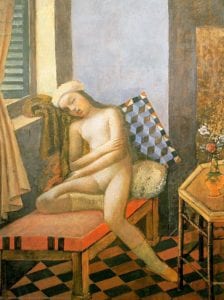 His anonymous figures are manipulated in ways that soften details and dislocate anatomy. If he paints a seated figure, the body is draped across the chair like a tossed coat. There’s such a strong sense of gravity pulling the body towards the floor.

I’m also seduced by the way his surfaces seem to be eroded. The paint is often scraped or scumbled onto the canvas giving a sense of a crumbling old plaster wall in Rome. 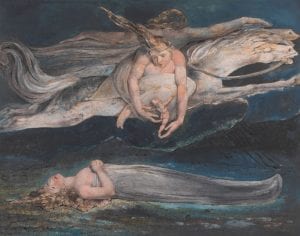 William Blake
1757 – 1827
Blake is considered as much a poet as he is a visual artist. He presents us with a mystical world that emerges entirely in his own imagination.

Like Balthus, he takes great liberties with his figures. They are bent and twisted by the magical environments they move through.

Unlike Balthus, however, Blake has little interest in gravity. In his imaginary worlds, figures are shown in flight as often as they rest on the ground. These ethereal settings are conveyed through his use of watercolor, etching and lithography, often giving the images a silvery, shimmering tone. 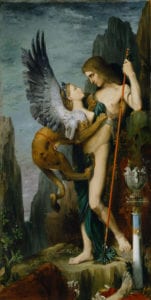 Gustav Moreau
1826 – 1898
Moreau leans heavily on mythology for his subject matter. Viewers find themselves in recognizable but alien surroundings. These are imaginary lands we are not able to visit, and might not want to if we could.

It doesn’t matter that we might be unable to decipher the action taking place or identify the individual being depicted. Instead, Moreau treats us to an explosion of detail, pattern and color.

These paintings seem literally to be encrusted with jewel-like surfaces reminding me of crushed-glass rainbows. 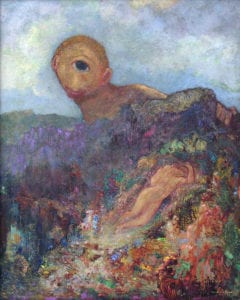 Odilon Redon – The Cyclops at the Kröller-Müller Museum

Many of his most memorable and deeply psychological images can be called nightmarish, employing only black charcoal on paper.

But he also created many works that seem to open a window on a paradisical plane. In these he often chooses a luscious array of glowing pastels to give the impression of light passing through shredded scraps of brightly colored tissue paper. Details to savor are both in the subject itself and on the physical surface of the painting. 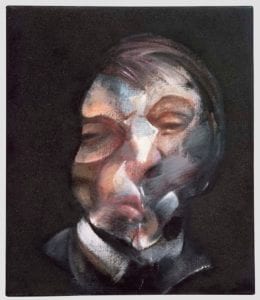 Francis Bacon – Self Portrait at the Centre Georges Pompidou

Bacon was unafraid to travel to the darkest places of himself and society. He looked unflinchingly and revealed all that he saw and felt. This may not be the goal of every artist but he was among the best in achieving it.

The figures he painted appear to be dissected or dismembered, the scraps left in a heap and hanging together by sinews after he finished with them. His intention was to make them hard to look at but exquisitely beautiful in their own way if we take the time to see and feel. 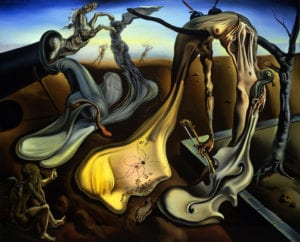 Salvador Dali – Daddy Longlegs of the Evening-Hope! at the Dalí Museum

Salvador Dalí
1904 – 1989
Hard to know where to begin. Dalí’s work appealed to me as a young artist for the typical reasons he appeals to so many — dream-like imagery, hyperrealism, optical illusions.

By example he gave other painters permission to throw rationality out the window and paint whatever the hell we wanted. The weirder, the better.

Little did I know that I’d one day be a docent at the Dalí Museum and become fully immersed in an exploration of his life and work. Similar to Bacon, Dalí was fearless and unashamed in using his own terrifying inner workings as subject matter. Unlike Bacon, he also didn’t flinch at experimenting with endless varieties of existing — as well as experimental — media and techniques. 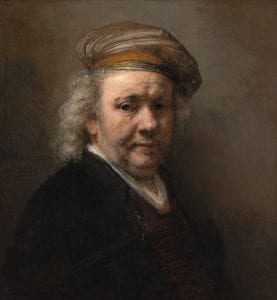 Rembrandt – Self-portrait at the Mauritshaus

Last but not least,
Rembrandt van Rijn
1606 – 1669
It took me many years to fully appreciate Rembrandt’s immense talent and importance. I can’t think of another painter in whose career we watch the transformation of a young, earnest artist into one who (for lack of a better word) breathes paint onto canvas.

When I look at Rembrandt’s late works I see the transmission of concept into physicality with no effort or struggle. It’s as if his thoughts miraculously become paint and image. I see no guesswork or wasted energy. No hesitations, reservations, bluster, fear, cheating or uncertainty.

He’s humbly and honestly revealing himself. So simple and innocent, yet to arrive at that place took a lifetime of great achievements and tragic losses.

There are so many other artists that I could have included here. Perhaps the most obvious common thread connecting the ones I’ve mentioned is representation.

These painters paint things that look like things, yet aren’t. The physical painting is not meant to be the thing represented. The image is a snapshot, incredibly beautiful in its own way, of the artist’s view of something they want to share with us in a way that is unique to them.