It was Cats, Hamilton and Phantom of the Opera all rolled into one. It ran on the London stage for nearly 800 continuous performances, and the royalties — along with trinkets sold in concert hall lobbies — made its creator rich.

It was, of course, The Merry Widow, the most popular of all operettas, still going strong since its premiere in Vienna in 1905. Franz Lehár never matched the success of this light opera, with its elegant ballroom scenes, lush costumes and sparkling score. Although it overshadowed more than 40 of his other works for the stage and bore him the moniker of a one-hit wonder, Lehár would no doubt be pleased by its permanence well into a new century.

The Merry Widow appears in new clothes when the St. Petersburg Opera Company launches its 14th season at the Palladium Theater in St. Petersburg. The $150,000 production includes three performances October 18-22. 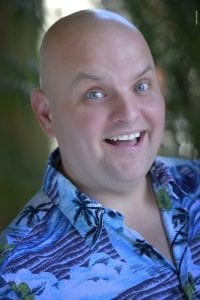 “It absolutely has appeal even today,’’ says Matthew McGee, who plays the embassy secretary, Ngegus, in the new production.  “The songs are beautiful, the English dialog is easy to follow, and it’s really quite funny. It has great comic moments.’’

In a nutshell, Merry Widow is about an affluent and beautiful woman named Hanna and the men who desire her — or more accurately, her cash. The plot revolves around the possibility of her marrying a Frenchman and as a consequence, the fictional Balkan province of Pontevedro losing out on the fortune of one of its wealthy residents. If Hanna marries a foreigner, all bets for keeping her money in state are off.

“She’s the one the men all covet because of her glamour and money,’’ McGee explains. “The men are mostly buffoons and so they’re really out of their element in trying to be diplomatic with her. It’s like a bumbling group of politicians wreaking havoc.’’ 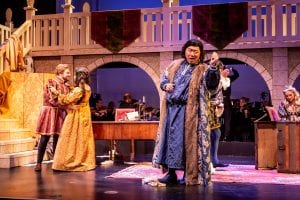 Similar to the lead character in Bizet’s Carmen, Hanna can be viewed either as a woman being manipulated or the one doing the manipulating. But unlike her darker counterpart, Hanna carries far less psychological baggage — in fact, The Merry Widow is lighthearted from start to finish, without tragedy and murder staining the stage. The libretto may be silly, but it stays afloat on Lehár’s sumptuous score. 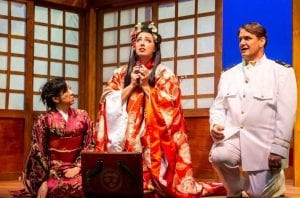 Merry Widow casts one shadow, however. It was said to be Hitler’s favorite operetta (he reserved large-scale operas and music dramas for Wagner). Lehár was feted by the Nazis during the 1930s, even though his wife was Jewish. To protect his marriage, Lehár composed a new overture and dedicated it to the Fuhrer. After the Anschluss, Lehár left Austria and settled in Switzerland, where he died in 1948.

During the turbulent war years, Merry Widow offered audiences much-needed distraction, and that might be the case now, McGee says. 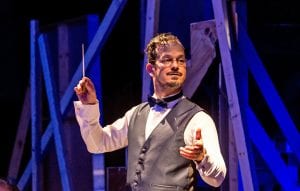 “I think it works so well today because we can’t turn on the news without seeing something negative, and Merry Widow is a total escape from all that,’’ he says. “I think audiences are going to fall in love with it.’’

Artistic Director Mark Sforzini, who conducts a 25-piece orchestra in the new production, embraces that sentiment.

“Even though it’s nearly 120 years old, people can relate to it as a beautiful love story, as well as all the political gossip and antics going on,’’ he says. “And the music is timeless. When it was written, it rocked the world.’’