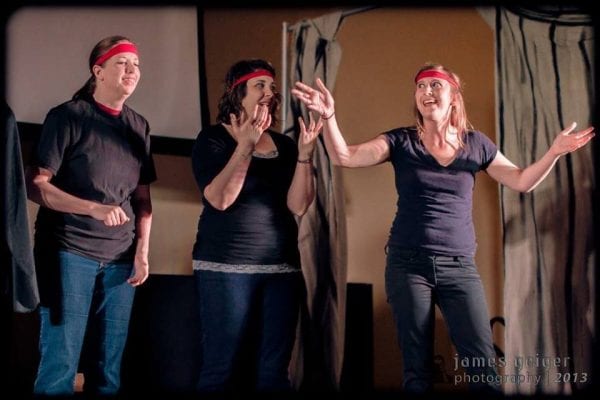 As a die-hard fan of SNL, Monty Python and Kids in the Hall and other talented comedy troupes, I have wanted to write about Tampa sketch purveyors Some Sort of Show for some time now.

Cobbled from emerging local actors and vets of the theater scene, SSoS is the type of troupe that I tried in vain to wish into existence in my youth (as well as the performing gifts of Madeline Kahn). When they finally emerged and became, well, them, hardcore adulting prevented me from glomming onto them like a full-time groupie.

At least I can spread the word about their comedic goodness with you, dear readers. Tonight, you can catch SSoS Episode 5: ‘Twas The Night Be-4/20, and every two to three months at Stageworks Theatre in Tampa.

How do you recruit? Do you scout improv troupes or host auditions?

We have an ensemble that has been growing over the years, and we pull from there. We work a lot like SNL. We have our regulars, our featured and our “newbies.” We audition at the beginning of our season, usually around August. We also pull local actors to be “guest artists” in some of our shows. We are always looking for some funny folks to add to our family!

Your troupe has a strong female presence like SNL … a natural turn of events? Any obstacles or challenges? I think for both SNL and your troupe, having women star in sketches and not just co-star or play the girlfriend etc., has brought some of the funniest players out in front. Do you guys have any women-centered gags or sketches you’re particularly proud of?

When we started this almost 10 years ago, SSoS was a hodgepodge of different folks from different walks of talent. We always had stong females in the group but it was mostly male-driven. Our writers have always tried to add unisex roles or even out male/female roles as much as possible.

I took over as Artistic Director two years ago. I’ve always been a fighter for “woman are funny too” and wanted to make sure that this was a staple for Some Sort of Show. We have some of the funniest ladies in the Bay area in our ensemble and I couldn’t be prouder of that. They make my job sooo much easier!

Jonelle, Emily and I have shared the stage of SSoS since the beginning. We have had so many roles that we love and cherish. I think one of my favorite times on stage together was when we all played a guy name Chad. That particular episode (that’s what we call our shows) was very female heavy cast. One of our writers wrote a sketch for 5 guys all playing a different frat guy named Chad. I thought to myself … I think the ladies can do this … and so we did. We all “guyed” up and played different Chads with one of our male actors playing a guy named Greg. It was so well received that our audience has asked for more from those characters. I believe you’ll see the Chads some time soon! 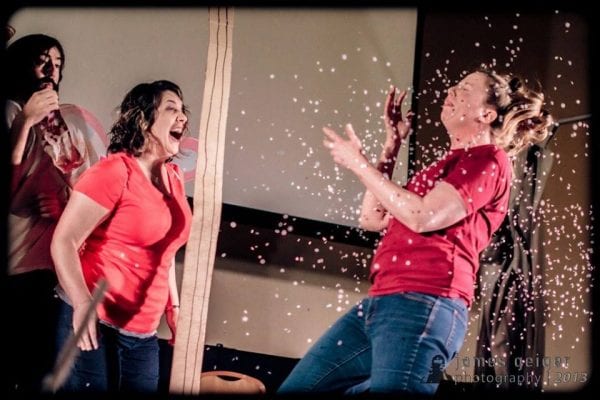 How do you come up with the sketches?

We have amazing writers. Our head Writer is Ryan Bernier. He and I discuss our themes for the episodes and then he brings it to our writers. Then our writers have about two weeks to write our sketches. Then we do a read through with the cast, after that we have about four days of rehearsal, cram all of those amazing lines in our brains and produce the show on a Friday night. It’s usually about a 2-3 week turnaround from ideas to show, and we sometimes give them certain ideas or limitations depending on our cast for that show or our theme. For example, this episode is about 4/20 and everything that comes with that. But we are a small cast this time around (we usually have about 8 folks, this time we have 5 with a special guest) so the limitations where no more that four per sketch and must be something to do with 4/20. The writers did not disappoint!

Yeah, wondering how you approach playing to a crowd that may advocate for legalization of cannabis while riffing on stoner gaffes. Would it be like roasting the stoners?

Our goal for SSoS is to entertain and to be inclusive. We try not to do too much with politics and such. We try to be as “equal opportunity offenders” as possible, to poke fun as certain situation that people might not want to talk about but we don’t want people to walk out. It does happen from time to time, but it’s all in good fun. We have an amazing writing and acting staff that really work well together. If something is a little off to someone, we address it. Sometimes when something is written down it doesn’t have as much consequence to it as if someone actually saying and acting out those words. We also try to warn folks about what the episode is about. If you are totally against anything POT, then this show might not be for you … but if you wanna see some of Tampa’s funniest folks on the same stage trying to make you laugh while talking about pot, getting high, not getting high, being a mother, or just making silly noises, then this IS the show for you!