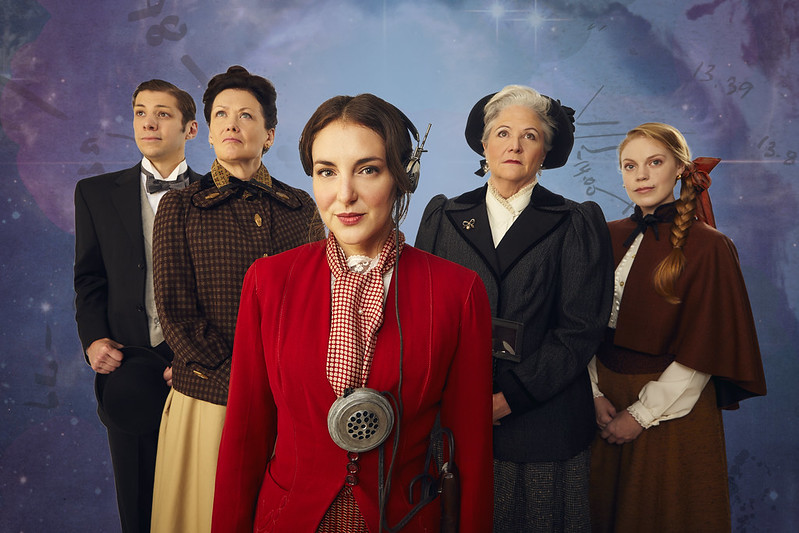 Silent Sky takes us into inner
and outer orbits

The conjunction of science and art, of the universal and intimate, inspires playwright Lauren Gunderson.

She studied physics at Emory before majoring in creative writing and in the past decade has written a slew of well-reviewed dramatizations in addition to crowd-pleasers like the recent Pride & Prejudice holiday reunion, Miss Bennet: Christmas at Pemberley. Her dramatizations center on largely unknown, real-life women scholars whose work altered the course of history.

Gunderson’s trailblazers include Émilie du Châtelet, an Enlightenment-era genius who revised Newton’s laws of motion (Emilie) and Olympe de Gouges, a playwright who fought for women’s equality in the French Revolution (The Revolutionists). Gunderson depicts Ada Lovelace, Lord Byron’s mathematician daughter (Ada and the Engine), as recognizing binary code in the beats of poetry and music.

In Silent Sky, the music of the universe comes into play again, providing both irony and an uncanny explanation of a stellar phenomenon. It’s pretty funny too.

The play opens in Wisconsin, where we meet the Leavitt sisters at the family farm. Henrietta (Susan Maris) tells sister Margaret (Kate Berg) that she has taken a position at Harvard College Observatory where she would work doggedly to find “where we are in the universe.” Henrietta invites Margaret, who in addition to playing and composing music for the church, is also engaged and chooses to stay behind.

On her arrival and to her dismay, Henrietta is forbidden from using The Great Refractor Telescope of her time. She and her female colleagues, Annie Cannon (Vickie Daignault) and Williamina Fleming (Karel K. Wright) examine photographic glass plates, and painstaking note the location of every star pictured on them.

Like her 1960s counterparts in Hidden Figures, Henrietta must settle on working for a pittance as what’s called a ‘computer’ but happens on a breakthrough while working after hours.  She notes the luminosity and pulsations of Magellanic stars known as Cepheid variables. Her findings provide a basis of distance measurement and pave the way for future breakthroughs by Edwin Hubble and other luminaries.

And as one would imagine, Henrietta makes personal sacrifices. There are lost opportunities, losses and un-lived experiences with loved ones, all the casualties of her work. Orbits of faith, family, love and the Suffragette Movement spin without Henrietta as the determined astronomer forges on. Meanwhile, Gunderson’s script propels us forward chronologically through voiceover narration, bringing into scope the one phenomenon even the most brilliant scientists can’t conquer — time.

Newcomer Maris turns in a knockout performance as Henrietta. She makes the plucky stargazer and protofeminist likable, believable and utterly lovable with a flair for whimsy and sass.

Silent Sky also gives us the long-awaited return of Benjamin T. Ismail to the AS stage, as Henrietta’s awkward colleague and suitor, Peter Shaw (he and Margaret are the play’s only fictional characters). A frequent American Stage director and behind-the-scenes multitasker — who last appeared onstage as an impressively nuanced terrorist in The Invisible Hand (2017) — Ismail balances poignance and humor, fleshing out Peter as more than a plot facilitator.

Co-stars Kate Berg (Bad Jews), Karel K. Wright (One Slight Hitch) and Vickie Daignault (Good People, Between Riverside and Crazy) also provide a much welcome return. Daignault gives us a charismatic, strong-woman role once again. Wright pulls off an irreverent Scottish astronomer with amusing irreverence and Berg conveys the tacit acceptance of traditional womanhood with an undercurrent of ambition.

Director Kristin Clippard defies time and space with her players. Between monologues that stretch across years at a time and mentions of future events, such as Leavitt’s posthumous Nobel Prize nomination, she not only arranges the players in a seamless fashion but brings out a familiarity and intimacy that makes us feel like we know Henrietta, her sister and cohorts on a more personal level.

Altogether, the cast and crew of Silent Sky convey “transcendental ‘holy crap!’ moments,” as playwright Gunderson calls them, balancing out the starstruck musings of an overworked astronomer with warmth and relatability. It’s a worthy representative of American Stage’s new theme for 2018-19, “An American Dreamscape” — stories that take us on the adventures of pioneers and risk-takers, and it’s a production worthy of Lauren Gunderson’s Renaissance-woman genius.