With all gigs canceled or on hold, Matthew McGee — actor, singer, comedian, drag performer — uses his down time to rest and re-energize. And worry. 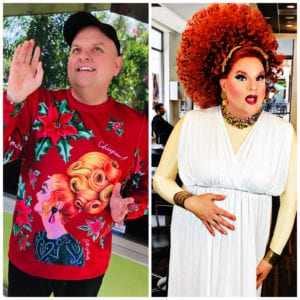 On Friday, March 13, actor Matthew McGee arrived at American Stage around 4:30 for one last rehearsal before that night’s world premiere of The People Downstairs, a comedy by Bay area playwright Natalie Symons. The Wednesday night dress rehearsal and Thursday night preview, sold out, had gone over extremely well. The four-person cast, plus Symons and director Chris Crawford, were amped for the 8 p.m. curtain.

Then American Stage CEO Stephanie Gularte showed up with some news.

The show mustn’t go on.

The four-week run had been indefinitely postponed. The preview show was the last time McGee performed for an audience. “We were really sad about it,” McGee said by phone recently. “but we were devastated for Natalie. A world-premiere production? Canceled on opening night?”

McGee is a versatile entertainer — an actor, singer and comedian who also performs in drag as Ms. McGee. He’s part of a two-person cabaret called The Scott & Patti Show. McGee plays Patti, mother to Scott, whose real last name is Daniel. The tandem sings campy versions of pop tunes from throughout the decades, interspersed with witty banter. They’ve played The Palladium, Tampa Theater, American Stage and as far away as North Carolina.

“I created the show to keep both me and Scott — he’s also an actor and a wig designer — working when our acting contracts dipped,” he says.

McGee’s Bay area theater resume is impressive. Among many roles, he has played Max Bialystock in The Producers and Edna Turnblad in Hairspray for American Stage in the Park, Auntie Mame in Mame at freeFall Theatre, and also for freeFall, Pippin’s father and grandmother in a production of Pippin. He’s also a long-time cast member of a Disney World show called The Royal Majesty Makers, for which he plays the bumbling oaf Sir Sterling.

With his performance work on indefinite hold, McGee has maintained a financial lifeline at freeFall, where he continues his job doing marketing and outreach. “I’m thankfully still on the payroll,” he says. “I actually have more to do ever. I’m working social media, letting patrons know that we’re still around and prepping for our summer show, letting them know about our Wednesday-night theater chats on Zoom.” (See details at the bottom of this page.)

McGee works from home, but once a week drives from Seminole Heights in Tampa to freeFall on Central Avenue in St. Pete to water the plants and check the mail. His live-in partner, George Ebanks, works as an oncology nurse. “I can’t stress enough that I know many other people are in much worse situations,” he says.

While his financial safety net is fairly solid, McGee’s life during pandemic time has been no Sunday in the Park With George. “At first, I was not really sleeping,” he says. “I was in a state of, ‘Oh Gosh! Suddenly, because of a virus, we’re not able to come together in the same room. That’s what theater is.’” 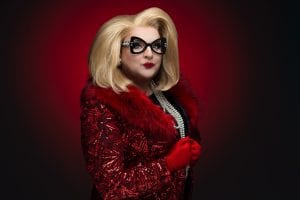 He had to contend with another issue as well. “I’ve always been something of a hypochondriac,” he says. “And this situation has really amped that up. I had to go out and get a few things, and I had on safety glasses, a mask and gloves. All suited up. Early on I was freaking out every single day. I wake up thankful I live with a nurse. He gives me some perspective.”

Rather than systematically working on his art in private, McGee is using the shutdown time for some valuable rest and repair. He’d been working a grueling schedule that included his daytime administrative work for freeFall, a regular slate of acting gigs at night, periodic Scott & Patti shows and his shifts at Disney. “I was burning up the highway, and right around the New Year I started thinking about doing less,” he says. “I even considered cutting way back on acting. Now I realize how foolish an idea it was that I would stop doing it. This shows me how much more I appreciate it.”

McGee has revamped his lifestyle. Whereas he used to grab a lot of fast food on the go, he now eats exclusively, and healthily, at home. He exercises regularly — when he’s not binge-watching Swamp People. Instead of running scales with his crystalline tenor voice, he’s using the down time to rest it, although he does tend to break out in song while doing housework. He’s been working through his trove of drag costumes and jewelry, organizing, cleaning, polishing, winnowing out some old stuff. He’s reading plays, which he was previously too busy to do.

“Being at home, cooking, cleaning, walking the dog — those were things I had not been doing too much of,” McGee says. “Being at home with George on weekend nights. That rarely used to happen.”

McGee knows that enjoying his R&R and domesticity has a limited shelf life. The acting bug is bound to bite soon enough. He frets about what the Tampa Bay theater and performing arts scenes are going to look like post-COVID-19, and wonders if all the companies will survive.

McGee, 44 — a Georgia native who studied acting and theater management at Valdosta State — is doing his best to take it week to week. “I can’t operate on the idea that this is never going to end,” he says with a touch of yearning. “It is going to end. When I’m at my most optimistic, I see a real resurgence in people coming out for local arts, people coming out of the woodwork. Maybe it will become even more of a thing people want to do, and we’ll see a resurgence in attendance.”

At the time of our interview on Thursday, April 9 McGee had not done any online performances. “At this point, I don’t need to put up a tip jar,” he says. McGee has, however, made it known to a number of arts organizations that he’ll gladly participate in virtual fundraising performances.

And here’s a sliver of silver lining — something to look forward to. American Stage has rescheduled the world premiere of The People Downstairs for September.

Matthew McGee will perform as part of the Equality Florida Gala, an all-day virtual event, April 26. His portion is scheduled for around 5:30 pm.

Keep up with freeFall Theatre at freefalltheatre.com 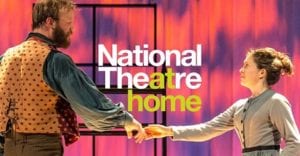 “Catch the National Theatre at Home’s incredible production of JANE EYRE this evening for free by following this link:

“Then you can join freeFall Artistic Director Eric Davis and members of the freeFall staff for a Zoom discussion of the production on Wednesday night at 6 pm.

If you do not already have the Zoom application, you will be prompted to download
and install it. You will need the following credentials to participate: