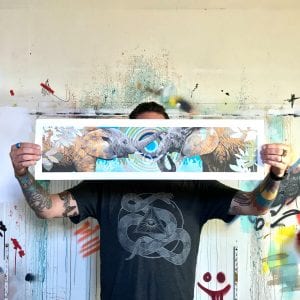 Fontana’s work has been featured in Hi-Fructose and Juxtapoz and exhibited worldwide. Fontana will tackle his massive wall with fellow Portland artist Plastic Birdie (Jeremy Nichols).

Also in partnership with PangeaSeed Foundation’s Sea Walls: Artists for Oceans, St. Petersburg’s Cecilia Lueza Art Projects is designing a ground mural and guiding volunteers in its creation at North Shore Pier, to highlight the importance of preserving our diverse marine ecosystem. 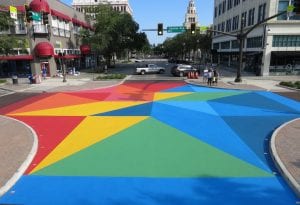 Find out more
about Sea Walls:
Artists for Oceans
at seawalls.org 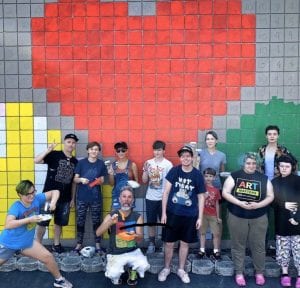 On view at 2451 Central Avenue just in time for Come Out St Pete the first week of October, Jay and his team created a large-scale mural that celebrates diversity in our community.

Jay’s fine art is created using LEGO® toy building bricks, and his mural is inspired by this colorful artistic medium.

You can watch a video of WTSP
talking with Jay Hoff and his team
as Pride & Love is being painted.

You can read a full story
about this mural at Watermark

Shining Bright in the Deuces Live District, SHINE will partner with the Boys & Girls Club to produce a mural on a wall of the historic Quonset hut-style Royal Theater.

Designed in collaboration with the surrounding community, artist Brian McAlister and students from the Gibbs High Mural Club will paint alongside participants of the Boys & Girls Club program. 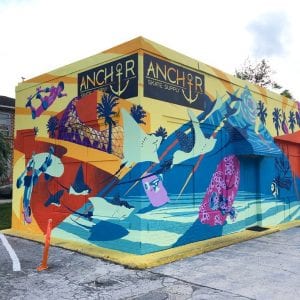 SHINE Mural Fest –
An Art Exhibition All Over St Pete 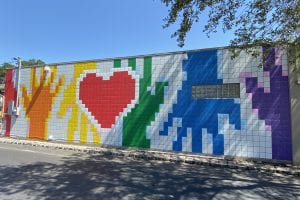 With the exponential growth of the urban areas of St. Petersburg and Tampa, comes the growth of the art scene. Though St. Pete’s scene has been thriving for many years, some incomes and communities may not get to enjoy it as often as they would like. (Museum free days are great but the days are specific and very crowded.)

Murals are the cheapest — i.e. free and most accessible way to enjoy art. The Shine Mural Fest  celebrates this form of public art starting Thursday, October 18. Their website specifically states that SHINE is an art project “… that illuminates the power of art in public spaces by revitalizing areas, inspiring dialogue and uniting our community — while cultivating new standards of artistic excellence and reflecting St. Petersburg’s creative and vibrant spirit.”

The fifth annual festival includes 16 professional artists, some local and some from as far away as Australia and Germany.

Murals didn’t just pop out of latte foam when millennials grew up and started developing downtowns. Murals have been around since the Stone Age and have had moments of resurgence since — like the New York subway graffiti murals in the 1980s. For your next movie night, watch the movie Beat Street to delve into that era.

The St. Petersburg Arts Alliance took over managing SHINE last year. “The St. Petersburg Arts Alliance has been involved with SHINE since year one. Initially, as the fiscal sponsor but last year SPAA was able to hire someone to help coordinate the festival year round,” said SHINE coordinator Jenee Priebe during a recent chat with the Arts Coast Journal. 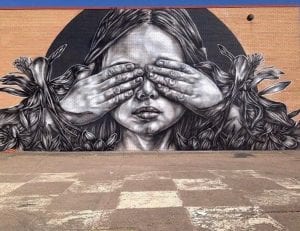 “Prior to 2018, the festival was run entirely by volunteers. I was fortunate enough to be hired for the Coordinator position last year.”

This year’s mural locations range from sides of restaurants, to gyms, to breweries. In addition, there are “Bright Spots” done as community projects involving local nonprofits. This year’s groups include the Boys & Girls Club and Come Out St. Pete, a group formed in 2017 to help grow community awareness and acceptance of all sexual orientations and gender identities.

Murals are a way to enjoy many types of art and styles that you may not have been exposed to. As the locations range, so do the artists.

“The most important thing is diversity of styles,” explains Priebe. “We’re always looking to expand our outdoor gallery in a way that feels representative of all artistic styles.”

Quite different they are — there’s the black and white human by Mexico’s Paola Delfin, Jamaica’s Taj Tenfold‘s colorful and fantastical pieces and England’s Shok 1 “X-ray Art.”

Included in the range of artists are some from the Bay area, including 2013 Gasparilla Festival of Arts Emerging Artist of the Year, Tampa’s Princess Smith. Smith delves into themes of racism, slavery and sexism in her emotional art. 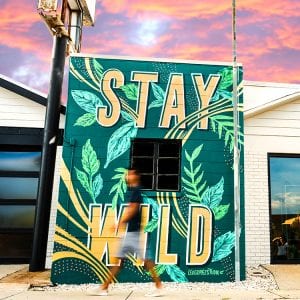 Local muralist and hand-letterer Leo Gomez is participating for the first time, painting at the Ice House of St. Petersburg. You may recognize his bold style from the many businesses he has, including the botanical Stay Wild mural on Wild Roots garden center.

“I started exploring with lettering as a very young artist,” Gomez explains, “I was very interested in graffiti back then and spent my teenage years drawing letterforms in many different styles.”

That obsession evolved into mural work.

“After executing several large-scale lettering projects I was ready to get out of my comfort zone and paint something much bigger than what I was used to,” Gomez says.

Though usually hired by a client to do something very specific for a business, Gomez gets full creative control on his SHINE piece.

“I’m hoping to show cultural and city pride and share more of those good St. Pete vibes we all love,” he adds.

Whatever the style of the artist, they get free rein of the theme of their mural.

“The artists have full creative freedom during SHINE. The only exception is no nudity or anything overtly offensive,” Priebe explains. “We don’t ask for design renderings either, so it’s always a fun surprise to see what they create!”

All of the artists will start production Thursday and continue until the Grand Finale at 2 p.m. on Saturday, October 26. There are many events in between, including Burn: Morean Street Party at the Morean Arts Center at 7 p.m. on October 19 and the artists Doug Cunningham and Jason Noto, aka Morning Breath, joining in on a Drink and Draw night at Green Bench Brewery at 7 p.m. Tuesday, October 22.

If you can’t make the events, good news for you, the murals are public. You will be able to enjoy the art, at your own time and on your own schedule, for free.

“Public art is like a gust of fresh air. Nothing better than turning on a corner and seeing an epic mural — that’s an instant smile and mood boost,” Gomez said. “It’s definitely amazing to see the huge positive change public art can bring to a city.”

If you can’t get there in person, you can
explore the St Pete Arts Alliance’s Virtual Mural Tour