Theater director, instructor and actor Dee O’Brien has made it her mission to keep the Bard alive in community theater and accessible to a modern audience by way of her local group of players, Shakespeareance. She has presented full-length productions like Twelfth Night at the Tarpon Springs Performing Arts Center in addition to showcases she calls Shakespeare’s Greatest Hits.

“They have given many months to this endeavor — some of them are learning Shakespeare’s language for the first time,” O’Brien effused with pride talking about her cast.  “Their dedication to this project is inspirational, and I will be forever grateful.”

According to O’Brien, this is Shakespeare like you have never seen before. Actors of all backgrounds will perform scenes from Shakespeare’s most well-known works, including Henry V, A Midsummer Night’s Dream, Romeo and Juliet, Macbeth, The Merry Wives of Windsor and As You Like It.

“Each scene. . . was treated as its own play, an entity unto itself,” O’Brien explains. “Costumes and music correspond with the feeling of each scene and reflect no specific time period. Songs by The Doors, Queen, Mozart, Sinead O’Connor, ABBA and many others have words and music related to the theme and mood.”

The show even includes a song by indie rock band TV on the Radio, Dreams, making O’Brien of the few women in the world her age to have heard of that band. “I was turned onto them by one of my former students,” she explains.

O’Brien somehow designs and makes all the costumes herself with elegance and a healthy dose of Puck-like mischief and humor. Some are Steampunk style and others have a more classic design, with twists from other time periods. “Expect fascinating costumes from multiple eras,” she says.

Shakespeare’s Greatest Hits takes place over two weekends. The first curation is a show this weekend which O’Brien calls Slings and Arrows. Next week’s will be presented with the theme, Fits and Starts.

Why the titles Slings and Arrows and Fits and Starts? “I think for me it’s the whole rehearsal process,” O’Brien shares. “You know, the good and the bad and trying to get there after fitful starts and many, many different slings and arrows.”

Slings and Arrows,  as you may recall comes from from a line in the “To be or not to be” speech from Hamlet: “To be or not to be, that is the question. Whether ‘tis nobler in the mind to suffer the slings and arrows of outrageous fortune or to take arms against a sea of trouble and by opposing end them.”

In Macbeth, Lady Macbeth uses the phrase “flaws and starts…”  with flaws meaning sudden fits.  In Cymbeline, Pisanio says, “… the fits and stirs could best express how slow his soul sailed.”

O’Brien hosted a workshop at the Heritage Museum in Tarpon Springs on October 1.  Prominent visual artist Carol Mickett performed the famous monologue  “All the World’s A Stage” from As You Like It for Tarpon residents and a group of nearby high schoolers. Mickett’s partner/husband, Robert Stackhouse performed his first bit roles onstage with Shakespeareance, too.

Mickett and Stackhouse moved to Tarpon Springs in the past couple of years and didn’t have the social circle they had in St. Pete. Meeting new, like-minded friends is often a challenge, but O’Brien and her significant other, Graham Jones, who plays King Lear and other roles in the show, met through a mutual friend and immediately hit it off. Coincidentally, Stackhouse’s mother went to the same high school as O’Brien’s father in the New Rochelle area of upstate New York.

O’Brien discusses the roles played by Jones and Bruce Miller. Both appeared in her recent production of Twelfth Night in Tarpon Springs. Photo by Julie Garisto

“You’re my Hermione!” Mickett said, recounting some of the first words O’Brien shouted to her on their first meeting.

Mickett indeed brought Hermione to life with regal grace in a lovely red gown with and bustier at the Tarpon Springs workshop. Along with a successful career as a philosophy professor and visual artist, Mickett did some on-camera work and theater in her younger years. Stackhouse learned theater tech in college and high school. Working on the sets and gels inspired his use of space and light in his installations. “Those experiences added a glimmer to my work,” he shares.

O’Brien brought out costumes that she said were initially stitched by nuns at a prep school, but those wouldn’t be the ones she settled on. Instead, she would take on the challenge of making new costumes inspired by the actors and scenes they’re performing. A mom of a former student visited from upstate New York just to help her. 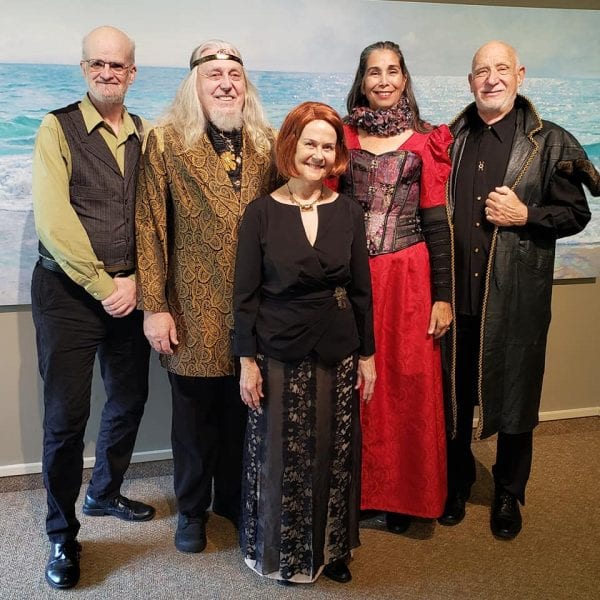 O’Brien, just a little more than 70, bounded about the stage like a 21-year-old with a long floral vest that’s part hippy, part Olde English. She kept the language rated PG for the teens in the audience, something she was used to from teaching Shakespeare to middle school and high schoolers for three decades, but in everyday conversation she’s sassier.

O’Brien shared that graphic images would be projected over the scenes, designed by the “kids” in her show — actually in their 20s — Nathan Atttard and Illana Fotopoulos.

O’Brien’s Wolverhampton-born partner Jones shared with the audience and students that he learned Shakespeare attending shows at the Globe in England, but would go about his life in a “boring” job in technology, most recently as a software designer. He told the kids that playing Shakespeare and his girlfriend director have added fun to his life, that there’s always something new to discover in the language of the Bard — and that the themes of love, betrayal and greed never go out of style.

“Look at me — I have long hair now!” pointing to his white mane. “I used to be like everyone else. Dee turned me into a hippy!”

Talking on the phone with Graham after the workshop, Jones shared what makes O’Brien so joyful to live and work with:

“She’s absolutely the nicest person I know, the most generous person that I’ve ever met in my entire life. And I don’t mean by, you know, people who give you money or anything like that. She’s generous with her time, with her ideas, with her affection, with herself and to find someone like that as a director is — well, for me — it’s unique. I’ve never met anybody else who can fuse to a cast the way that she cares and bring them along into her vision of what the show is supposed to be. Working with her is, it’s an amazing experience. And I have learned a lot.”