This first image is Lady Macbeth Crowning Herself, stained glass by Albert Gerlach, created for the Elsinore Theater in Portland, Oregon in the 20th century. 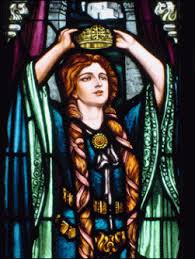 This is an image that guided the path of Lady Macbeth’s journey for me as I wrote the play, Thrice To Mine.  I returned to look at it often and the image is reflected in the costuming for the production.

The second image is of Hawthornden Castle in Midlothian, Scotland. It is where I lived as an artist in residence when I wrote Thrice To Mine.

It was built in the late 14th century and is set on a sheer cliff over the River Esk.  You can see the ruins of a tower on the right side of this photo. There is a pit prison beneath the tower, which we writers were allowed to tour. There are a number of man-made caves in the cliffs beneath the castle. 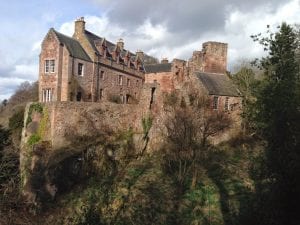 One cave serves as a doocot (“dove-cot”, or housing for pigeons and doves) with 370 compartments. There is a tradition that King Robert The Bruce once found shelter in the caves underneath it. The poet Sir William Drummond was born here, and later extended the castle.

The ghosts of the castle spoke often in the wind and the creaking of the old walls and very much informed the feel of the play. The photo was taken by me from the cliff trail surrounding the castle and it sits on my desk as well as being the screensaver on my laptop.

I am currently in NY to begin rehearsals for the premiere of Thrice To Mine in August.

Roxanne Fay is an actor and playwright.
Find out more at roxannefay.com