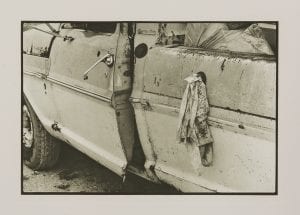 Encounters with Rauschenberg exhibitions are like visiting grandmother’s house when we were kids. And we visited every Sunday after mass. Each time there were new experiences. Discovering a never before entered room, smelling the blooms in one of the gardens, playing in fountains and fields on the 50 acres that her house occupied…

Such is the breadth, width and depth of Rauschenberg’s creative output, that it’s safe to bet, somewhere on this planet, a curation from his many-faceted works is being installed.

A Rauschenberg show is in fact now at The Tampa Museum of Art. Robert Rauschenberg America Mix-16 is a series of 16 photogravure prints, selected pictures from his 1979 road trip through parts of the United States. The exhibition includes supporting materials on photogravure, and samples from another trip through China. 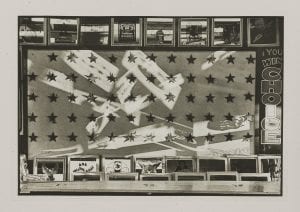 In 1983, Deli Sacilotto, a master printer in New York (later at GraphicStudio in Tampa), collaborated with Rauschenberg, producing a portfolio of 16 photogravure prints on deckled edge paper in an edition of 40, and named it America Mix-16. Showing in TMA’s exhibition is edition 7, a gift to The Tampa Museum of Art from Gail and Arnold Levine, longtime Tampa residents, art collectors and generous patrons.

In the panel introducing the show is a quote of Rauschenberg speaking on photography: “Photography is like diamond cutting. If you miss, you miss… you wait until life is in the frame, then you have permission to click. I like the adventure of waiting until the whole frame is full.”

Oddly, the images in the frames seem to have long traveled past a full life. A rusted vehicle with door ajar and a rag stuffed where a gas cap should be; haphazardly arranged pictures in a dusty storefront; wilted flowers stuck into a chicken wire fence; a neon open sign that is not glowing… They are scenes of any number of places and corners gathered on any American roadside in any American town… except maybe the two gators lazing under the palm frond’s shade. 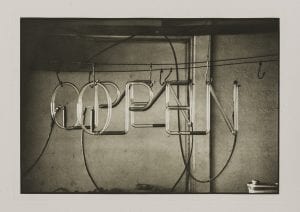 This was way before omnipresent cellphone cameras, which cost nothing of anything to click away, and before people thought the mundane of every day contained any significant content. Really, who considers such scenes? Who pays heed to a Windsor chair with broken backrest sitting next to mop buckets next to a child’s high chair and a lawnmower pushed up the side of an industrial building, not unlike the stuff one might see piled curbside waiting for the trash collector.

Or perhaps, in some cases, a secret longing lies, waiting for someone to come and acknowledge their existence. There is mystery in accumulations of time and dust. If you come just right, the shapes and shadows can tell a fascinating tale of how they came to be.

Luckily for that chair, and that rusty vehicle, and all that was in the path of that road trip… and for us, Robert Rauschenberg came along. 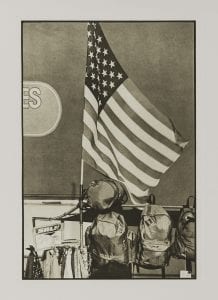 America Mix-16 interestingly dovetails to another exhibition in the Museum’s adjoining galleries: Tableau & Transformation. This has 50 photographs from 22 artists drawn primarily from TMA’s own collection. Whereas the American tableau that Rauschenberg recorded evolved(devolved?) organically, the scenes in Tableau & Transformation were invented in the artists’ studios.

Either way, all of their worlds, found or made up, reveal a reality we encounter every day, sometimes happily, absent-mindedly, sometimes hoping to avoid.

Find out more at
tampamuseum.org/current-exhibitions.