Something Borrowed, Something New

Ali Shaheed Muhammad and Adrian Younge,
raised on hip-hop, form the core of The Midnight Hour,
a retro-soul ensemble with a contemporary twist

Perhaps it was fated that they would meet, connect artistically and form a thriving collaboration. Ali Shaheed Muhammad, 49, born and raised in Queens, New York, an original DJ/producer of the hip-hop group A Tribe Called Quest. Adrian Younge, 40, from Los Angeles, a polymath solo artist, composer, producer (from Ghostface Killah to The Delfonics) and multi-instrumentalist. Both were children of hip-hop, and both took the road less taken.

Together, they form the nucleus of The Midnight Hour, a Los Angeles-based 10-piece (sometimes larger, sometimes smaller) ensemble that will perform at The Palladium on Wednesday, September 11. The band is made up of a rhythm section, horns, strings and singers. They make capacious, seductive music that owes more to the “symphonic soul” of early-’70s Curtis Mayfield, Isaac Hayes, Marvin Gaye and others than to anything resembling rap. You can also hear echoes of neo-Blaxploitation film music. Younge and Shaheed Muhammad co-composed the score for the Netflix series Luke Cage.

Unlike most other children of hip-hop, the partners play instruments: Younge primarily keyboards (with a penchant for Fender Rhodes) and Shaheed Muhammad mostly bass guitar. They started as DJs and digital musicmakers, and then became curious about the interactivity that players shared. Shaheed Muhammad, who says he has nothing against digital and still employs it, nevertheless feels, “It’s liberating not to have a computer generate the sound. It feels like it makes more of a human connection.”

For his part, Younge is a devotee of analog. “As a kid, I listened to hip hop with sampling, and that turned me on to the original pieces of music,” he says. “The originals blew me away more than the derivative versions.” (He cites Mayfield’s 1972 Superfly album as a foundational influence.)

Younge built a bespoke studio in Northeast L.A., Linear Labs, where artists record on tape and employ a bevy of vintage analog gear. The first line of copy on its website reads, “A studio defined by Adrian Younge’s golden era of sound (‘68-’73).

It’s where The Midnight Hour cut its self-titled 2018 debut, a 20-track opus that blends the partners’ love of retro-soul and silky jazz with more than a touch of the now. Case in point: a remake of Luther Vandross’s “So Amazing” with a new rhythm track, transforming it from a bedroom ballad to a gently funky bossa nova. The album features a phalanx of guest singers, including CeeLo Green, Raphael Sadiq, Bilal, Laetitia Sadier (of Stereolab), Loren Oden and teenaged Angela Muñoz. The latter two are the vocalists for The Midnight Hour touring band. 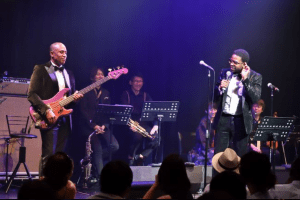 Younge and Shaheed Muhammad met in very modern fashion. In 2013, “I received a tweet from Ali saying he liked the music I create,” Younge recalls. “I responded pretty much like, ‘I like your music better than you like mine.’”

After linking up in New York, the duo co-produced There is Only Now, a 2013 album by Oakland hip-hop group Souls of Mischief. That led to a collaboration in Linear Labs that would ultimately result in The Midnight Hour. The tandem started out casually, making music together for the sheer joy of it.

“We’d each write stuff on our own and bring it to the studio and expand on it, or we just meet there and work together,” Shaheed Muhammad says. “[The collaboration] is really easy. For me, throughout my career, it’s been difficult to find people I like to work with, because they don’t have the same references. A lot of artists don’t go further back than 10, 15 years. Adrian is obviously an exception. He understands the history and also that there are new ways to continue the conversation.”

“It didn’t take long before we realized we were onto something,” Younge recalls of the loose-knit sessions. 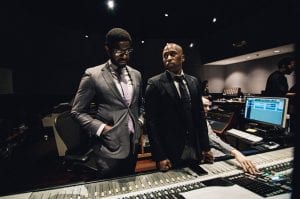 The partners had to set aside their project to create the Luke Cage score, which required meeting tight deadlines, then exhaled and reconvened to bring The Midnight Hour to fruition.

They were not in a hurry. And there was the matter of logistics. Other than CeeLo Green (and Vandross), all guest vocalists showed up at Linear Labs and recorded in real time. The Midnight Hour is reflective of its title in both its homage to the 1966 Wilson Pickett hit “In the Midnight Hour” and the music’s languid, late-night aura.

Younge says the band injects more dynamics into its live set. While still reliant on mid-tempo smolder, the ensemble also breaks into loud, rambunctious passages. “The show is more of a rollercoaster ride,” Younge says.

Shaheed Muhammad adds: “As someone who’s been making music for 30 years and still DJs, I know how to rock a party.”