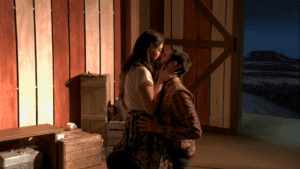 Remember, for just a moment, what it was like to dress up, to take a physical ticket out of your purse or pocket, to indulge in an overpriced drink and sit in velvet seats with strangers as the lights dim.

It may seem like a distant reality, but it was something to take solace in after a day at work, or a means of wallowing in the relaxation of a weekend. To sit in silence and watch not only the play or musical before you, but the people interacting around you was the real experience. Just watching as someone searches the sea of seats for that one person, then taking witness in their realization when they finally find them. Even the simple annoyance of moving your legs as someone comes down the aisle to their seat in the middle becomes dissonant compared to the solemn stillness that fills the day now.

What I would give to hear a cellphone ring during a performance now.

What do you do, without art? Now in month nine of the pandemic, the hasty and deafening shutdown of theatres in March seems far away.

But the repercussions that theatres are facing are insurmountable. How could they even start to tackle such a mammoth task as delivering performance, art, song and commentary from a safe distance? If Zoom meetings serve as an example of the technical difficulties that arise when more than one person tries to talk, virtual performances seem herculean.

Theatres and art, however, have proved historically unstoppable in the face of danger. No matter what plague or pandemic is thrown their way, art thrives and bounces back with vigor and grace, just as any actor would onstage.

The theatres you know and love have been working tirelessly through Zoom meetings and email chains to adjust and pivot their accommodations for a changing audience. 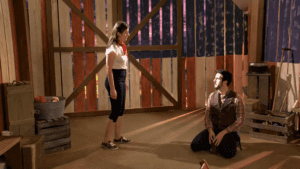 Plain and simple, theatres in Tampa Bay just look a little different. Whether that be a streamed performance with actors in their homes on Zoom, a Facebook Live event, reduced house size or freeFall Theatre‘s drive-in performances, the way they’re going about it oozes ingenuity and care for the audience member first. You look to Jobsite Theater housed at the Straz Center in Tampa as they shift their space at the Jaeb Theater from 320 seats to 100 for socially distant enjoyment. This is a slice of normalcy that can be touched as an audience member.

What also grabs the attention of theatre-hungry audiences is the virtual shift being seen across the county.

Virtual performances are a natural adaptation when it comes to phasing performances back to what we remember. No, we don’t get the atmosphere, but we get the immersion that the human soul craves. Theatre classes at the University of South Florida shifted hard and quick after this year’s Spring Break to distance learning by hosting classes through Zoom.

While jarring and different at first, the accessibility of performances to anyone with a smartphone or computer was eye-opening. Can we now reach more people? Isn’t this the question that Artistic Directors have been asking for years?

American Stage has incorporated virtual performances into their 2020-2021 season with grace, as always looking to their audiences first. Nosotros La Gente (We the People) was streamed live starting on December 2, wrapping their live performances on December 6. As another way of opening accessibility and limiting contact and exposure, American Stage is streaming the recorded performance from their website through December 20. 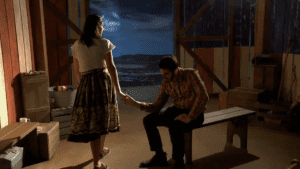 The two actors, Diana Garle and Daniel Llaca, were able to limit exposure onstage during this project since they are partners and already live in their own little quarantine bubble together. The casting selection of American Stage on this project was smart from the start, leading to a strong finish to the year and a promising transition to the next.

Now in a new phase of theatre, Tampa Bay has found a way to transcend borders, states and time zones. American Stage links creative arms across the country by commissioning Jerry Montoya for their Digital Theatre Series and partnering with the Aurora Theatre Company to reach audiences in California.

From one sunny state to another, theatre has now found a way to shine no matter what. As part of American Stage’s Digital Theatre Series, we see their virtual staging of “Three plays in three months, created for digital theatre accessible to anyone, anywhere.”

As the finale of this series, Nosotros La Gente by Jerry Montoya invigorates the theatre scene – even if it’s all online. The third in the series, its predecessors are Letters to Kamala and Kate: The Unexamined Life of Katherine Hepburn.

It is not abnormal to see a theatre commission a playwright to write for their season but to see it in our backyard is encouraging and exciting for audience members and hopeful writers alike. 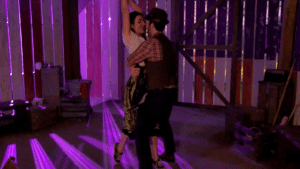 Jerry Montoya is a professional playwright, director and theatre producer who serves as the executive producer at B Street Theatre in Sacramento, California. Jerry has worn many hats through 17 years with the theatre, serving as director, writer, actor, designer and stage manager. He’s written many plays for B Street Theatre’s Family Series, a staple in their season, as well as a handful of full-length plays geared more towards adults.

Nosotros La Gente is his most recent work, commissioned by American Stage for their Digital Theatre Series, who are hosting its world premiere. Montoya served as both playwright and director for this project. “This is a story of a family that has tilled the fields of this country and fought its wars. It’s a story of faith, family, hope and love. This is a story of America,” told by actors of fervor in a time of national crisis. We can’t help but engage – even through a screen.

What must be addressed first and foremost is the amazing shift that we have seen in Tampa Bay theatres. This is a hard time for everyone, but we are working together to get through it for a reason.

American Stage’s Artistic Director Stephanie Gularte said it best, “It was essential that we craft a season that allows us to remain connected to our community at a time when we all deeply need the meaningful human connection that powerful storytelling can provide, while at the same time preparing for ongoing flexibility in an evolving public health landscape.”

Take a breath and remember that you can still be drawn into a world that is separate from your own – all you need is to turn your computer on.