Readers Theatre
Theatre of the Voice 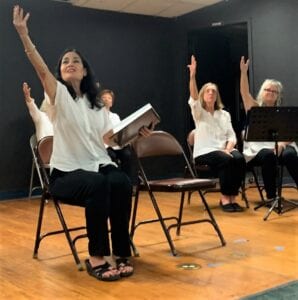 Linda Mastry, script in hand, joins fellow players of the Readers Theater in performing Change at the Sunshine Senior Center in St. Petersburg.

The piece is called Change. Its creation was a unique group effort, the result of a pilot program launched by SAGES Theater with St. Pete Parks & Rec’s Sunshine Senior Center called Readers Theater.

What is Readers Theater? It is “theater of the voice,” Kelly McGuire, SAGES board secretary, told the audience gathered in the center’s first-floor auditorium for the first production of Change on June 24. It’s not about staging, explains McGuire, who directed the production. There are no props, no costumes, no lighting.

Nine adult performers, one man and eight women, clad in black slacks and white shirts, holding scripts in hand, stepped onto the stage and took turns reciting (and in one case singing) a montage of pieces on the subject of change. Max Roberts narrated. “We will go on a journey,” he promised.

Throughout the hour-long performance Lisa Moore’s recitation of the lyrics of Bob Dylan’s The Times They Are a Changin’ and Wanda Stuart’s singing of Sam Cooke’s Change is Gonna Come provided a counterpoint to scenes from Denying Gravity. That play, written by Linda Goldman who founded SAGES, is about a woman named Claire (played by Linda Mastry) who fell and landed in the hospital but now is resisting the changes suggested by a physical therapist (played by Letty Mendoza) who has come to help her. 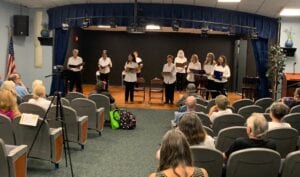 Also sprinkled throughout the hour were dramatic readings of quotes, poems and personal stories about how we accept or struggle with change — including a Greek-like chorus commenting on the stubbornness of the change-resisting Claire — voiced (either in unison or solo) by the troupe, which also included Ada Capellan, Betty Medernach, Linda Palmer and the Sunshine Center’s program director Carole Ware.

The tradition of Readers Theater first began as a strategy to help children develop reading fluency. By having children conduct oral readings with no memorization, they gained confidence in their reading skills. More recently the concept has been re-imagined for senior groups. The loose — and collaborative — format is well suited for showcasing (and encouraging) creativity and self-expression among seniors. 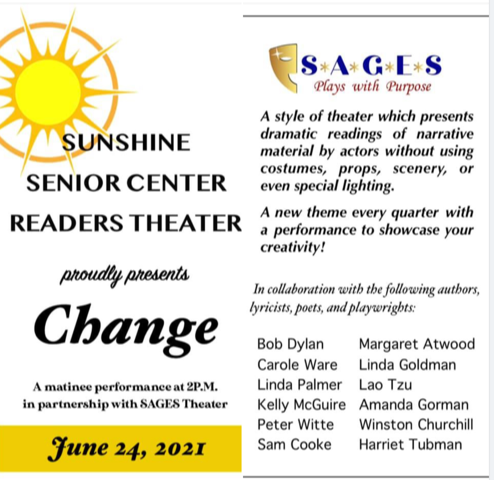 From the playbill of the Sunshine Senior Center Readers Theater production of Change. The work was a collaborative effort that was subject to, well, change – right up until the last minute. Missing from the collaboration credits, for example, were the last-minute additions of material from country music singer Jimmy Dean and motivational author Robin Sharma while in the actual production, Margaret Atwood didn’t make the final cut.

The Sunshine Senior Center Readers Theater was launched last March. McGuire and another SAGES volunteer, Norma Caltagirone had researched the topic of change and pulled together several sample pieces for the group to read and make selections. Session attendees were encouraged to write their own pieces and share other works about change that they loved — favorite quotations, poems, story excerpts, song lyrics, article excerpts, titles of books, scripts, films, songs. . . well, “pretty much anything!” as Christine Hamacher, executive director of SAGES Theater, put it in an email sent out to those who signed up.

“The first three sessions of Readers Theater were full of sample readings, exercises with quotes, and improv activities to get creative juices flowing and inspire discussion,” says Hamacher. “Each participant was encouraged to experiment with their ‘voice’ and read pieces in different tones or as different characters.”

For the final script, the group chose materials, both found and original, supplied by Ware, Goldman, McQuire and Palmer, including the words of philosopher Lao Tzu, African-American poet Amanda Gorman, British prime minister Winston Churchill, political activist Harriet Tubman, country singer Jimmy Dean and motivational writer Robin Sharma – and an adaptation of a magazine piece called “They Were” by Peter Witte which lyrically sums up the changes in the life of a married couple.

You can watch the recent performance of Change here
. . . 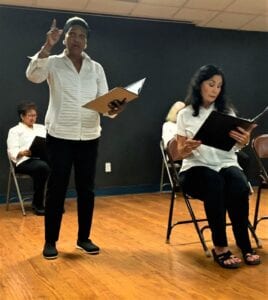 Wanda Stuart singing Sam Cooke’s “Change is Gonna Come,” in Change. Linda Mastry, who plays Claire in the scenes from Denying Gravity in the production, is seated at right.

The next round of Readers Theater, with the theme of Aging and Ageism, begins July 22. Participants will meet twice a month from 12:30-2 on the second and fourth Thursdays of the month through October.

A performance — the seventh session — is tentatively set for October 28. “Anybody can sign up — no experience necessary,” says McGuire.

Like the format of the Readers Theater’s first production on change, the backbone for the next performance will be excerpts from another SAGES play, Phoney Baloney, a one-act about scammers who steal from seniors. (You can even report scams via the SAGES website, and help others avoid similar traps.)

McGuire says she most likely will include the scene about a younger romance scammer who woos a senior for her money and another scene about a credit card con who preys on a clueless older gentleman. Also, McGuire hopes to include the lyrics to Frank Sinatra’s It Was a Very Good Year, Paul McCartney’s When I’m 64 and Sunrise, Sunset from Fiddler on the Roof.