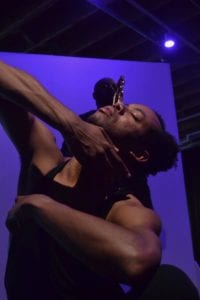 Alex Jones wants to know what it takes to get you to move.

Jones is Artist in Residence at The Studio@620 and the artistic director of projectALCHEMY. The company will present Jazz Theory this weekend in collaboration with jazz music icon, Jeremy Carter and his band.

This experiment between music and dance explores ritual, memory and the indescribable need a body feels on its journey to possession.

“There is a ritual that leads you to that moment of possession,” explains Jones, who is captivated by the blurred line between listening and physically experiencing jazz music. “What I’ve built for each of the dancers is the ritual of choreographed movement. I’m hoping that when it all mixes together with the music, it will take them to a state where they just can’t stop moving and get out of their bodies.”

projectALCHEMY dancer Fernando Chonqui steps into the open studio space where the company has been working on individual solos all morning. Tasked with manipulating Jones’ movement, each artist interprets a jazz classic that will be played during the Valentine’s Day weekend events.

Chonqui straightens an illusory tie, pulling at false sleeves. A sizzling box of air appears between two palms, he slides it over to reveal a shoulder coming out of a slip. His foot kicks and his body snaps to attention.

Chonqui circles his arms, eyes half closed, smelling something sweet inside the song, Stella by Starlight, and the saxophone’s scream. He becomes a burlesque dream as fingers turn to feathers, queering the legs in an outfit that continues to reveal itself with every turn. Another straightened collar, a swish of the skirt, an undulating knee. 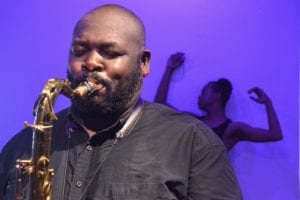 “I can feel things in my body that are familiar yet strange,” explains Chonqui, in regards to the process. “It has been interesting to put myself out there and think of music in this way. I am also interested in exhausting repetition and what it means for the movement to go internally.”

Dancer Carissa Bishop follows Chonqui, carving out the hard lines of a pinstripe suit and pencil mustache. Everything is syncopated as she steps into the shoes of Killer Joe. Even the box that was held in Chonqui’s feathered fingers turns to a black, leather wallet that holds loot to play the horses as her character playfully shoots fingers at an invisible gaggle of ladies.

“The second test for me is when I’m watching someone move or dance or listening to music or a combination of the two — and there’s a moment when all of those pieces make me want to get up and move,” says Jones. 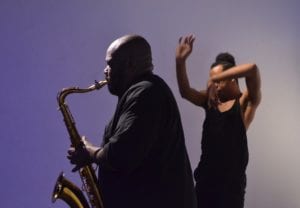 “I am wondering if I can do that with the audience and if it can happen without us making a gesture to you or inviting you.”

When Jones and Carter first met, they discussed how the songs that will comprise the evening hold powerful stories and lineage. The performance will take place at the height of Black History Month and features jazz staples My Funny Valentine, Killing Me Softly, Jitterbug Waltz.

Through the lens of jazz music, Jones considers the dancers to be part of the band, musicians in their own right playing at different extremes of their instruments. In an early improvisation with Carter, Jones recalls not being able to follow who was leading who as they riffed off one another.

“There are so many similarities between jazz and dance,” says Jones. “We want it to be more than a dance performance or an evening of jazz music. It is an event you want to be a part of.”

Find out more about projectALCHEMY here