Stephen Palladino: Be Right Back 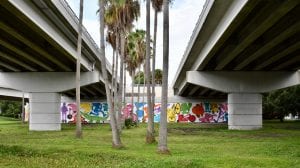 Partly shaded by an overpass and pocked with skyscraping queen palms, 192 linear feet of concrete wall are being meticulously transformed by the hands of artist Stephen Palladino. Bright patches of color dance across the outdoor canvas, awaiting his signature black outlines to give life to a parade of characters only Palladino could conjure.

Along the future home of the Pinellas County Trail extension, this cartoon carnival captures a host of transportation modes from men on hoverboards to skateboarding sharks and rollerblading flamingos. Hired for Pinellas County’s first mural project, Stephen’s design is as playful and inspiring as the artist himself.

It’s no small honor for Palm Harbor to be home to Palladino’s newest art piece. With an A-list roster of clients including Lady Gaga, Playboy, the NBA and Absolut Vodka, his creative talent has carried him all over the world.

But many people don’t know Stephen has a studio in Pinellas County. This massive wall at the Intersection of McMullen Booth Road and Tampa Road is a stone’s throw from where he grew up, an area that still influences his career. 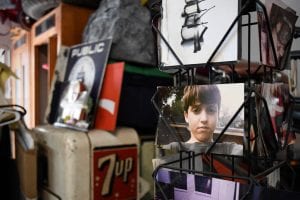 Stephen Palladino is best known for dark, gritty characters reminiscent of New York gangsters drawn in quick black lines. Dripping like engine oil down walls and canvases, there’s a somberness about his work that feels both nostalgic and original. 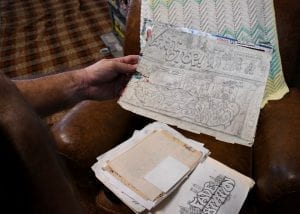 But finding his voice as an artist didn’t happen overnight. The social media highlights don’t do justice to the years of grinding and shameless hustle it’s taken to get to where he is today. Under the guidance of three mentors — his father, Stephen Palladino Sr, plucky artist Oscar Pumpin and a man affectionately known as Ever-Ready Eddie — Palladino’s upbringing in the arts reads like a MAD magazine comic strip.

By the time he was four, Stephen’s detailed Ninja Turtle sketches caught his parents’ eye and prompted them to say, “There must be an adult hidden in the house secretly drawing cartoons.” 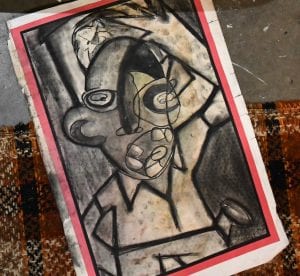 At 13, Stephen was hired for his first mural gig at Fade Station, a Largo barbershop. By that time, his parents had divorced and the young artist found himself splitting time between his mom’s home in Clearwater and his dad’s in New York City. Heavily influenced by the thriving graffiti and hip hop culture in the Bronx, he hand-painted the words “Fade Station” in wildstyle lettering with a New York subway scene in the background.

Every day after school Stephen would stop at the barbershop to paint, taking so long that the owner laughed when Stephen asked about payment. But that didn’t stop him. From airbrushing T-shirts to creating residential faux finishing, to entering sand sculpting competitions, no job was beneath him. Through the support of his mentors, he gradually learned how to develop his own style and sell his art for what it’s worth.

Oscar Pumpin taught Stephen about being fearless and confident, telling him to, “Be the one that does it, not just talks about it.” His eccentric father, who renovated their Clearwater home to look like a 1950s diner, taught Stephen to embrace the good with the bad. “Everybody wants to be positive, positive, positive, but you can’t avoid negative energy. Life is full of mind-soaring highs and soul-crushing lows. The good and the shitty. Embrace it, don’t try to avoid it.” 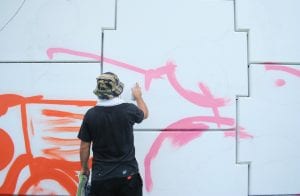 Standing in the shade of the overpass, Stephen pauses when asked what it means to him to be the first mural artist hired by Pinellas County. A lifetime of hazing from his Italian family has left him humble. His mentors left no room for entitlement or victimhood. He’s hustled for every dollar and doesn’t plan to stop. “It’s really special. When I was younger, I wanted so badly to see art here like I saw in the Bronx.  I was arrested at 13 for painting an alligator on an underpass right around the corner from here. And now I’m back doing this,” he says, smiling. It’s really special.”

You can visit Stephen Palladino’s new mural now, titled Be Right Back, at 300 East Lake Rd. S. in Palm Harbor, behind the Boot Ranch Shopping Plaza. 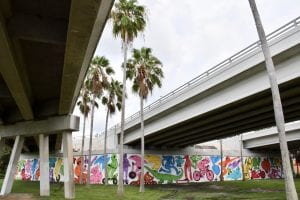