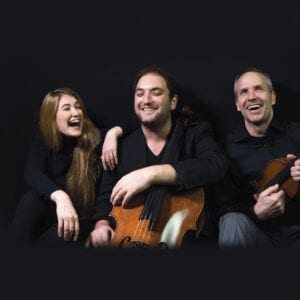 Zoom meetings are the new normal in business, so it’s only natural for the business of classical music to focus on the trend.

With COVID-19 limiting what orchestras and chamber groups can do live, many are offering streaming video as an option, knowing it’s better than not playing at all. The Palladium Theater has managed to salvage its coveted chamber music season through the camera lens – and some exceptional microphones – with a new series called Palladium Live!  A highlight features the Mile-End Trio at 8 p.m. Friday, March 5.

“We recorded it in December with four cameras and some really great sound,’’ says Paul Wilborn, the theater’s executive director. “So what you’ll see and hear is a really intimate concert, a really beautiful concert.’’

Listeners buy access to the video for $25 – much like they would purchase a ticket to a live performance – and watch it at home on whatever device they choose. Unlike being at the theater, however, patrons can enjoy the performance at any time over a 48-hour period.

“So if your mom calls, you can just put it on hold,’’ says Jeffrey Multer, violinist for the Mile-End Trio and concertmaster for The Florida Orchestra.

Multer, along with cellist Julian Schwarz and pianist Marika Bournaki, came up with some creative programming to make a video gig work. They also assumed some might be tuning in for the first time, so attention spans had to be considered.

“Rather than have a home audience sit through 45 minutes of the Archduke, I thought it would be better to show the great breadth and scope of all this great music in smaller portions,’’ Multer explains. “It’s sort of a best-loved hits of the repertoire.’’

But it’s more than the music itself. In many ways, the trio form is ideal for video streaming because of its intimacy. Whether live or on camera, the three instruments express a depth of emotion on a shoestring – the piano’s seven-octave range is an orchestra in itself, the violin spins arias with its soprano voice, and the cello’s earthy richness anchors the team.

Although Multer realized that streaming a concert can’t replace the real deal, he knows it has advantages. Rather than sitting in the back of the hall, a listener can enjoy an up-close camera angle and microphone, capturing a bead of sweat or a whispering pianissimo.

“It can work if it’s well produced and you have talented people in the booth,’’ Multer says of the production standards of Palladium Live! “And it will be more than just playing music – we’ll be doing a lot of talking and tuning, so it will be very casual.’’

If the COVID environment eases and things return to normal, the regular chamber music series of live concerts will return. Until then, Multer said, the alternative makes sense. “It’s a stop-gap measure right now, but we’re really happy to be doing this.’’

To watch the show, create an account on watch.mandolin.com using the email address used to purchase your tickets. If you have any issues accessing the show, email help@mandolin.com.