Free and open to the public is a workshop for a select group of USF multi-disciplinary students led by Cave and Faust themselves: Identity and the Art of Introduction. The workshop will take place at USF on October 9 from 10 am to 4 pm.

The workshop is on the power of collaboration and the critical role that understanding each other, as people and artists, plays among participants.

Cave has invited the public to drop by throughout the day, but please be sure to RSVP to irarsvp@usf.edu first to ensure there is enough space. 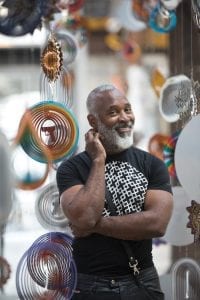 The artist talk and presentation of the sculpture at the Tampa International Airport on Tuesday, October 8 is already at capacity and no longer taking RSVPs. 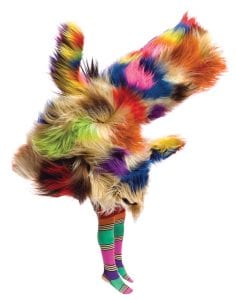 Nick Cave is coming to Tampa! No, not that Nick Cave. “Nick Cave artist,” as you have to Google him, is back in the Tampa Bay area — this time to debut another artistic collaboration with his frequent co-creator and personal partner, Bob Faust.

Well-known in the art world for his multi-sensory sound suits, Cave will be welcomed back to Tampa after a few years away — his last visit was for Heard, a live multi-disciplinary performance that teamed-up local dancers and musicians with Cave’s famous Soundsuits for a colorful and high-energy performance that included community members and artists, such as Michele Tuegel and Catherine Woods.

Woods describes the excitement backstage and the constant sounds generated by Cave’s creations. “Huge boxes everywhere, filled with colorful costumes. So much color and texture and the rustling of raffia.”

“I was in charge of assisting a ‘horse’ into costume – a two-person, two-part costume. The costumes are beautiful up-close. Big! I can see why the dancers need assistance.” 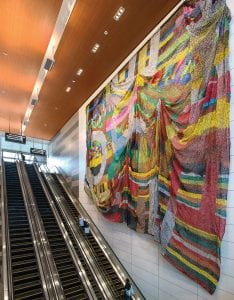 This time around, the event will be relatively intimate. Nick Cave and Bob Faust, along with newly-appointed USF president Steve Curall and Tampa International Airport CEO Joe Lopano, will be networking at a reception taking place on the third floor event space at the Tampa International Airport between terminals E and F, prior to the artist’s talk. After the talk, Cave and Faust will lead attendees to the installation site of Palimpsest, located inside the rental car center.

Nick Cave, widely and most well-known for said Soundsuits, is following the theories and concepts he uses in making the costume/art hybrid suits to a different conclusion — a hanging sculpture, Palimpsest, made completely of beads. 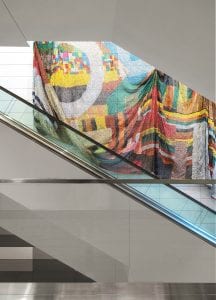 Just by looking at Palimpsest, you can imagine the tingling crescendo of sound of thousands of beads rolling over like a wave, or the Amèlie-grain-sack sensation if you were to (theoretically) run an arm over the sculpture.

A palimpsest is a surface that has been written or drawn on, then erased and reused again, leaving traces of the original lingering underneath the new — Cave says it’s close to the idea of “a graffiti-covered wall where each new image builds on top of earlier work but doesn’t totally replace it.”

Palimpsest is not Cave’s first sculpture of this nature, but its new permanent home in the Tampa International Airport means it will be accessible to millions of travelers and locals. The TIA’s plans to make art more accessible to the public is completely aligned with Cave’s idea of “the past as a foundation for a future.” The TIA offers public art tours and prides itself on its collection of art meant to serve as a reflection of the community.

Find out more about
artwork on display at TIA here