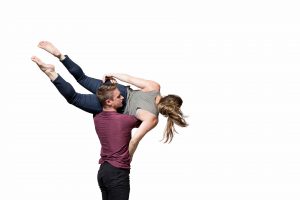 Colette Krogol and Matt Reeves formed Orange Grove Dance with dreamlike memories and childhood terrain in mind. The Florida-native artistic directors hail from Miami and Tallahassee respectively, and have cultivated a fruitful partnership for over a decade. Krogol and Reeves first met in the University of Florida’s BFA dance program in 2007 and hold MFAs in dance from the University of Maryland.

Aside from the dancing bodies onstage, both Krogol and Reeves refer to technology as another body in the space. 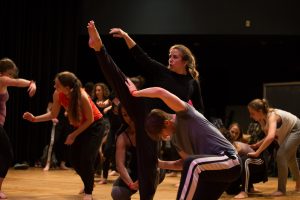 “We talk about the technology being alive,” says Krogol. “Sometimes it’s affecting us and sometimes we’re affecting it.”

“You have to figure out your relationship and how to partner with it,” adds Reeves. “Our work is task-based and the performers almost have to survive the elements that have been set up on the stage. We do that intentionally because it really changes what the performer is doing and feeling and taps into that kinesthetic empathy in the audience to go somewhere with you.”

Krogol and Reeves practice virtuosic athleticism in their movement, a cadence that permeates their contemporary dance vocabulary with actions that shoot them across the stage, and contact improvisation that connects bodies in space. Based in Washington DC, Orange Grove Dance has premiered works nationally and internationally. At HCC they’ll perform Holding, Here and Frequency.

Their newer work, Frequency revisits the company’s origins as Krogol and Reeves pored over archival footage and reexamined how to attune to one another physically.

Holding, Here, is an excerpt from their evening-length work Waking Darkness, Waiting Light. The piece is based off of mythopoetic research into Krogol’s personal dreams and stories of her family’s migration from Cuba in the 1980s.

“[Holding, Here] is a big transformative moment from the larger work about the world you’ve left behind and starting over with just what you’ve carried with you,” describes Reeves. “We use the ladder to transform ourselves and get from one side of our past into an unknown future, while peering into the void of what’s to be.”

Orange Grove Dance has developed a language for working with their collaborators, flowering into a symbiotic relationship between projections, props and physicality.

Reeves remarks how they’ll use terms like “cross fade” and “jump cut” to pinpoint choreographic moments. When working with designers they’ll question who is initiating movement and speak in dance terms about having elements partner one another. 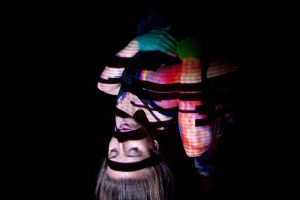 HCC Dance Professor Christina Acosta is looking forward to having the company share these insights with students. Acosta first connected with Krogol and Reeves when they participated in Tampa-based Moving Current Dance Collective’s New Grounds Festival several years ago. In bringing them to HCC, she hopes students in the program’s Dance and Technology course will benefit from experiencing Orange Grove Dance’s unique choreographic approach.

“When we bring guests to work directly with our students hands-on, it exponentially changes their worlds,” says Acosta. “[Orange Grove Dance] understands our Florida dance community because they were a part of it, so it’s nice to have them come back.”

As Krogol and Reeves push against the limits of choreography, performance, lighting, music and projection, they also allow it to pull them in every direction. They find pleasure in witnessing work grow beyond the sum of their individual parts, and are grateful for their collaborators’ willingness to go along for the journey. In this same spirit, they hope to establish a bond with both the students and audiences of Tampa Bay.

“As performers you get to feel the magic of what the art form has to offer to people by tapping into imagery and ideas that feel familiar but that they don’t yet have the words for,” says Reeves.

“Dance is the poetry to the prose of the world and we need people to think metaphorically. We’re never trying to tell the audience something they already know, we’re just trying to position images in a dreamlike reality so that after you come out of the performance, we hope the audience is in a place where they’re unpacking it for themselves.”

Explore the work of Orange Grove Dance
at orangegrovedance.com 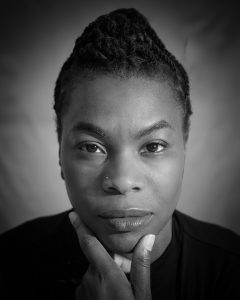 “I’m not a choreographer, I just have something to say,” says Charlotte Johnson, 2019 recipient of a Creative Pinellas Professional Artist Grant. “I am attracted to the raw realness of humans and people being people.”

Johnson quickly recognized the emotional power she commanded over an audience from a young age. This power grew in every performance, evident in her early training in St. Petersburg at The Academy of Ballet Arts and John Hopkins Middle School, and later on at the Pinellas County Center for the Arts at Gibbs High School and The Juilliard School in NYC.

She recalls people who approached her in tears, who felt something so deeply that sometimes they couldn’t quite name it. Each person was touched by the passion she imbued in every articulation and gesture. In these moments her codified dance training is apparent, and Johnson feels she most exhibits the strength, discipline and structure of her ballet foundation.

In one of her latest Creative Pinellas blogs, she terms herself a “dance preacher.” Johnson sees the evening-length performance of Who I AM: Journey to Freedom as a form of ministry.

Johnson was inspired by this theatrical genre after her time with choreographer Kwesi Johnson, as well as seeing DV8, a London-based physically integrated dance company. DV8 places dancers in speaking roles, something Johnson wanted to bring out in her work by utilizing spoken word artists alongside movers.

“[Journey to Freedom] is based on the stories and testimonies of the cast, so it’s real to us, therefore it will be real to the audience,” says Johnson. “Everything that is being recited is being drawn from us having conversations about what we’ve overcome.”

While the movements are driven by these conversations, they’re not literal interpretations. The most memorable rehearsal involved four dancers, three spoken word artists and four musicians sitting in a circle and listening to one another. Johnson says she is able to tell her own story through their words.

Journey to Freedom was first developed in 2014 and produced at Sarasota Contemporary Dance’s Voices concert in December 2018. 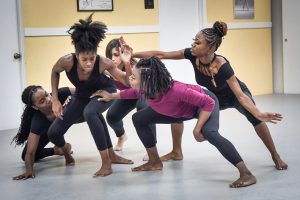 The topics covered in this iteration differ from when it first debuted. Issues have shifted from body image, loss of self, fear and mental illness to domestic violence, abortion, suicide and sexual addictions.

Johnson hopes that the work will continue to grow beyond its September performances — she envisions a continually shifting cast so that the topics are even more widespread and have the ability to touch even more people.

“I hope people leave feeling something that evokes some kind of change,” Johnson says. “This work is about changing peoples’ lives and helping them to overcome and heal.

“I hope the experience in the theater that day will plant a seed to make you look deeper into yourself.” 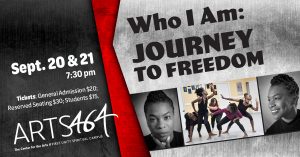